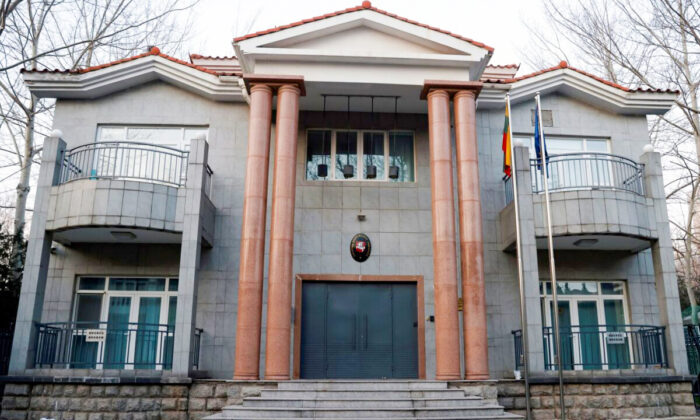 A general view of the Lithuanian embassy in Beijing, China, on Dec. 15, 2021. (Carlos Garcia Rawlins/Reuters)
Europe

When the Chinese regime resorted to political and economic coercion to punish Lithuania for leaving a voluntary grouping of countries led by China and growing its ties with Taiwan, Lithuania did not cave in and withstood the pressure with the support of the European bloc and other countries.

Lithuania informed the Chinese regime in February 2021 about its decision to withdraw from the “17+1” framework, said Diana Mickevičienė, Lithuania’s current ambassador to China.

Like other countries participating in the framework, Lithuania had high hopes to advance their exports to China, Mickevičienė told The Epoch Times. “China has been positioned as a very prospective market for [certain] Lithuanian products.”

Since the inception of the “16+1” platform in 2012, the successive Lithuanian governments made a lot of efforts in realizing that potential hoping to achieve a major breakthrough in export to China but the numbers were growing very slowly, the ambassador said.

Despite having such potential Lithuania could not actually enter the Chinese market, despite its efforts, and for a decade it had been in talks with China about what went wrong, Mickevičienė explained.

The Baltic country planned to sell its high-quality wheat on the Chinese market but its efforts to advance wheat exports met with hindrances, the ambassador said. For example, in early 2020 several Lithuanian wheat containers were halted by the Chinese authorities due to allegedly being contaminated with a fungus that does not exist in Lithuania. Mickevičienė said that as an ambassador she tried to resolve the issue but to no avail.

Mickevičienė said she believes that wheat could have been blocked in retaliation for the country’s earlier proposal involving the Taiwanese in the general meeting of the World Health Organization made by then-Lithuanian Foreign Minister in his conversation with the Organizations Director-General Tedros Adhanom Ghebreyesus.

There were lots of barriers preventing Lithuania from entering the Chinese market which “were abolished so slowly or almost not abolished” so the country continued to have a trade deficit with China, Mickevičienė said.

Lithuania’s bilateral dialogue with China started turning into discussions with all forum participants, which became the second reason prompting Lithuania’s withdrawal from the forum, Mickevičienė said.

“We had our bilateral issues, but we were forced to sort of discussing them in the view of all the 17 countries, which we thought was not justified because the bilateral track is still the main track and every sovereign country wants to have a bilateral track.”

Moreover, in the last years, Lithuania has seen certain disguised attempts by China to offer “carrots” to separate countries or a group of countries, which in Mickevičienė’s opinion, were undermining the E.U. market.

“We’ve seen certain efforts of playing us against each other [and] against Brussels.”

Among the participants of the “17+1” platform are 12 E.U. member states from Central and Eastern Europe and five Balkan countries which are potential candidates to the Union.

The E.U. single market is an entity enabling the free movement of people, services, goods, and capital throughout the territories of all participating countries, according to the European Commission’s website.

Lithuania’s Foreign Minister Gabrielius Landsbergis told BNS (Baltic News Service) when Lithuania’s withdrawal was announced that the “17+1” is a “divisive format,” according to The Baltic Times.

“I would urge all E.U. member states to seek a more effective 27+1 attitude and cooperation with China. Europe’s unity is what makes it strong and influential,” Landsbergis said referring to the 27 members of the European Union.

Lithuania also hoped to attract some transit from China due to the Baltic country’s favorable geographical location, Mickevičienė said. “We are very much on the crossroads.”

China has been also interested in Lithuania’s only seaport but the Baltic country has very strict foreign investment screening laws which limit investing in the country’s critical infrastructure to members of NATO, the E.U., and OECD (The Organization for Economic Co-operation and Development), the ambassador said. This rule by definition automatically excludes China, she added.

The Chinese seemed to understand Lithuania’s decision to leave “17+1” but asked the country to not make it public and Lithuania agreed, Mickevičienė said.

Beijing, however, kept on inviting the country representatives to “17+1” meetings and was displaying the Lithuanian flag during these meetings without the country’s permission, she said. The Chinese regime did not honor its own commitment that the participation in the “17+1” is voluntary, she added.

The Lithuanian government had no other choice but to make its decision public and announced it in May 2021, the ambassador said.

After the announcement, the Lithuanian embassy immediately started feeling the consequences, as its cultural projects had been stalled, Mickevičienė said, adding that the Chinese party started declining her meetings.

Chinese students who were studying the Lithuanian language were prevented, under various pretexts such as COVID-19 restrictions, from attending the cultural events held by the Embassy, she said. Galleries and private museums refused to deal with the Embassy saying that they were informed about Lithuania being on the list of unfriendly countries and for their own safety, they decided to avoid any collaboration, the ambassador said.

Two months later, Taiwan’s Foreign Minister Joseph Wu announced the opening of a representative office in Lithuania under the name of “The Taiwanese Representative Office,” drawing the ire of the Chinese communist regime.

Although Taiwan has its trade and cultural offices in many European countries none of them is called the “Taiwanese Representative Office.” They bear the name of “Taipei,” the capital city of Taiwan in order to adhere to the “One-China policy.”

“One-China policy” is a tenet of the Chinese regime’s foreign policy which asserts that Taiwan is a part of China’s territory and there is only one sovereign state with the name “China.” The policy demands from other countries to not form ties with Taiwan.

Only a handful of countries around the world established formal diplomatic relations with Taiwan with the Vatican being the only one in Europe.

There was no particular reason for naming the representative office “Taiwanese,” Mickevičienė explained. “It’s a principle that a party that is setting up the office—it is choosing the name. We only agreed to it.”

The Lithuanian government had plans to tighten its ties with Taiwan several years ago to diversify the country’s economic partnership but the plans were delayed due to the COVID-19 pandemic, she added.

“We felt Taiwan being a smaller size economy, but also predictable market economy and of democratic nature [so it] could be one of the partners to diversify.” In addition, Taiwan’s focus on the high-tech sector was consistent with Lithuania’s traditional focus on laser and biotech industries which the country planned to develop, Mickevičienė said.

The experience of some Central European countries showed that their cooperation with the self-ruled island brought Taiwanese investments to their nations which in turn created thousands of jobs for their people, Mickevičienė said.

Taiwanese missions in those states played an important role in this cooperation so opening a Taiwanese office in Lithuania could also help Lithuania, a small country with little presence in Asia, to strengthen its partnership with Taiwan, she explained.

The idea of a Taiwanese office was discussed first with Beijing but their response was: “the others have made mistakes [by permitting Taiwanese office in their countries], but the Chinese would not allow [Lithuania] to make the same mistake,” Mickevičienė said.

“My government took it very seriously as something which was limiting our ability to operate as a sovereign country,” she stated.

Lithuania was also accused of violating the one-China policy to which it committed upon the establishment of diplomatic relations with China, the ambassador said. But the office opened by Taiwan has not been given any diplomatic status, so the one-China agreement has not been breached, she explained. “This is not an embassy or sort of semi-embassy.”

“Even the Chinese side themselves admitted in their written and verbal communications that we violated the spirit, but not the letter of the commitment.”

After the announcement, a huge number of Lithuanian businesses exporting products to China encountered hindrances from the Chinese, and even a direct train from a Chinese city to Lithuania was canceled, the ambassador said.

The name “Embassy of Lithuania” was removed from the navigation system, Chinese customs have refused to deal with cargo, banks, and other institutions were informed that the Lithuanian Embassy no longer exists, she added.

The embassy personnel were given seven days to surrender their diplomatic accreditation cards which were the only legal basis for their stay in China, the ambassador said, adding that they did not have Chinese visas on their passports due to a visa-free agreement for diplomatic personnel.

The Lithuanian government decided then to evacuate all the embassy back to Lithuania on the first available flight, she said. “You can’t risk the well-being of your employees.”

“Depriving the existing embassy of its status, name, and IDs is unprecedented. And I think it’s … a huge violation of international agreements.”

Since then the Lithuanian Embassy to China operates from Lithuania as an online embassy and is only able to do certain parts of its job, the ambassador said.

The Chinese authorities have also effectively blocked imports from Lithuania by removing the country’s name from their customs systems, Mickevičienė said. A day or two later, the name reappeared but the systems did not process any requests if the country of origin was Lithuania, she continued.

Furthermore, the pressure was exerted on supply chains and international companies dealing with China to get rid of Lithuanian components in their products in return for access to the Chinese market, Mickevičienė said.

Although Lithuanian exports to China account only for less than 1 percent of the country’s total exports the country is home to hundreds of businesses making components used by international companies to manufacture products for the Chinese market, according to the Gatestone Institute.

The E.U. upon collecting evidence brought a case before the World Trade Organization against China for the economic coercion against Lithuania, Mickevičienė said, adding that her country received a lot of support from the E.U. and individual countries including the United States.

“The collective pushback resulted in more or less leaving alone the multinationals, the global supply chains, yet again, the situation is not completely clear and over.”

In February this year, China imposed an official ban on importing certain Lithuanian products such as dairy, beef, and beer, citing problems in sanitary compliance which Mickevičienė dismissed. To mitigate the impact, the Lithuanian government tried to assist businesses in redirecting the goods planned for the Chinese market, she added.

Lithuania has received political support from the United States since the early days when it stood up to the Chinese coercion and it also intensified its economic cooperation with the United States, Mickevičienė said. “Our exports to the U.S. have grown exponentially last year. So we may be losing the China market but I think we have opened a lot of windows into the U.S. market [as well as] other markets.”

“We may be a small nation but we are very proud of our sovereignty, we fought very hard to be a sovereign country so we can’t compromise on our sovereign decisions,” Mickevičienė said.