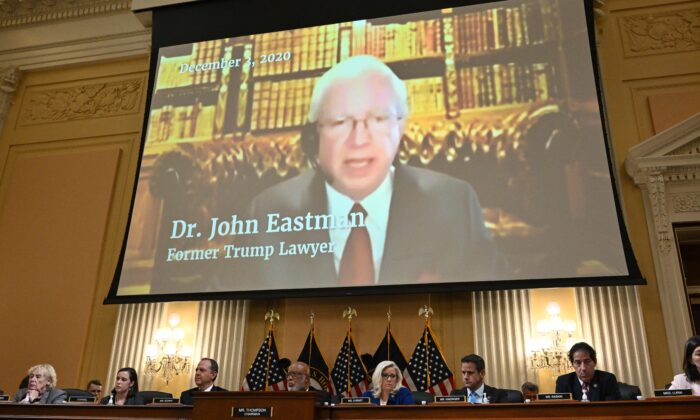 John Eastman, former lawyer of President Donald Trump, appears on screen during the fourth hearing by the House Select Committee to Investigate the Jan. 6 breach of the U.S. Capitol in the Cannon House Office Building in Washington on June 21, 2022. (Mandel Ngan/AFP via Getty Images)
Jan. 6 Coverage

A key lawyer for President Donald Trump who helped draft memos that sought to investigate claims of voter fraud in the 2020 presidential election told The Epoch Times that he backs the charges by a recent committee witness that the January 6 committee lied to the American people.

Witness and former Department of Justice (DOJ) attorney Ken Klukowski, who testified before the committee last week, said in a statement provided to The Federalist over the July 4 weekend, “The January 6 Committee falsely accused me on Thursday of being a go-between in a conspiracy to overturn the 2020 election. That accusation is false both in its broad outlines and its details.”

Trump critic and committee member Rep. Liz Cheney (R-Wy.) said that the testimony only shows that Klukowski was appointed to his DOJ position under the influence of Eastman—a claim that both deny.

Cheney claimed that together, they proposed to “overturn the election”—failing to mention this was only possible if they could prove any significant allegations of elections fraud—with the cooperation of Jeff Clark, a former assistant attorney general at the DOJ.

While it’s true that Clark drafted a letter that his bosses felt was inappropriate for the DOJ to present to the states over the election, according to the testimony presented in The Federalist, the connection between Clark, Eastman, and Klukowski to that letter is tenuous, according to Klukowski’s statement in the Federalist and Eastman’s account of his relationship with Klukowski.

According to Eastman, while Klukowski had worked with him on a memo that asked the state of Pennsylvania to grant the Trump campaign time to investigate claims of election fraud, he was also in quarantine for three weeks after catching COVID-19.

“At some point, Ken stopped working on this stuff because he had a government job and got appointed [to the DOJ position],” Eastman told The Epoch Times of their collaboration.

“The notion that I somehow placed him in the Department of Justice is just laughable,” he said.

Klukowski explained in his statement to the Federalist that he provided to the committee the September 2020 date he requested the transfer from the Office of Management and Budget to the DOJ.

“I also suggested the committee review our email exchanges confirming my testimony, since they clearly had access to that information,” Klukowski said.

A former White House staffer who coordinated DOJ appointments previously confirmed to the Federalist that the Klukowski move to the DOJ had started months before any calls to independently investigate allegations of election fraud and had nothing to do with the election.

“Ken’s transfer had nothing to do with the election,” said White House staffing coordinator Andrew Kloster.

The statement is part of a “dishonest … narrative that there was no basis for [these memos calling for independent investigations that we wrote] and that therefore, we knew what we were doing was illegal,” Eastman told The Epoch Times. “That’s just false.”

Eastman said that the committee is specifically lying in three different ways to advance the notion that what they did was illegal.

“Every time they use the word ‘baseless’ as describing our allegations of illegality and or fraud, that’s a lie,” Eastman said.

In fact, even before the election was held, some media outlets were claiming that any allegations of voter fraud were “baseless.”

An NPR news story published nearly a month before Election Day claimed, “In reality, voter fraud is extremely rare, though President Trump has repeated baseless claims about it being widespread.”

Eastman said that his legal argument to allow states to send alternate electors if voter fraud is proven isn’t novel, nor is his argument that there is ambiguity on the question of whether the vice president may delay the appointment of electors.

The idea that the vice president had the authority to nullify state electors had been out there “for decades, including by a lot of leftist professors, after the Bush versus Gore campaign,” he said.

Eastman pointed to an article in The Atlantic in September 2020 where legal scholars, including a group convened by UC Irvine, made the point that there is still a lot of legal ambiguity surrounding the vice president’s authority over accepting electors.

At the time, The Atlantic seemed to be worried that Vice President Pence could use his authority to slow down the counting of the electoral vote.

In reality, what the Trump campaign was trying to do was gain time for there to be a legitimate investigation of the vote totals in places like Arizona, Pennsylvania, and Georgia, Eastman said.

“We were seeking to have an investigation to see if the illegality affected the outcome of the election,” Eastman told The Epoch Times, stressing that there was no intention to illegally keep Trump in office.

Eastman also rejected the notion he said has been put forth by the January 6 committee that he ever asked Vice President Michael Pence to reject the electors outright and just declare Trump president.

“That’s not true,” he told The Epoch Times. “There are numerous examples of me saying exactly the opposite. There were others that urged that that be the outcome, but it wasn’t me.”

The media has used Eastman’s request for a presidential pardon as an admission of guilt, saying that he knew his legal representation of Trump was advancing a crime. He said that such logic is a fallacy.

Eastman said he only sought to be on a potential presidential pardon list after Jan. 6, 2021, because of commentary that his speech had been an incitement for the crowd to riot.

On that day, Eastman appeared at the Trump rally and told the crowd that they should demand Vice President Pence delay the acceptance of electors and investigate claims of election fraud.

“All we are demanding of Vice President Pence is this afternoon at 1 o’clock, he let the legislatures of the state look into this [allegations of fraud] so that we get to the bottom of it, and the American people know whether we have control of the direction of our government,” he said in his speech.

When jokingly approached initially by Trump lawyer Rudy Giuliani about appearing on a pardon list, Eastman at first refused.

But then, after “five days of lies that my short, 3-minute speech had incited the violence,” and that Jan. 6 was an “insurrection,” he understood that whatever played out in the investigation wouldn’t be controlled by legalities, but politics.

“It was explicitly tied to the lies about my speech, and had absolutely nothing to do with my legal representation of President Trump or the efforts regarding state legislative authority,” he said of the potential presidential pardon.

The Epoch Times has reached out to Trump, Giuliani, Cheney, the January 6 committee, Clark, and Klukowski for comment.