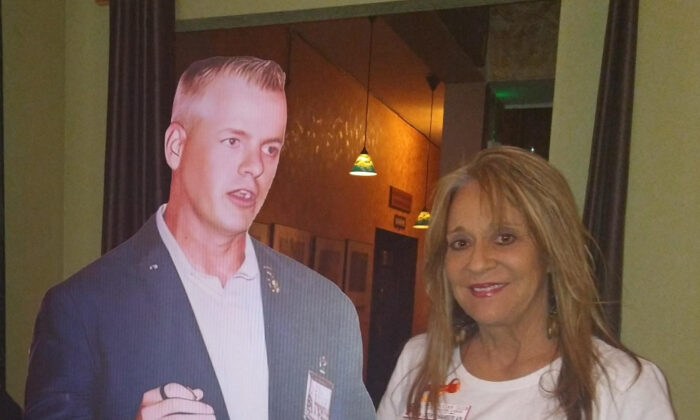 Cathi Chamberlain poses for a photo with a cardboard cutout of Jeremy Brown, a Jan. 6 prisoner and official candidate for the Florida House of Representatives in District 62. Chamberlain is Brown's "campaign commander." (Courtesy of Cathi Chamberlain)
2022 Midterm Elections

Volunteers will dress in 'orange jailhouse scrubs.'
By Patricia Tolson

While some candidates in the 2022 and 2024 election cycles have been described as unusual, unqualified and even dangerous, one stands out to have a place in the history books.

Jeremy Brown, 47, is running for the Florida House of Representatives and directing his campaign from a jail cell. He’s being held in Pinellas County Jail and is charged with entering and remaining in a restricted building or grounds and disrupting the orderly conduct of government business due to his presence at the U.S. Capitol in Washington on Jan. 6, 2021.

In an exclusive interview with The Epoch Times, Cathi Chamberlain—journalist, podcaster, and author of “Rules for Deplorables: A Primer for Fighting Radical Socialism”—explained how she came to set all of that aside to bear the unique title of “campaign commander” for Brown.

Chamberlain met Brown when he was a guest on her podcast, “The Deplorable Report,” in June 2021. A mutual special forces friend had reached out to her and asked if she wanted to interview someone who was exposing the alleged FBI infiltration of protestors on Jan. 6.

“So, of course I was really interested in the story and so I had him on my podcast,” Chamberlain told The Epoch Times. Since then, while they have yet to meet face-to-face, they have remained friends “just over the phone.” During those calls, Chamberlain said she learned all about his story and “found him to be a real patriot, incredibly intelligent, and well-versed on the Constitution.”

The Florida Constitution requires state representatives to be at least 21 years old. They must reside in the district where they’re elected and must have lived in Florida for at least two years prior to the election.

But just as with the U.S. Constitution, the Florida Constitution has no law barring a candidate from running for the position of state representative while incarcerated or after having been convicted of a crime, including a felony.

Brown ran for a seat in Florida’s 14th Congressional District in 2020 but dropped out before the Aug. 18, 2020, primary. This time, he is seeking to represent Florida’s District 62 as a state representative.

Brown is the only Republican in the race, meaning that after the Aug. 23 primary, he’ll face off against the Democratic nominee. The filing deadline for the Florida primary is June 17, and three Democratic challengers have announced their intention to run against incumbent state Rep. Michele Rayner: Wengay M. Newton Sr., Trevor Mallory, and Jesse Philippe.

The Epoch Times reached out to the Florida Department of State’s Division of Elections seeking confirmation on whether Brown would be eligible to serve as a state representative if elected while incarcerated and if he could remain in that position, even if eventually convicted of his charges. As this has never happened in Florida before, the state officials said they’re currently investigating in order to provide a proper legal response.

Brown is a member of the Oath Keepers organization. According the their website, the Oath Keepers “is a non-partisan association of current and formerly serving military, police, and first responders who pledge to fulfill the oath all military and police take to ‘defend the Constitution against all enemies, foreign and domestic.'”

In an exclusive April 13 report by The Epoch Times, Brown provided a letter he wrote to the American people, stating that agents from the FBI’s Joint Terrorism Task Force (JTTF) had tried to recruit him as a confidential informant on Dec. 9, 2020. They allegedly wanted to gauge his “willingness to infiltrate law-abiding citizen groups that had no criminal history and certainly were not designated ‘terrorist groups,'” Brown said.

Brown said he was in Washington on Jan. 6, 2021, as part of an all-volunteer protective detail tasked with providing security for organizers and speakers at a legally permitted political rally. As he stood next to the stage waiting for President Donald Trump to address the crowd, Brown said he was again contacted by phone by one of the same JTTF agents who had allegedly tried to recruit him to spy on his fellow citizens. Brown told the agent where he was and what he was doing, so they knew he was at the rally. According to Brown, those same JTTF agents arrested him on Sept. 30, 2021. There is a Give Send Go account to help cover his ongoing legal expenses.

“I happened to be in the home of Jeremy and his girlfriend the day the FBI showed up,” Chamberlain said, calling her presence at the house that day “a strange fluke.”

“I found out they were having a garage sale and I thought, ‘I want to own something, even if it’s 50 cents, from an American hero,'” Chamberlain recalled. “So I drove over to Tampa and picked up the items I bought and he had mentioned the FBI had called that morning and weirdly enough, three hours later, they show up at his home in Roger Stone-style and arrested him.”

In the FBI complaint, filed the day before Brown’s arrest, federal officials admit that they have no photos or videos showing Brown inside the Capitol building, and that Brown had in fact told another person at the protest “not to enter the Capitol.”

The complaint still alleges that Brown “was more than 100 feet within the restricted grounds that law enforcement had originally set up to protect Congress and Vice President Pence during the certification of the Electoral College vote.” Federal officials also included a “publicly available photo,” submitted by an FBI witness on Jan. 25, 2021, showing Brown in “tactical gear” on Jan. 5, 2021, but the witness was unsure whether Brown entered the Capitol.

The complaint cites cell phone data that allegedly “pinged” a cell phone tower that placed Brown inside the Capitol building, but officials have no no other evidence to support that charge.

“Metropolitan Police Officers, in attempting to resecure [sic] the Capitol Grounds, advanced in a line and yelled ‘Back’ in unison,” the complaint states further. “Instead of voluntarily complying with police orders, BROWN only retreated when pushed with police baton sticks. During this encounter, BROWN repeatedly claimed that the officers were, in his opinion, violating the laws and the Constitution of the United States.”

The complaint did not include video evidence showing Brown helping a woman who was in danger of being trampled after falling underfoot along a line of Capitol police officers in a skirmish with other protesters.

The more Chamberlain learned about Brown’s case, she said, the more she wanted to get involved. She has remained in contact with him through email, phone calls, and visits to him in jail since his arrest.

“I saw the injustice that was being done and couldn’t help but get very active in his cause,” she explained, adding she has also started monthly rallies outside of the jail in Pinellas County. “We have Jeremy call in over a loudspeaker system into our rallies from inside the jail so he’s at every rally. He calls in and speaks to us all.”

About two months into Brown’s incarceration, Chamberlain said she half-jokingly proposed the idea of having him run for office from inside the jail. She told him if he did, she would put her entire life to the side and become his campaign manager.

Brown was being held in maximum security, and Chamberlain said she didn’t hear anything more about the campaign until the anniversary rally on Jan. 6, 2022.

“That’s when he announced it and said, ‘Any questions going forward, direct them to my campaign commander,’ which he insists on me being called,” she said. “That’s when I first found out I was going to be doing this, which totally took me by surprise. I was never thinking he would take me up on it.”

At a rally held on the one-year anniversary of the Jan. 6, 2021, protest in Washington, Brown spoke to the crowd through a loud speaker by phone from inside the jail.

He said the Department of Justice and the FBI’s Joint Terrorism Task Force has described people like him and those gathered there that day as “anti-government extremists.”

“We are not anti-government,” Brown asserted. “We are informed American citizens that know and understand our God-given rights.” He said they are “using every trick in their book” to cripple him in his defense “against their false charges” and his efforts to expose their alleged corruption and involvement in the staging of the Jan. 6 event.

“They have lied to judges to obtain illegal search warrants,” Brown asserted, which “allows them to manufacture fake evidence and false charges.”

He said the government is refusing to provide him with any access to evidence against him, that he has been illegally detained and denied bond, and that federal officials are preventing him from having access to his legal team, which inhibits his ability to prepare for his trial.

“They don’t want any evidence released to the public,” he said. “This is how scared they are of me.” More than that, Brown said “they fear the American people learning the truth.”

“Unfortunately for the FBI,” he promised, “I will expose the truth, even if it costs me my life.”

Then came the announcement no one anticipated.

“Today, Jan. 6, 2022, from the maximum security section of the Pinellas County Jail, I, Jeremy Brown, announce my candidacy for Florida State House of Representatives,” he said to loud cheers and applause.

If elected, he also vowed “not accept any pay or compensation until our Constitutional Republic is fully restored.”

“Please direct all your questions to my campaign commander, Cathi Chamberlain,” he added, to her surprise.

The sound of a mechanical recorded female voice came through the speaker stating, “You have one minute remaining.”

“Cathi Chamberlain,” Brown said further, addressing her directly as she wiped tears from her eyes, “who has just learned her offer was accepted. Always be careful of what you ask for.”

“May God hear our cries for justice and liberty, and restore our once great republic. De oppresso liber. Liberty or death.  Thank you,” Brown said, as his voice broke with emotion, “and I love each and every one of you.”

Four months later, on May 12, 2022, Chamberlain stood next to her ever-present cardboard cutout of Jeremy Brown and proudly announced at the Hillsborough County Republican Executive Committee Candidate Forum in Tampa that Brown had successfully crossed the petition threshold. He has a campaign website, which outlines his three top priorities, if elected.

Chamberlain promises “this is going to be an incredibly interesting campaign.”

“We’re going to dress up all of our volunteers in orange jailhouse scrubs, and their ID badges will be like mugshots,” she said. “We’re going to call so much attention to this in such a way people have never seen before.”