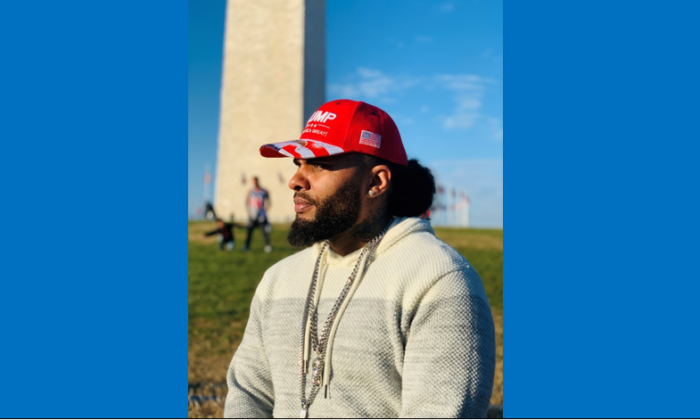 An Indiana man who was sentenced to four years of incarceration and three years of supervised release for a drug charge from 2017 insists the “judge took into account” his presence in Washington on Jan. 6, 2021, to punish him “two times.”

In February 2021, 33-year-old Kash Kelly of Hammond, Indiana, was sentenced for conspiracy with intent to distribute cocaine and marijuana when he was a Latin King gang member in Chicago. The gang was founded there in the mid-20th century and has become a major drug trafficking organization, according to the Department of Justice.

According to the January 2017 complaint against the Latin Kings, charges against nearly 40 other gang members included arson, racketeering, and murder. Kelly was charged only with drug conspiracy and was allowed to go home on pretrial release. But he’s currently being held at the Central Detention Facility in Washington pending his trial for misdemeanor charges from Jan. 6, along with several other Jan. 6 defendants.

While Kelly was on pretrial release in 2021, he traveled to Washington to protest against the certification of the 2020 election. As a condition of his pretrial release, Kelly was allowed to travel throughout the country as long as prosecutors approved the trip and knew where Kelly was going and how long he would be there, according to court documents. While Kelly said he received permission from his attorney to go to the Capitol for the protest, federal investigators claim they gave no such permission and that Kelly misled them by saying he would be going to Texas, not Washington.

According to the criminal complaint filed in the United States District Court on Jan. 15, 2021, Kelly has been charged with two misdemeanor offenses related to his presence at the Capitol on Jan. 6: Knowingly entering a restricted area and violent entry and disorderly conduct on Capitol grounds. Kelly said police invited him in, and several videos from the Capitol security cameras show protesters walking in calmly with police ushering them forward.

According to Kelly, the severity of his current sentence had more to do with the judge’s prejudice regarding the Jan. 6 protest in 2021 than the 2017 conspiracy drug charge. Statements made by the judge and prosecuting attorney during the course of Kelly’s sentencing hearing, and other court documents, appear to support his claim.

According to the transcript of his Feb. 15, 2021, sentencing hearing, obtained exclusively by The Epoch Times, discussion about Kelly’s gang activity was followed by heartfelt character testimony, given by numerous people regarding the value and positive impact Kelly brought to his community in the years after he left the Latin Kings.

Nozick stated that Kelly wasn’t supposed to be in Washington.

“His motion said, ‘I need to go to Texas.’ I agreed to it. The defense can make their arguments whether it was miscommunication between them, but certainly, there’s reasonable inference that he didn’t tell the Court and tell probation he was going to Washington because they knew what was going on in Washington and you, know, so he says he went to Texas.”

While Kelly’s attorney, Joshua Adams, argued that his client’s activity on Jan. 6 had nothing to do with his gang-related charges, Nozick said, “it’s immaterial whether the new criminal conduct is related to this case or not. He was part of a violent insurrection on our nation’s Capitol.”

Simon said that if Kelly had requested permission to go to Washington to protest and march peacefully, the judge would have said “go for it,” and that he had a constitutional right to state his beliefs.

“But when you go inside the Capitol while the democratic process is actually occurring, while they’re actually counting the electoral votes for the peaceful transfer of power in this country, that is so fundamentally wrong. It’s just wrong,” Simon said.

Simon said he was particularly offended by the photo of Kelly standing on a platform with his arm around a statue.

“When I see somebody inside the rotunda with a big smile of their face and the arm around one of our Founding Fathers, a statue, to say it’s a bridge too far doesn’t quite capture it,” he said.

In the photo, Kelly was posing with a statue of Charles Brantley Aycock, who was elected governor of North Carolina in 1900. The statue is in the crypt beneath the Capitol Rotunda.

Nozick went on to say he was troubled by Kelly’s statements accusing his attorney of neglecting to request permission for Kelly to go to Washington, and said it wouldn’t have mattered if Kelly had gotten permission to be in Washington.

“If the motion said he could travel to Texas and Washington and he got charged for what he did and did what he did at the Capitol, the sentence would be the same,” Nozick said. “The defendant isn’t receiving extra time for whether the motion mentioned D.C. or just Texas. Obviously, being out of district is a violation but it was the actions and getting charges that is playing a role in determining the sentence.”

The judge later agreed. “It’s not so much the travel to Washington that matters. It’s what happened in Washington,” he said.

There is a large discrepancy between what Kelly’s defense attorney believed was a fair sentence for the drug charge and what Nozick requested.

According to the sentencing memorandum filed Feb. 3, 2021, Kelly and his attorney requested a sentence of one year and one day in custody. Prosecutors requested four years and three months.

By the time of his sentencing, Kelly had spent two years helping federal investigators prosecute gang members, at serious risk to his own life, and had become a positive influence in his community, but the judge imposed a sentence of 48 months in prison and three years of supervised release, which is just three months shy of prosecutors’ request.

Kelly was standing before Simon to be sentenced for his 2017 conspiracy drug charge, not for allegations related to Jan. 6, 2021. Moreover, Kelly has been charged with two misdemeanors for his presence in Washington on Jan. 6 but he has not been convicted of any crime related to that day and has not yet had a hearing. In fact, Kelly contends his trial date keeps getting postponed.

“This whole thing has been so crazy,” Kelly said. “I’ve been waiting on a court date for so long. But they just keep continuing it and continuing it. I haven’t even had a preliminary hearing yet. I feel like I let myself get built up and prepared for an outcome and then I’m told I got to wait. It’s horrible. I haven’t had human contact for 16 months. I’ve been here for so long now in our nation’s capital I feel like it’s the most unamerican place in America.”

When Kelly became a father at the age of 18, he said he knew he had to turn his life around. By the age of 21, he had completely broken free from the gang. Since then, authorities have said he cooperated with federal investigators and has become a community leader advocating against gang involvement, encouraging witnesses to cooperate with police, and urging peace during the 2020 Black Lives Matter riots.

In order to become a more positive influence in his community, Kelly became a volunteer with Reclaim Our Kids, an organization that helps kids escape gang life, and he was an active member of his church. Kelly also founded the Streetlights Unity Movement, “to teach people how to be the change that they want to see in the world.” His Streetlight videos are made to educate those in the black community about truth in politics.

“I knew better, and I did better, and you can’t do better until you know better,” Kelly told The Epoch Times in an exclusive interview from jail. “I was raised truly messed up, so for me to be who I became and who I am becoming and who I am now, I’m proud of myself.”

Kelly’s girlfriend, Erica Nicole Conklin, said she was fully aware of Kelly’s past when they first got together, and she has stood by him for the past two and a half years. She too is “absolutely convinced” the judge’s sentencing was prejudiced by his opinions about Jan. 6.

“I was really disappointed in the outcome of the sentencing,” Conklin told The Epoch Times. “I was expecting house arrest, maybe restitution, home confinement, or maybe a GPS monitor. I did not expect them to give him four years. I didn’t even know how to respond. We had seven kids with us at the time. Then I had our baby. He was taking care of all of us. He was the provider for the family.”

According to Conklin, Kelly had returned home after going to Washington and “life was normal.” He wasn’t arrested until January 21, 2021. “It caught me completely off guard,” she said.

Kelly said his sentence came as a shock to many in the community. This had come long after he had broken from the gangs and become a pillar of his community “Even the police officers that came to my house to arrest me were saying they were sorry, and they knew I didn’t have a lot to do with that,” Kelly recalled. “I told them I understood, and they brought me in.”

“I was sentenced to 48 months based on my previous case,” Kelly said. “The judge’s exact words were, ‘I can’t operate in a vacuum.’ He took into account Jan. 6 for my drug sentencing. So, I’m being punished two times.”