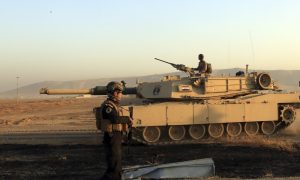 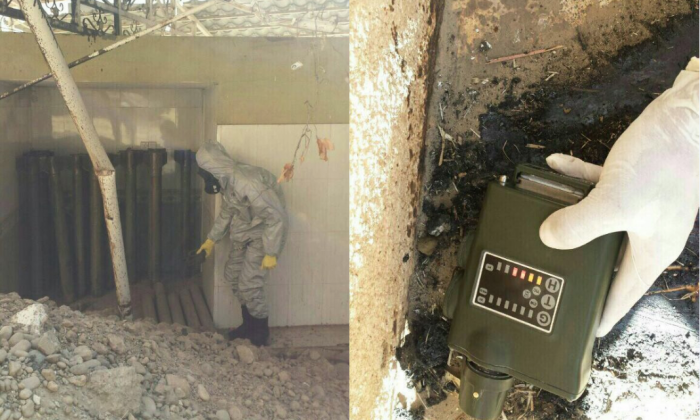 Iraqi troops have captured a cache of chemical weapons that formerly belonged to the ISIS terrorist group in Qayyarah, Iraq, just east of the terrorist organization’s stronghold in Mosul.

Photographs taken in mid-October of the weapons along with chemical readings from the stockpile of weapons were provided to Epoch Times by Ed Alexander, chief intelligence officer at BLACKOPS Cyber, a private intelligence company, who in turn received them from his ground team.

Sources from on the ground claimed the weapons were used for mustard gas, and readings showed residue of the chemical in the area. The BLACKOPS Cyber ground team was guarding the weapons until coalition forces could secure them.

The finding is near the same place where ISIS allegedly fired artillery shells filled with mustard gas at U.S. troops on Sept. 24. Joint Chiefs Chairman Marine Gen. Joseph Dunford initially said the shells contained “sulfur-mustard blister agent,” according to Military.com, although the military was still investigating.

The stockpile also adds credibility to growing concerns that ISIS is planning to use chemical weapons against U.S. and Iraqi forces as they push ahead to retake Mosul in the coming weeks—and that this could also harm civilians in the area.

Alexander noted that Iraqi forces asked coalition forces to help recover the weapons and contain them, and that the site contained 36 rockets. He said, “ISIS lost ground on their territory, and it was on that territory that those weapons were discovered.”

The images and information appear credible, according to two experts.

According to Drew Berquist, founder of OpsLens and a former intelligence contractor who recently returned from deployment in Iraq, ISIS has several factories for making homemade rockets throughout Raqqa, Syria; and in Mosul. He said, “That’s what these look like.”

He said the picture of the rockets is telling, “because they do that all over the region,” and that it’s likely ISIS has stepped up its production for the coming fight for Mosul because “they view this as an apocalyptic battle.”

Berquist noted that the rockets themselves can be fitted with different types of weapons, including chemical and explosive charges, and said ISIS has used chemical weapons. He said, “They’ve got them, and they’ll try to use them in the days and weeks ahead in Mosul.”

Bunker wrote in an email that the device held by a man in a chemical warfare suit in one of the photos is an LCD 3.2E made by Smiths Detection, which is used by soldiers, first responders, and police. The “H” on the display shows readings for blister agents, such as mustard gas, and the image shows a midrange positive reading for a blister agent.

Bunker noted that the individual in the photo is breaking protocol “by wearing surgical gloves in such a potentially contaminated environment.” He also said the individual is wearing a Level C PPE (personal protective equipment) suit, which offers only basic respiration and absorption protection, and “if he were more sophisticated, he would tape the suit around the gloves and the boots for a better seal.”

Another image shows an orange, discarded protective suit, which is suspected of having been used by ISIS terrorists in the area. The image also shows a workman’s glove and what appears to be a simple surgical mask. Bunker said the equipment would have given an ISIS handler “very little protection” from splash or absorption, and no protection from inhalation. He said, “If they were working with a hydrogen compound or even chlorine, they would start to get sick relatively quickly.”

Bunker said sulfur-mustard agents are the greatest danger ISIS can likely present when it comes to chemical warfare, which is below the danger of full-fledged chemical warfare with something like nerve gas. But mustard gas is also not to be taken lightly.

“This is a persistent blister agent whose use can be dated back to World War I. It can eat away at the skin, eyes, or lining of the airways and lungs causing large blisters to appear,” he said.