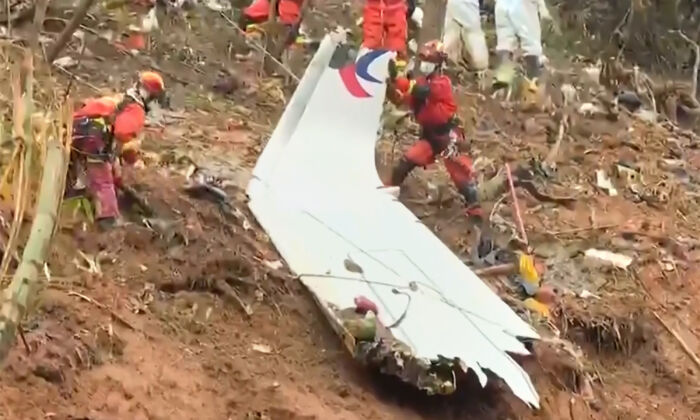 Rescue teams with a piece of the fuselage as they continue to search at the site of a China Eastern passenger jet crash near Wuzhou, Guangxi region, China. (CCTV via Getty Images/Screenshot via The Epoch Times)
China

Too Early to Determine Cause of China Eastern Crash: Former NTSB Official

A former official at the National Transportation Safety Board (NTSB) discourages speculation about the causes of the China Eastern Airlines Flight 5735 accident, urging the public to stay patient until black box data is read.

Barry Strauch, former deputy chief of the NTSB’s major investigations division, served as an air crash investigator for 33 years. He also holds licenses as a pilot and an instructor, and authored the book “Investigating Human Error: Incidents, Accidents, and Complex Systems.” Currently, he is the principal of Strauch Associates, which provides consulting and training services in human factors and transportation accidents.

The March 21 China Eastern accident claimed all 132 who were on board, including nine crew, and triggered global attention. Various guesses about causative factors have sprung up from technical problems to corporate operational issues, from pilot suicide to airplane kidnapping.

“I am continually amazed at the speculation about causation that an aircraft accident engenders,” Strauch told The Epoch Times on March 27. “But having worked on many investigations I am also amazed how often those who speculate early about an accident’s cause are then shown to be wrong in their speculation.”

The expert declined to identify contributing factors to the tragic event prior to the readout of black box data.

“It is very difficult to say at this point whether it is a mechanical- or human-caused event or both,” he said. “It is also possible that a mechanical issue with the airplane precipitated an inappropriate crew response that made a benign event to a catastrophic one.”

However, the expert deemed the chances of mechanical trouble as extremely low, based on the safety records of the Boeing 737-800 and China’s aviation industry over the last decade.

George Chiu, a Canada-based insider with more than 10 years of industry experience in China, echoed Strauch’s analysis in a March 27 interview.

“Unlike the 737-Max, the 737-800 is a mature plane model in China that has been in service for more than a decade,” said Chiu. “A mechanical trouble is highly unlikely, not to mention the cruising height at the time of the accident.”

Chinese authorities said they have recovered the two black boxes from the flight, a badly damaged cockpit voice recorder (CVR) and a flight data recorder (FDR). Though often referred to as “black boxes,” they are actually painted bright orange to to aid in their recovery after accidents.

Strauch maintained that a full investigation would take roughly 18 to 24 months to complete either in the United States or in China, depending on the complexity of the investigation and analyses, investigators’ workload, manpower availability, and other factors.

“It takes a long time to collect all of the data, write it up, analyze it, and put it all together into one investigation report,” the former NTSB veteran said. “Because the cost of getting it wrong is so high, investigators review the report multiple times to assure that it is accurate and effectively presents the viewpoint of investigators.”

“By the same token, investigators should be fully aware that the longer it takes to complete the investigation, the less impact the findings will have on the aviation community and the general public, as interest in an accident wanes over time,” said the expert.

According to Strauch, the two flight recorders should provide investigators with most of the information they need to figure out the causes. The CVR that records cockpit sounds normally provides what the crew said during the event and what sounds they heard. The FDR should inform investigators of what the airplane was doing before and following pilot statements because it records hundreds of parameters about the airplane, its control surfaces, systems, engines, and pilot actions.

Their data can even suggest whether an abduction or a pilot suicidal act occurred in the cockpit, said Strauch.

“Hijacking cannot be called the worst scenario [for flight safety],” Chiu told The Epoch Times. “The pilot can immediately press the button ‘transponder code’ to report the abnormality to the area controller. One second will be okay.”

The Chinese rescue team formally announced on March 26 there were no survivors in the flight crash after six days of scouring the mountain in the southern Chinese region of Guangxi, according to state media.