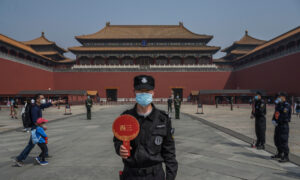 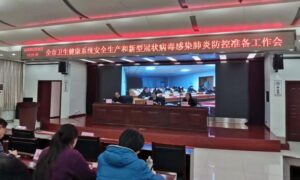 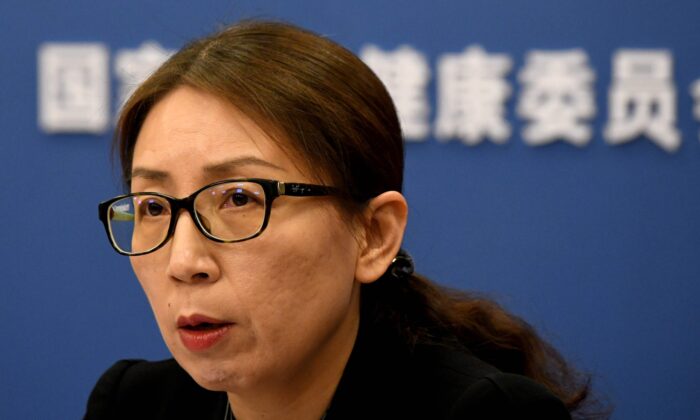 5 Secrets of the CCP Pandemic Coverup Revealed in Leaked Documents

The Epoch Times recently obtained a trove of documents, including an internal notice about a confidential teleconference on Jan. 14 with provincial and municipal health officials.

This confidential notice asked all relevant officials to attend an online training at 10 a.m. on Jan. 15.

The training session focused on how to proceed with the diagnosis and treatment of CCP virus infection, containment policy, and deployment of medical assistance in hospitals according to instructions of the NHC.

Another document is titled, “Teleconference talk on new coronavirus by director Jiao.” Jiao refers to Jiao Yahui from the commission’s Medical Administration and Supervision Department.

The document was a transcript of a presentation given by Jiao Yahui on Jan. 15 regarding the CCP virus.

According to an Associated Press (AP) report published on April 15, internal documents obtained by AP revealed that the head of China’s NHC, Ma Xiaowei, laid out a grim assessment of the coronavirus situation during a confidential teleconference on Jan. 14 with provincial health officials.

The transcript obtained by The Epoch Times revealed that Jiao Yahui mentioned that “Director Ma gave an important talk on the teleconference report on the coronavirus situation yesterday morning.” From this comment, it can be inferred that the teleconference Jiao Yahui participated in was the one held on Jan. 15.

Five Secrets Revealed in the Transcript

During the teleconference’s training session, Jiao Yahui’s presentation disclosed five major key points that have been hidden by the regime.

1. The CCP was aware of the outbreak

At the beginning of the talk, Jiao asked “everyone to maintain a high degree of vigilance,” because “everyone’s perception of this work is indeed different (from what’s demanded), and there is a big gap.”

When Jiao reminded officials of all localities to “keep a high degree of vigilance,” it was during the peak season of travel during the Chinese New Year. At that time, the CCP vehemently denied human-to-human transmission of the virus, and eight doctors were punished for “rumor-mongering.” The truth of the epidemic was kept not only from the general public, but also from medical staff at the grassroots level.

Jiao Yahui, as a senior health care committee member and insider, issued warnings at internal meetings. This shows that the CCP was very clear on the fact that the CCP virus was highly contagious and concealing the truth would lead to a severe epidemic.

2. The regime prioritizes discipline and stability over public health

Before discussing the specific work, Jiao repeatedly emphasized discipline, “that is, we want to make the inside tight and the outside loose.”

Jiao said, “Don’t create panic and instability in society” because Chinese New Year is coming. She specifically emphasized, “Everyone should not disclose in the circle of friends and the internet, but only for internal use at work.”

Jiao’s statement confirmed what’s believed to be the regime’s decision to conceal the truth to preserve the festive holiday atmosphere and social stability at the cost of missing the golden time to prevent the spread of the outbreak.

A Hong Kong media report in February indicated that Xi Jinping was notified in early January about the outbreak and prevention mechanisms, but at the Politburo Standing Committee meeting on Jan. 7, Xi requested such measures not to affect the festive atmosphere. An opportunity to prevent the spread of the epidemic was thus missed.

Jiao spoke about the formation of a team of experts specializing in “respiratory, infectious, acute care, imaging, and examination,” and “preparations” of supplies including protective gear, disinfectants, and antivirus products and medicines.

It is worth mentioning what Jiao specifically emphasized: “to strictly implement the diagnosis (procedure) of the first case.”

It is required that diagnosis and publishing the first confirmed case cannot be done by local authorities. It must be “confirmed by state and published by province.” That is, the testing and confirmation will be done by China’s National Disease Control Center (CDC).

Jiao also emphasized that even after the first confirmed case is made, subsequent cases still need to be “reviewed and approved by the national CDC laboratory,” and the diagnosis and public announcement are organized by the province.

Jiao said, “This is a discipline.” She also said, “The first case in each province must be diagnosed by a national agency, and then released in the province.”

Jiao said, “Especially if there are many death cases, it will easily cause panic in society, panic about disease and an epidemic situation.” Jiao said about reducing the mortality rate, “this is the focus of our critical care.”

Political commentator Li Linyi pointed out that the critical care and mortality rate proposed by the NHC and Jiao Yahui are more to prevent “triggering social panic” than to respect and save life under the CCP rule. Li Linyi believes Jiao was following Xi Jinping’s instructions, that is, she was implementing a policy of maintaining stability, not following standard medical procedures.

A Jan. 16 report from the CDC of Chengdu city, Sichuan Province, proved that the “rule” of prohibiting local authorities from confirming cases was strictly followed.

The report said that on Jan. 15, the hospital took a sample from Yang onsite and sent it to the CDCs of both Chengdu and Sichuan for testing. On Jan. 16, the provincial CDC reported that his sample tested positive in a nucleic acid test.

Based on this, the Chengdu CDC made a “preliminary investigation conclusion” in the report: “This case is an observation case and diagnosed as a new coronavirus-infected pneumonia case. Further confirmation is required to combine with the national CDC diagnosis.” In other words, the case was not confirmed at that time.

In fact, according to China’s Jan. 21 epidemic briefing, as of Jan. 20, only Hubei Province, Guangdong Province, Beijing, and Shanghai had “confirmed” cases. This shows that the national CDC failed to confirm Yang’s test on Jan. 16.

This report from Chengdu city confirmed part of Jiao’s talk—that is, local officials are not authorized to “confirm” cases. Even if the patient samples test positive by the provincial CDC, they have to wait for the national CDC’s review and approval to be recognized as confirmed cases.

The Epoch Times Reports Numerous Coverups by the CCP

The Epoch Times has repeatedly exposed internal documents that revealed the CCP’s coverup of the epidemic.

For example, a document from the regional health commission in northern China’s Inner Mongolia, revealed details about the NHC’s instructions on how local health agencies should deal with the new disease (now known as COVID-19).

It asked hospitals to take measures to prevent the disease from spreading inside their facilities and train staff on such actions. It also asked hospitals to set up fever clinics and to “pre-screen and triage” anyone experiencing a fever, to determine levels of urgency for treating patients.

The notice was marked “for internal use only, and cannot be distributed on the internet.”

Commentator Li Linyi said this document shows that the CCP long knew that the virus was highly contagious and may spread rapidly, but insisted on concealing that information from the public.