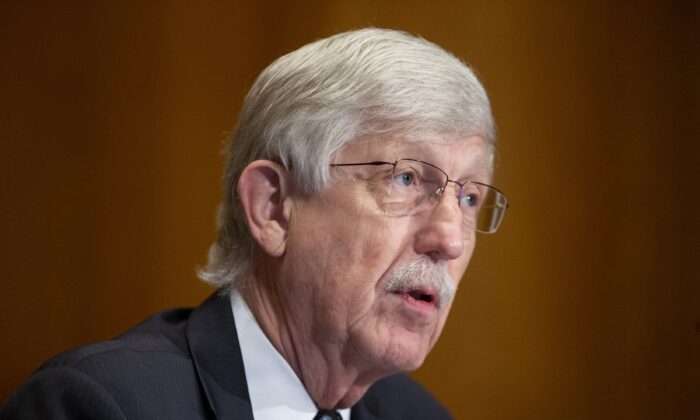 Dr. Francis Collins, a top U.S. health official, was caught off-guard when he was asked for the first time about a report issued by members of Congress that revealed new information, including the email Collins sent urging a “takedown” of the Great Barrington Declaration, according to an email obtained by The Epoch Times.

Collins, the head of the National Institutes of Health (NIH) until Dec. 19, 2021, called for a “quick and devastating published takedown” of the declaration, which called for a more balanced approach to combating the COVID-19 pandemic, in an email in October 2020.

The email, sent just days after the document was authored by three epidemiologists, was made public by a congressional panel near the end of 2021.

In an appearance on Fox News just hours after the panel’s report was released, Collins was confronted about the email for the first time. Host Neil Cavuto asked Collins about the report’s claims that the White House under President Donald Trump made attempts to “undermine the COVID response.”

Collins, now a senior investigator at the NIH and a top adviser to President Joe Biden, said he was “trying to stay out of the political side of this” and declined to comment before Cavuto asked about the “takedown” email.

“Yes, there were people, particularly Dr. Scott Atlas, that said don’t worry about this business of putting on masks or asking people to isolate themselves or stay physically distanced, ‘just let it rip’ and let this virus run through the country until everybody has had it, and then we’ll have herd immunity,'” he added. “But the consequence of that would have been hundreds of thousands of additional deaths. That didn’t make sense to me.”

Atlas was a top health adviser to Trump.

The declaration doesn’t contain the words “let it rip,” two of its authors have noted. The document noted that lockdowns had a devastating impact on the United States and other countries and urged officials to implement more focused policies that protected the elderly and other people more vulnerable to COVID-19 while letting others live their lives.

Collins wasn’t expecting to be questioned about the email he sent to Drs. Anthony Fauci, Clifford Lane, and Lawrence Tabak, according to the email obtained by The Epoch Times from a Freedom of Information Act request.

“Apologies for the ambush,” Emma Wojtowicz, an NIH spokeswoman, told Collins in the missive.

“The producer said the interview would focus on Omicron and your time as director,” she added.

Wojtowicz sent a link to the congressional panel report and pasted the section relating to Collins.

Renate Myles, another NIH spokeswoman, told The Epoch Times in an email that Collins was surprised during the interview.

“His surprise was that the issue of the Great Barrington Declaration, which arose in 2020 and about which he has made his position clear on many occasions, was being raised in 2021 as if it were a new issue because of the release of a year-old email,” Myles said.

Collins spoke out publicly against the declaration in October 2020. The NIH has previously said people who want to learn about why Collins has described the declaration as “dangerous” should read Wikipedia.

Myles didn’t respond to a request by The Epoch Times for comment about whether Collins was aware his email had been made public before the interview.

“I never once advised the president or anyone else during my time in Washington to let the infection spread without mitigation,” Atlas told The Epoch Times in an email, adding that he advised in various settings “to increase protection, especially for high-risk individuals and settings, and I repeatedly stated in the media and in writing to follow recommended mitigations.”

At the same time, the more targeted approach advocated for by Atlas and the declaration “would have saved a massive number of lives while avoiding the death and destruction that ensued,” he said.

“The broad lockdowns advised by Collins, Fauci, and Birx were contrary to science, and they failed to stop the spread, they failed to protect the elderly from dying, and they killed and destroyed millions. It was the biggest failure of health policy in modern history.”

Fauci heads the National Institute of Allergy and Infectious Diseases, which is part of the NIH. Dr. Deborah Birx was a top health adviser during the Trump administration. They and Collins have defended the support for harsh restrictions imposed during the pandemic, including the forced closure of schools and so-called non-essential businesses.

Other emails obtained by The Epoch Times showed Collins writing to Fauci and Gregg Gonsalves, a professor at the Yale School of Public Health who has criticized the Great Barrington Declaration, or GBD.

Gonsalves told Collins and Fauci that he was reading the congressional report and how some people were circulating it as “‘proof’ of a conspiracy against the Great Barrington Declaration.”

“All I can say is thank you for your service, truly. The GBD has had a noxious effect on the American response to the pandemic and it doesn’t surprise me that you two were fighting back behind the scenes,” Gonsalves said.

“It’s interesting that an effort to call out genuinely dangerous recommendations from the GBD is called a conspiracy,” Collins responded. “Truth itself seems to have become a conspiracy in many minds.”