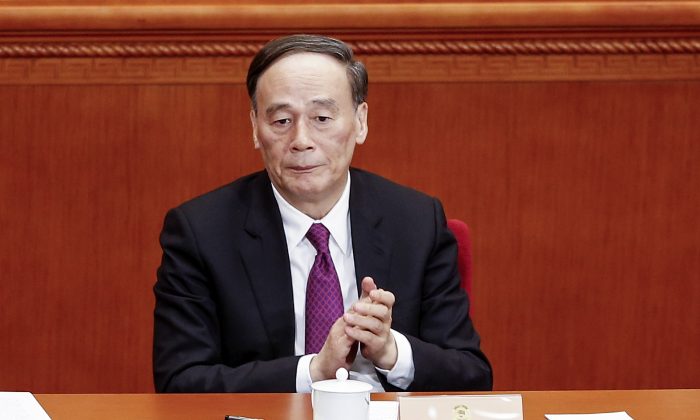 Exclusive: China’s Anti-Corruption Chief Will Be Exempt From Forced Retirement

Chinese leader Xi Jinping will find a “special arrangement” to retain Wang Qishan, head of the anti-corruption campaign, according to a high-level source familiar with state affairs in Zhongnanhai, the Chinese Communist Party’s headquarters.

The Party requires elite cadres to retire at 68. When it holds its 19th National Congress in 2017, Wang, who is also a member of the Politburo Standing Committee, the regime’s top decision making body, will be 67.

According to the source, Wang will be a unique exception to the retirement age. Three other Politburo Standing Committee members who are part of a rival political faction to Xi, led by former Party leader Jiang Zemin, will be forced to retire.

‘Rather the Devil Than Wang’

Xi and his supporters agreed that “Wang Qishan must remain in office,” despite the retirement age, because he’s their best candidate to head anti-corruption investigations and disciplinary reforms, according to the source.

Xi launched the anti-corruption campaign shortly after taking office, and vowed to crack down on both low and high-ranking officials who abuse their positions for personal gain. Xi also appears to be using the campaign, which is very popular with the Chinese people, to eliminate the faction of Jiang Zemin, the Party elder responsible for fostering pervasive corruption in China.

Wang was placed as head of the anti-corruption agency in 2012, and has overseen the arrest of more than a million officials—more than 200 of whom were high-ranking Party cadres in the government, state-run enterprises, and the military.

Officials are said to prefer meeting “the Devil” rather than Wang, a gaunt-looking man with a steely gaze. Under Wang’s watch, officials who were considered “untouchable,” like the former Politburo member Bo Xilai and the powerful security czar Zhou Yongkang, were probed and handed over for prosecution.

Wang has expressed his view that he has only “treated the symptoms” during his current tenure, and hasn’t started on “curing” China of corruption. The source said Wang hopes to reform the manner in which authority is supervised and “expand inner Party democracy” if he secures another five-year term at the 19th National Congress.

Another insider at the high levels of the Party told Epoch Times that Wang Qishan is “very willing to remain in office.”

How Could Wang Be Retained?

Wang may have the desire to delay his retirement, but Xi Jinping has to find a way to keep him around without upsetting Party norms on retirement, the source close to Zhongnanhai said.

The current informal age limit gives Xi a pretext to retire three Politburo Standing Committee members who are allies of Jiang Zemin. Thus, while a Chinese official dismissed the retirement “rule” as mere “folklore” at recent press conference, Xi has no intention of doing away with it completely.

What Xi could do, however, is cite an updated Party regulation that allows the bending of rules to keep exceptional talent in office, the source said, noting the regulation will be justified in Wang’s case because he “made enormous contributions to eradicating corruption, and is hence irreplaceable.” Xi could then leverage his role as the Party’s core leader to finalize this “special arrangement” and let Wang stay on in the Politburo Standing Committee.

Based on recent developments, if Wang gets another term, he could also see his power expanded.

On Nov. 7, the Xi Jinping administration announced a new anti-corruption commission that answers to the state, and not the Party. A pilot program has been rolled out in Beijing, and the provinces of Shanxi and Zhejiang. Given Wang’s credentials in busting communist cadres, it’s possible he will be called on to oversee the investigation of all public officials.