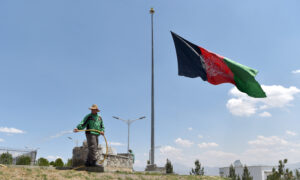 A U.S. Marine looks on as Afghan National Army soldiers raise the Afghan National flag on an armed vehicle during a training exercise at the Shorab Military Camp in Helmand Province, Afghanistan on Aug. 28, 2017. (Wakil/Koshar/AFP via Getty Images)
International

The speculation is occurring as the deadline for the U.S. troop withdrawal from Afghanistan approaches—a development that directly threatens India’s 550 community development projects, which are valued at multiple billions of dollars, inside the war-ravaged country’s 34 provinces.

The concerns are heightened because India doesn’t have any strategic footprint there and has been primarily involved in the capacity-building of Afghan people. At nearly $1.5 billion, it’s also the largest trading partner of Afghanistan.

The Indian Ministry of External Affairs, meanwhile, responded to some of the reports by saying that it’s engaging with “various stakeholders” with a goal of achieving long-term development goals and reconstruction of the war-ravaged country.

The Indian spokesperson didn’t completely reject the speculation nor comment on any particular report when asked. The English daily, The Hindu, called the spokesperson’s response a “hint at talks with Taliban.”

The Taliban on the other hand have rejected establishing any initial contact with the Indian government, according to Pajhwok, the Kabul-based Afghan News Agency.

In another occurrence that the Indian media termed “surprising,” Indian External Affairs Minister S. Jaishankar met the U.S. Special Representative for Afghanistan Reconciliation Zalmay Khalilzad at Doha, Qatar, to exchange “perspectives on Afghanistan and the region” on June 15.

Amid all the speculation, narratives, and statements, The Epoch Times talked with Amar Sinha, a former Indian envoy to Kabul who led India’s non-official delegation to the Afghanistan Peace process in November 2018 in Moscow.

Called the Moscow format, the talks included a high-level delegation from the Taliban, as well as a delegation of autonomous “High Peace Council” created by Afghanistan’s Karzai government in 2010 and 12 other nations. These talks were the first time an Indian delegation was present at any talks with a Taliban delegation from Doha, where some Taliban leaders are currently stationed.

The Epoch Times also spoke with Farid Mamundzay, Afghanistan’s ambassador to India, about the situation.

Sinha said that he has gone through the various media reports, the statement by the Indian foreign ministry, and also the Taliban’s statement of denial on establishing any contact with India.

“So, a bit sensational. The way that it was put there—a dramatic shift, or some said a u-turn in policy, and so on—I think it’s more of policy progression, as it has happened for everybody else,” said Sinha. To draw a fair analysis one has to look at what was India’s earlier position toward the Taliban, he said.

“We have always said that we support a negotiated settlement, we want peace. So that means it was accepted that the Taliban is part of the larger society and needs to be reintegrated peacefully.  And then, of course, come into our system… And don’t come in looking for complete monopoly and power, and so on.”

India’s policy progression is not shaped by an “external or global angle,” according to Sinha, who said this progression is natural, particularly since September of last year, when the intra-Afghan talks began.

“In fact, for the last two years, people were saying that India was out of step with what the rest of the world was doing—falling over each other to court the Taliban even at the cost of the legitimacy of a constitutional government,” Sinha said. While presence in every room and forum doesn’t imply an achievement, it’s time that India let it be known what it wants from the Taliban, he added.

“In one way or another. Be it at a lower level, intermediate level, or at a higher level,” he said, adding the engagement doesn’t stand detached from the desired outcome.

India is the only country in the region that hasn’t yet engaged “systematically” with the Taliban and has always maintained a very principled position in its engagements, Mamundzay said.

“If you look at the history of India’s involvement, the peace process, or engagement with the Taliban, New Delhi has been very cautious. Realizing that the Afghan republic should be respected and we have treated the situation that way. Kabul has been very pleased with the way India has dealt with Afghan affairs,” he said.

Sinha said when India sent a “non-official” delegation to the Moscow format, India’s position was that it would encourage the Taliban to reintegrate.

He said today there are unconfirmed stories about some contact having been made, and he’s not surprised by such reports.

“Because not only Afghan leadership, but even Americans and others have been asking us to engage with the Taliban,” said Sinha, who was the Indian envoy in Kabul from 2013–2016.

Mamundzay said the Afghan government didn’t participate in the Moscow format because of its doubts about the Taliban’s commitment to peace negotiations. India was “mindful about the sensitivity,” he said, and thus chose not to send serving diplomats.

“So, India’s record speaks for itself. India has never let us down, let Kabul down. Whenever there has been New Delhi’s participation in something, we have been kept informed; we have been closely consulted by Delhi,” he said. The two sides regularly consult each other and exchange visits by senior officials, including exchanges between the national security advisors of both sides, he said.

Both Sinha and Mamundzay said India’s principled stand arises from India’s commitment to the constitution of Afghanistan that the Afghan citizens have chosen.

“India’s connection is to the people of Afghanistan and the system they have chosen or created for themselves, which is in line with their won societal norms and ethos, and which the world would like to have,” said Sinha.

“Yes, India’s principled stand, which has not taken sides in choosing winners locally, or dictating what they need to do or not do, or what relations they have with the rest of the world, are all things that make India a very dependable partner,” he said. It’s a people-centric approach that respects “sovereignty and independence,” he said.

How Do the Taliban Understand India?

Ten years ago, in a conversation at the Asia Society in New York, the journalist Ahmed Rashid, a close observer of the Taliban, said that the Afghan Taliban no longer regard India as their enemy and have moderated their rhetoric over time.

Rashid was talking about a change in the Taliban’s anti-India stance. He, however, also said that this change in rhetoric against India doesn’t sit well with Taliban patrons and nominal allies inside Pakistan.

India had earlier been a serious target of attacks by the Taliban, particularly the Haqqani group—the best armed and trained factions of the Taliban, with close ties with Pakistan’s Inter-Service Intelligence.  A paper by Carnegie India’s Rudra Chaudhuri and Shreyas Shende said last year that despite possible reconciliation of the Afghan government and the Taliban, the Haqqani group might continue with its anti-India agenda.

The security vacuum created by the withdrawal of western troops from Afghanistan has already resulted in attacks against the Indian footprints inside Afghanistan. The attack on a gurdwara (a place of Sikh worship) in Kabul in March 2020 that killed 25 and for which IS-K claimed responsibility created apprehension that the Kabul government has repeatedly tried to address.

Mamundzay said the Taliban has been providing direct and indirect assistance to a number of terrorist organizations in India and in the region, and India’s security concerns are “legitimate.”

“In order for India to address those concerns, engagement with the Taliban is something that would have to be dealt with accordingly,” he said, indicating that India should ask the Taliban to cut ties with Al-Qaeda, with ISIS, and with other terrorist organizations targeting India both at home and abroad, in the way the United States has asked the Taliban.

“And we would respect that and would appreciate should Taliban choose to cut their ties with these terrorist organizations,” said Mamundzay.

Sinha said there are “incentives” for the Taliban to engage with India, an important neighbor and a regional country, and the Taliban has communicated that it wants development and partnerships to continue.

“India is part of the UN Security Council right now and heads the Sanctions Committee; one of the demands of the Taliban is that it should be delisted. So, for them to reach out to India independently, I will not find it very surprising,” he said.

Mamundzay said given India’s regional and international significance, the Taliban needs India. “The UN Security Council has three sanction committees where India presently chairs two committees including the Taliban Sanction Committee. So they need India’s support to delist their leaders,” he said.

“Second, India has a lot of convening power in the region and internationally. So the Taliban is mindful of India’s significance and strength.”

When India scrapped Article 370, which governs the special status of the former state of Jammu and Kashmir, the Taliban denied any link between the Afghan and Kashmir issue and said it doesn’t support Pakistan’s “Holy War” against Kashmir.

“Taliban had got nothing to do with Article 370. So that was a very bold statement, concerning the fact that it may not go well among certain circles from whom they receive support,” said Mamundzay.

“I think there’s a sense of realization that India would no longer tolerate the kind of behavior that would provoke them, given what happened in 2019 in the Balakot strike conducted by the Indian air force in Pakistan. The defense through aggressive measures displayed by the Indian armed forces is something that may also be of concern to the Taliban; that they would not be ‘free riding’ or conduct business the way they did in the ’90s,” he said.

The Balakot attack involved India targeting terrorist camps inside Pakistan territory on Feb. 26, 2019, in response to a suicide bomb attack on Indian paramilitary forces that killed 40 personnel in Kashmir.

Mamundzay, however, also said that today’s Taliban—in softening its policies, communicating its intent for development, and talking about Afghanistan not being any country’s proxy state—is actually trying to seek wider acceptance from ordinary Afghans.

The situation, however, continues to be difficult to predict, and more time is needed to analyze whether the change in the Taliban’s behavior is tactical or strategic, he said.

Mamundzay said in the past half-century, more radical and foreign Islamic scholars and jihadis have taken the stage to radicalize Afghan society. The increase in violence and political radicalization starting from the late 1970s was something not engineered by the Afghan people, but it was rather brought from the outside to serve the interests of many countries.

“These people fight on religious grounds, with a very limited understanding of Islamic theology themselves. They opposed the presence of international forces in Afghanistan on the basis of religion. Now as the troops are about to depart, they are opposing the national armed forces. How do they justify this?”

This article is the fourth in the series “Afghanistan’s Changing Situation Amid U.S. Troop Withdrawal,” in which The Epoch Times speaks with global analysts, lawmakers, thought leaders, and ordinary citizens within Afghanistan to gather a wider perspective on the situation inside the country. The first, second, and third articles may be read here, here, and here.