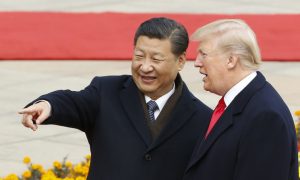 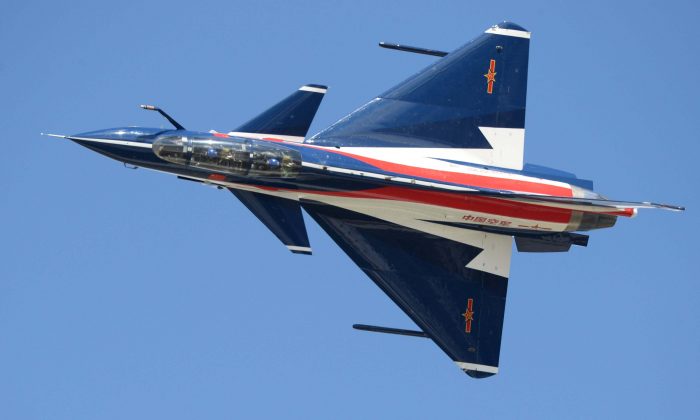 The Chinese regime's J-10 fighter jet performs at an airshow in Changchun, Jilin province of China on Sept. 12, 2015. The jet includes technology stolen from the United States. (STR/AFP/Getty Images)
Huawei

Exclusive: Pentagon Technology Found Its Way to the Chinese Military

The Chinese regime’s fifth-generation fighters, state-of-the-art naval cruisers, and soon-to-be-launched aircraft carriers are more deadly than they otherwise would be because they are equipped with advanced fiber-optic cable originally built for the Pentagon, according to a U.S. military intelligence officer.

The saga of this cable is part of a bigger story of how American military technology ends up with the Chinese regime’s military, an issue the Trump administration is seeking to address with sanctions and new legislation.

Fiber-optic technology transfers large amounts of information at very high speeds. It is a “dual use” technology, one used in both civilian and military sectors.

For public use, fiber optics carry telecom data, such as internet communications. For the military, fiber optics are used in ships, jets, and other systems to transmit high volumes of data. In a battle, the speed of these systems can mean the difference between victory and defeat.

A development contract was awarded by the Pentagon to a Japanese-owned company based in North Carolina, known as Sumitomo Electric Lightwave, to develop a next-generation fiber-optic cable. After the company developed the technology for the U.S. military, however, it began selling the fiber optics to private companies. Through its offices in Beijing, Sumitomo sold this technology to Chinese telecom companies ZTE and Huawei.

Anything we sell China … should be evaluated on whether that technology could end up killing our troops.
— Richard Fisher, senior fellow, International Assessment and Strategy Center

ZTE and Huawei have been no strangers to controversy. ZTE was sanctioned, and Huawei is under investigation for selling forbidden technologies to Iran. Both companies also have connections to the Chinese Communist Party’s military, the People’s Liberation Army (PLA).

A U.S. military intelligence officer speaking anonymously said that not long after Sumitomo sold this U.S.-funded fiber optics to ZTE and Huawei, the PLA got its hands on it.

The officer said he had seen intelligence that confirmed PLA military equipment is using the same fiber optics commissioned by the Pentagon.

“It wasn’t stolen. It was for civilian, or nonmilitary, purposes,” he said. “In China, it is being used for naval and for aircraft, like the J-10 jet, the high-end destroyers, cruisers, as well as for these evolving carriers.

“Sumitomo Electric Lightwave has been the leading edge of developing highly advanced fiber optics for shipboard use, as well as for fighter jets and drones.

“Some of the technology has inadvertently come into control of ZTE and Huawei.”

When it comes to advances in military equipment, underlying technologies such as fiber optics also need to keep pace to make the weapons systems effective. The officer noted that between nations, “it’s a constant race” to keep up with the development of systems such as fifth-generation fighter jets and shipboard weapons that process massive amounts of data. “If you, as an adversary, have access to that technology, you see generations of development.”

“The core issue of fiber optics is the ability to transmit data rapidly. Each new generation speeds it up. The faster you can transmit, the better it is,” he said, and added that there is “light-years’ [worth]” of difference between fiber optics technology today and that of 30 years ago.

According to Richard Fisher, a senior fellow with the International Assessment and Strategy Center, advanced fiber-optic cables such as those developed by Sumitomo, “would be very attractive to the PLA.”

To grasp the significance of fiber optics to military technology, Fisher noted that it’s important to understand a bit of history.

In a battle, the speed of these systems can mean the difference between victory and defeat.

In the 1970s, fighter jets moved to “fly by wire” technology, in which pilots controlled the planes by electric rather than hydraulic signals. Fisher said that for the fighter jets, this allowed for a “radical increase in maneuverability.”

The next development was with the introduction of fiber optics, referred to as “fly by light” technology. He said, “Compared to ‘fly by wire,’ fiber-optic cable allows for much more rapid and far greater transmissions of data.”

“Modern fighter radar and electronic warfare systems are dealing with data loads that are orders of magnitude greater than radar and electronic systems of the 1980s,” Fisher said. “The ability to move data faster could mean the difference in who calculates a fire solution first and shoots down the other guy.”

The officer said the same applies to missile systems. “The quality of rapid communications and high-speed data transmission is critical for effective missiles, and anti-ship missiles, and whatever missiles you can think of.”

According to an intelligence memo obtained by The Epoch Times, the Sumitomo technologies may have also been transferred to Iran. It states, “In Iran, the products ended up sometime between May 2009 and December 2009 with Isfahan Optics Industries, part of state-owned defense operation.”

It says these technologies are believed to be “a substantial quantity of FTTx Service Drop cable and about 30 (or many more) of the Type 39 Alignment Splicer.” The memo notes there is “limited information” on the exact quantities that were transferred.

It says the products made their way to Iran first through Malaysia, then through Dubai. It includes unconfirmed analysis on four additional companies believed to have been involved with the transfers to Iran.

The officer made clear that Sumitomo’s previous dealings with ZTE and Huawei do not appear to have been illegal. Yet, he said, the problem of dual-use technologies finding their way into hostile hands is becoming one the United States can no longer ignore.

“The suppliers, there is nothing nefarious about them—they are not trying to do something bad,” he said. Among the problems is that after technology is sold in a country like China, “technology suppliers don’t know how it will be used,” since there is no requirement for companies to know their end users.

He noted several additional cases. One involved a company selling technology to Iran for high-value specialty metal alloys. Although the initial use of the technology was benign, he said, “The exact same stuff can be used to build similar components for nuclear weapons—these were dual-use.”

Another case was a Shanghai steel company that was obtaining metal technologies from Western companies. The technologies were then used for PLA weapons programs.

“The issue here is, there is no restraint to using technology in questionable environments,” he said.

“One of the biggest culprits in this whole scheme is President [Bill] Clinton, because he freely allowed China access to advanced military technology, like the W88 nuclear warhead. There were no restrictions.

“The [CCP] gained 25 years of development by getting U.S. technology for free.”

Regarding the case of a Pentagon-financed program ending up in the PLA’s hands, the officer said that the Beijing office of Sumitomo “should have at least made the attempt to see who the true end user is … Japanese companies, U.S. companies, whatever, know that a transfer technology could be used for all kinds of things.”

He said it’s a common problem in China that a foreign company working there does so with the knowledge that the Chinese Communist Party will obtain their technology. “The moment you insert technology into China, it’s lost,” he said.

Fisher shared a similar perspective, saying, “The Chinese military-industrial complex is constantly scouring the earth for top-of-the-line technologies that can be applied to military systems China is developing.

“Huawei and ZTE are cat’s paws for Chinese Communist Party domination, and we should treat them as such in every conceivable way.

“The reality of China’s pervasive civil-military integration policies means that anything we sell to China will be evaluated for military exploitation. … Anything we sell China …  should be evaluated on whether that technology could end up killing our troops.”

In addition to employing sanctions, the Trump administration is proposing legislation that will make it more difficult for Chinese telecommunication companies to sell their products in the United States. The proposal would forbid money from the Federal Communications Commission (FCC) Universal Service Fund from being spent on technology or services of companies deemed a national security threat to U.S. communication networks and supply chains.

The U.S. Department of Commerce also recently announced that ZTE is banned for seven years from purchasing components from U.S. manufacturers as punishment for illegally selling telecommunications equipment that used American technology to Iran and North Korea.

Huawei could soon face similar sanctions and is now allegedly being investigated by the U.S. Department of Justice for violating sanctions on Iran.

ZTE and Huawei did not respond to requests for comment sent by email.

Sumitomo could not be reached for comment by telephone.