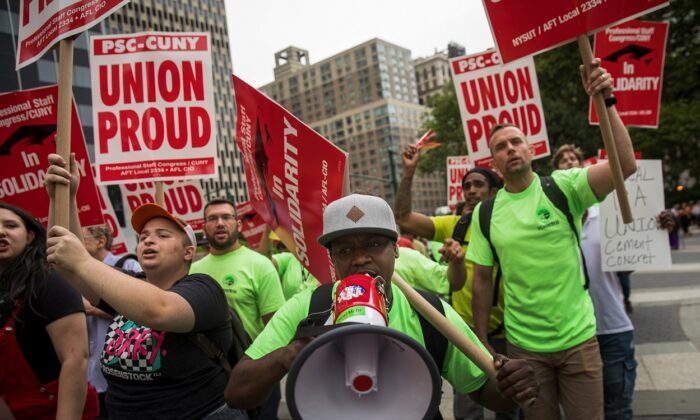 According to a recent watchdog report, the nation’s largest public service employees union spent $1 out of every $5 in revenue collected through union dues on politics in 2021.

According to a survey of 3,000 potential union members conducted in 2021, “excessive engagement in politics is the number one obstacle” preventing them from joining a union.

According to the report (pdf) by the public sector union watchdog Americans for Fair Treatment, America’s largest public service employees union—the American Federation of State, County, and Municipal Employees (AFSCME)—spent $28.6 million on activities to represent the 1.3 million members who belong to about 3,400 locals and 58 district councils across 46 states.

As for other expenditures, AFSCME spent $25.7 million on lobbying and politics and $57 million on union administration, general overhead, and employee benefits. AFSCME President Lee Saunders received a salary and disbursements of $367,221. Secretary-Treasurer Elissa McBride received $303,020.

AFSCME leadership spent another $3.4 million in membership dues on contributions, gifts, and grants to predominantly progressive groups like the Center for American Progress (CAP).

While describing itself on its website as “an independent, nonpartisan policy institute that is dedicated to improving the lives of all Americans through bold, progressive ideas,” Influence Watch exposed CAP as “a liberal Washington, D.C.-based think tank” founded by John Podesta.

“AFSCME spent more money on lobbying and politics last year than it did on representing its own members,” said David Osborne, CEO of Americans for Fair Treatment (AFFT), in a statement to The Epoch Times. “That tells us all we need to know about the union’s priorities. They mislead their members by calling themselves a union; the truth is, AFSCME is a progressive political organization.”

Spending a Lot of Money on Politics

Suzanne Bates is a senior writer and researcher for AFFT who scrutinizes and reports how unions spend the money collected through membership dues.

According to Bates, AFSCME represents approximately 1.3 million public sector employees across the United States. These are state and federal workers, firefighters, and police officers. They’re the ones driving the snow plows in local communities.

“There’s a misconception out there, especially among union members, that unions can’t spend their dues on politics,” Bates told The Epoch Times. “But what we have found as we look at the LM-2s, which are the forms that unions have to file with the Federal Department of Labor, is that unions are spending a lot of money on politics.”

Essentially, Bates said unions have become a fundraising arm of the Democratic Party.

“There have been a lot of surveys out there about how union members feel about their union’s involvement in politics, and in general, they don’t want their unions to be heavily involved in politics, especially in issues that have nothing to do with their daily work lives,” Bates said.

The Evolution of Unions

An October 2020 report from Strike Wave cited data from a survey commissioned by Data for Progress that revealed how the new reality of unions is “at sharp odds with common perceptions of union members as an overwhelmingly Democratic and progressive constituency.”

“Analysis of the polling data shows that active union members are actually more Republican than non-union members, even though a plurality are Democrats,” the report concluded, adding that union members are also “significantly more likely than the average non-member to hold positive views of capitalism. This is contrary to public perception, especially from the Left, of unions and union members as more friendly toward socialism and more hostile to capitalism.”

According to a September 2021 American Compass survey of 3,000 potential union members from the ages of 18 to 65, “excessive engagement in politics is the number one obstacle to a robust American labor movement.”

By a margin of 3–1, survey respondents said they would prefer a union that focused only on workplace issues over one that was also engaged in national politics.

Asked about the various activities a union may pursue, half of the survey participants said they preferred collective bargaining and providing training and benefits. Only three percent favored a focus on politics.

While union leaders claim to focus their efforts on protecting the common interests of the workers, a growing number of people are leaving unions as they see greater sums of their dues being used to push an increasingly more progressive political agenda, rather than fighting for issues that benefit them directly.

The greatest catalyst of the membership exodus was the June 27, 2018, ruling by the Supreme Court in Janus v. AFSCME (pdf) stating that nonunion government workers can no longer be forced to pay the union’s “agency fees” as a condition of working in public service.

“So many of us have been forced to pay for political speech and policy positions with which we disagree, just so we can keep our jobs,” said Mark Janus, the plaintiff in the case, after the ruling. “This is a victory for all of us. The right to say ‘no’ to a union is just as important as the right to say ‘yes.’ Finally our rights have been restored.”

Janus filed his case in Illinois in 2015 with free legal representation from the Liberty Justice Center and the National Right to Work Legal Defense Foundation.

According to Jeffrey M. Schwab, lead attorney for Liberty Justice Center, “one problem people face in the wake of the Janus ruling is that a lot of people don’t know about Janus.”

“Obviously, a lot of people think unions are valuable and that’s fine,” Schwab told The Epoch Times. “They can continue to join unions if they want. The important thing about Janus is if you don’t support what the unions do, you shouldn’t have to fund them.”

It’s All About Choice

Schwab also explained that while Janus has a provision that requires unions and public sector employers to inform employees that they are not required to join and pay dues, some unions and public employers are not following the law, so people are signing up to join unions and paying dues because they believe they have to.

When the employees find out they had the right to decline, they’re stuck in the union paying dues for the full term of the contract they signed, which is generally for a year.

“We had a lot of cases after Janus from all types of different clients with different reasons for not wanting to join a union,” Schwab explained.

“The benefit of Janus is that if you don’t want to contribute to a union that contributes to political candidates and causes, now you don’t have to,” Schwab said.

In 2020, Bloomberg Law reported that unions were struggling to fend off a “membership exodus” in the two years following the ruling.

While AFSCME added 40,000 full-time members between 2017 and 2019, another 110,000 dues-paying members left the union as a result of the Janus decision. The Service Employees International Union (SEIU) lost an additional 55,000 union members during the same period.

“It shows the importance of Janus,” Schwab said. “People are leaving unions because they were unhappy with the status of the unions.”

Bates said unions have undergone a metamorphosis since Janus. While private sector union leaders have more interest in representing their members, public sector union leaders have an obvious incentive to engage in activities that will grow the size and cost of government by promoting candidates and causes that will in turn benefit unions, she said.

“This has really changed what unions stand for and what they advocate for at the state and national level,” Bates said.

She also noted how AFSCME has been plagued by corruption in the past.

In January 2000, The New York Times exposed the corrupt activities of 35 AFSCME union officials, including the $2.2 million misappropriated by a District Council 37 official, the $51,000 stolen by a District Council 20 senior official in Washington, the $96,000 stolen by the treasurer of Local 366 in Milwaukee, and the $13,500 in union checks the treasurer of a municipal workers’ local in Elkhart, Ind., wrote for his personal benefit.

There was also the $761,000 embezzled by Thomas W. Waters, the secretary-treasurer of District Council 20 in Washington, and the $73,500 embezzled by Barbara T. Wood, the finance director for the Washington council.

The federal Office of Labor-Management Standards has recorded dozens of investigations over the years into AFSCME officials in districts across the country, most of which dealt with embezzlement and other forms of theft.