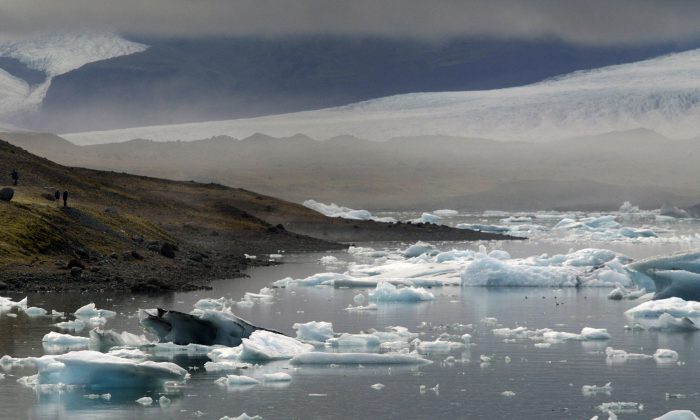 Detaching icebergs in Iceland's Vatnajokull Glacier as they move towards the sea in July 2006. Sea level has been rising since the end of the last glacial period, 15,000 years ago. (Marcel Mochet/AFP/Getty Images)
Opinion

The best answer to most of the claims by climate activists and their political allies is simply: so what?

“Climate change is real,” they say. So what? Gravity and sunrise are also real. That doesn’t mean we cause them or we would be better off without them. Climate has been changing since the origin of the atmosphere billions of years ago.

But, “manmade climate change is a fact,” they respond. So what? It is obviously warmer in urban areas than in the countryside because of manmade impacts. But the only place where carbon dioxide (CO2) increase causes a temperature increase is in computer models preprogrammed to show exactly that. All records show that temperature increase precedes CO2 increase.

All that should matter to public officials is whether our CO2 emissions are in any way dangerous. Since they are almost certainly not, the $1 billion spent every day across the world on climate finance is mostly wasted.

But, they tell us, “2014 was the hottest year on record, until 2015 surpassed even that. The last two decades include the 19 hottest years on record.”

Regardless, one would naturally expect the warmest years to be at the top of a warming record. And thank goodness we have been in a gradual warming trend since the depths of the Little Ice Age in the late 1600s.

But “observations of extreme weather events are increasing. Insurance claims are skyrocketing,” we are told.

So what? As human habitation increases in areas that were previously sparsely populated, there will naturally be more reports of extreme weather and more related insurance claims. The database of the State Climate Extremes Committee clearly shows that the incidence of state-wide extreme weather records has been decreasing in recent years.

The next alarmist claim? “Sea levels rose 7 inches in the last century!”

So what? Sea level has been rising since the end of the last glacial period, 15,000 years ago. There has been no recent acceleration, and the current rate of rise is less than one tenth that of 8,000 years ago.

As their climate change claims fail, activists change targets: “The oceans are becoming more acidic and a catastrophe awaits if this continues!”

Overall, the oceans have never been acidic (i.e., a pH less than 7). Dr. Craig Idso, founder of the Center for the Study of Carbon Dioxide and Global Change explains: “Forecasts of future pH come from unproven, theoretical postulations by models based on absorption of CO2 by the oceans. Regardless, there really is no such thing as a representative pH for the whole ocean. It varies vastly near the coast and in upwelling regions, much more than the projected increase in acidity.”

There are regions in the ocean where pH varies more in a day than the most extreme forecasts for the 21st century, yet ocean life adapts. So, once again, the best response to ocean acidification concerns is: so what?

Climate campaigners are upset that fossil fuel companies support some of the groups who question political correctness on climate change. For example, Jeff Merkley (D-Ore.) complained to the Senate recently that skeptics received at least $332,000 from Peabody Energy between 2014 and 2015.

So what? The May 27, 2016 creditor matrix associated with Peabody’s bankruptcy filings also includes entries for Ducks Unlimited, the Center for Clean Air Policy, Democratic political party organizations, and the Sierra Club. Are donations only a problem when they support groups that disagree with the climate scare?

Of particular concern to activists is funding from the Koch brothers, who, according to Merkley, gave $88 million since 1997 to groups that opposed climate alarmism.

So what? The amounts being funneled to entities which support the climate scare is enormously greater. The latest Foundation Center report (2010) shows that the California-based William and Flora Hewlett Foundation alone donated over one half billion dollars to climate change programs in 2008, over one hundred times as much as Koch’s average annual donation cited by Merkley.

All this would be humorous if it did not have such serious ramifications. In the vain hope of stopping trivial changes in climate, activists and compliant politicians are working hard to force us to switch from coal and other fossil fuels, America’s least expensive and most abundant power sources, to unreliable and expensive alternatives such as wind and solar power. The public need to ask them, “Why are you doing this? Who are you trying to please?”