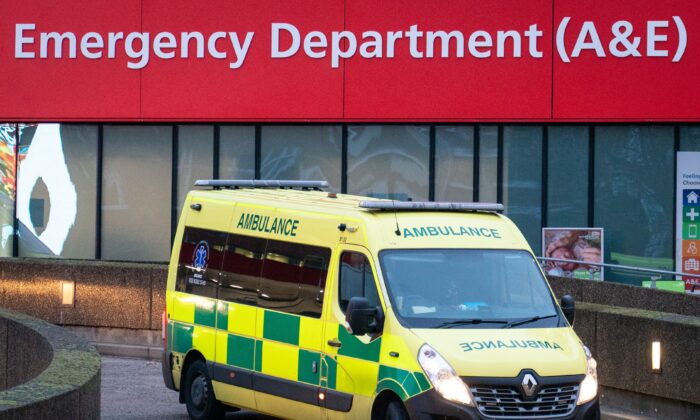 An ambulance outside an Accident and Emergency Department on Jan. 6, 2022. (Dominic Lipinski/PA Media)
UK

Excess deaths in England and Wales have risen to the highest level in three months even as the death toll from COVID-19 continues to fall, the latest UK official data shows.

According to the Office for National Statistics (ONS), 10,982 deaths were registered in England and Wales in the week ending Aug. 19, which is 18.6 percent above the average for this time of year.

During the week, excess deaths in England and Wales was 1,719, the highest for three months. It was also a significant jump from the 950 excess deaths recorded in the week before.

Deaths have been above average almost continuously since the end of March, following a period at the start of the year when no excess deaths were recorded.

The figures remain particularly high for deaths that have occurred in people’s own homes, where deaths registered in the week to Aug. 19 were 29.5 percent above average.

While total deaths were abnormally high, those related to COVID-19 have fallen.

Among the deaths recorded in that week, just 551 mentioned COVID-19 on the death certificate, down 7 percent from the previous week, according to the ONS.

Previous research by the ONS has suggested that heart disease, dementia, Alzheimer’s, cancer, and other causes have driven the large number of extra deaths in homes since the pandemic began.

These trends suggest the pandemic “appears to have had an indirect effect” on private-home deaths, the ONS said.

“This could be because of a combination of factors which may include health service disruption, people choosing to stay away from healthcare settings, or terminally ill people staying at home rather than being admitted to other settings for end-of-life care,” it said.

A more recent factor is likely to be the periods of extreme heat that affected the UK in July and early August this year, according to the ONS.

The UK government has been urged to launch an investigation into the excess deaths, which have been higher than usual over the past three months, particularly in younger age groups.

Jamie Jenkins, former head of health analysis and labour market analysis at the ONS, told The Epoch Times that he believes the larger-than-expected excess deaths, especially in some of the younger age groups, “does warrant a bit of a further look in terms of what’s happening.”

The Health Advisory and Recovery Team (HART), a group of experts who are sceptical about the policy and guidance relating to the COVID-19 pandemic, have been calling for an investigation into the excess death in the younger age groups for more than a year.

Dr. Clare Craig, a HART spokeswoman, told The Epoch Times that the number of excess deaths has been “rocketing” lately and the current trend appears to be “disproportionate compared to anything we saw earlier.”

She said there are “obviously concerns” that some deaths might be related to COVID-19 vaccines, which are known to be linked to adverse effects including myocarditis and pericarditis.