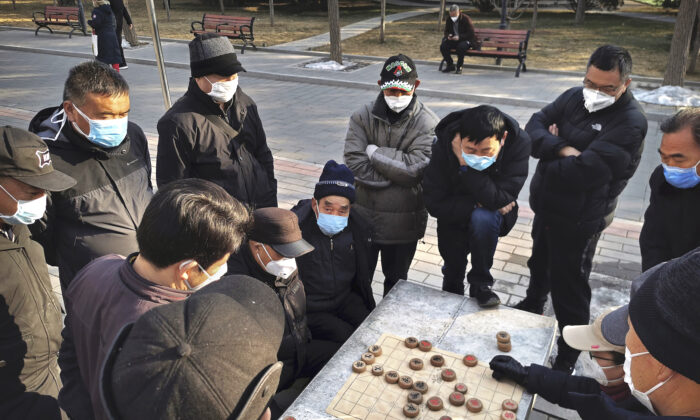 Chinese men all wear protective masks as they play mahjong at a park in Beijing, China on Jan. 31, 2020. (Kevin Frayer/Getty Images)
By Epoch Times Staff

As the coronavirus outbreak reaches a crisis point, the Chinese Communist Party (CCP) has ramped up its monitoring and censorship of the internet to delete unsanctioned posts.

“50 Days of the Wuhan Outbreak: Chinese People Are Suffering from the Death of Media” was one such article shared on WeChat, China’s most popular social media platform. It was soon deleted by CCP censors.

Below are some excerpts from the article posted on Jan. 27:

Having worked with the press as a media person for nearly 30 years, I am concerned about the media’s role in this outbreak that has ‘suddenly’ swept China.

Throughout the news media’s responses to the outbreak about the coronavirus, Jan. 20 was undoubtedly a distinct watershed moment.

Prior to Jan. 20, reports on the coronavirus mainly came from local official media in Wuhan [where the virus first broke out] and Hubei [Province, where Wuhan is the capital]. The key point of most reports could be summarized in one sentence: the virus was “mildly dangerous” and “controllable.” For instance, some experts asserted that this new virus could not be transmitted from person to person.

During that period, eight Wuhan citizens received warnings from the police for ‘starting rumors’ [about the virus] on social media. Although the first patient appeared as early as on Dec. 8, 2019, apparently over the following 40 days, the news media did nothing more than to pacify their audience.

The atmosphere was peaceful even in Wuhan, let alone in other parts of China.

But after Jan. 20, the situation took a drastic turn.

In a span of 3 to 4 days, the situation escalated to large-scale infections. Wuhan announced a lockdown, sought assistance from many major provinces and cities across the country, and initiated a first-level response as a major public health emergency.

Since Jan. 20, the news media’s engagement has entered what I call the second phase. The salient features of this stage, to use words commonly used by the government: the main battlefield of public opinion shifted beyond Wuhan and Hubei Province, and the voices of local official media were submerged by a series of stories from the more powerful national media outlets.

As I expected, however, the other key point of media reports at this stage was to show determination and eulogize good people and good deeds. In short, since Jan. 20, the main tone of Chinese media has changed from “pacifying” to “encouraging” and “moving” its audience.

The media responded differently before and after Jan. 20, but one thing remains in common: they basically did not do what qualified news media should have done.

The afternoon before Chinese New Year’s Eve (Jan. 24), Wang Heyan, a reporter for Caixin, a Chinese privately-owned media, stated in a post on Wechat that he and his colleagues managed to contact several doctors at a Wuhan hospital in order to verify infections among medical staff. However, they were informed that, by order of China’s CDC (Center for Disease Control and Prevention), medical personnel are not allowed to talk to media about the outbreak—not even with the reporter’s promise of anonymity.

That same afternoon, another reporter disclosed that he passed the Huanan Seafood Market, the supposed source of the virus, to take a picture. Four security guards immediately arrived and demanded that he delete the photos. Some even grabbed his phone and said, “Yesterday a Japanese reporter came to take pictures but was arrested and sent to the police station.

On the same day, a senior journalist from a Hubei newspaper was also punished for disclosing information on WeChat.

The price of this kind of silencing policy was that more and more social conflicts would accumulate and finally break out in a major crisis such as this. More seriously, this policy not only failed to stabilize society but instead stoked more panic. When the truth was finally unveiled and everything broke out, irreversibly painful consequences have occurred.

The Death of Truthful News

Almost two years ago around this time of year, I published an article titled, ‘The Real News Is Dying, But What’s More Frightening Is That Nobody Cares.’ I have lamented the extent to which today’s news media has declined in their ability to report on important events of major public interest.

I wrote with strong anxiety at the time: “With the kind of public sentiment today, if we really have to face something like SARS [outbreak in 2002 to 2003] again, the consequences would simply be too horrible to contemplate.”

Unfortunately, it happened in less than two years.

My mentality is still the same as it was two years ago. I would not accuse anyone of dereliction of duty. I have no ambition or aspiration to provide a solution for the current situation. However, I believe that when we see danger, we should always point it out. Only when more people pay attention to it and participate in discussions about it, can there be a glimmer of hope.

That article had received more than 1 million views on WeChat, underscoring readers’ concerns about this ongoing issue. This is at least a comfort to me because it means there is still hope.