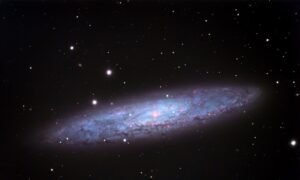 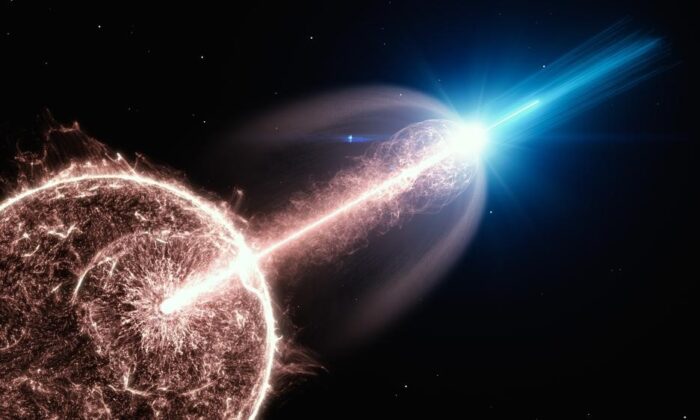 Artist’s impression of a relativistic jet of a gamma-ray burst (GRB) breaking out of a collapsing star and emitting very-high-energy photons. (DESY, Science Communication Lab)
Space

Scientists have obtained the best view so far of the most powerful type of cosmic explosion, which happened this time in our cosmological “backyard.”

Using the High Energy Stereoscopic System (H.E.S.S.), the research team recorded the most energetic radiation and longest gamma-ray afterglow of a gamma-ray burst (GRB) ever observed. The results challenged the established theory of GRBs.

“Gamma-ray bursts are bright X-ray and gamma-ray flashes observed in the sky, emitted by distant extragalactic sources,” said DESY scientist Sylvia Zhu, one of the authors of the paper, in a statement.

“They are the biggest explosions in the universe and associated with the collapse of a rapidly rotating massive star to a black hole,” she added. “A fraction of the liberated gravitational energy feeds the production of an ultrarelativistic blast wave. Their emission is divided into two distinct phases: an initial chaotic prompt phase lasting tens of seconds, followed by a long-lasting, smoothly fading afterglow phase.”

This GRB was first recorded on Aug. 29, 2019, when the Fermi and Swift space telescopes detected a burst of gamma rays from the direction of the constellation Eridanus, according to the statement.

“We were really sitting in the front row when this gamma-ray burst happened,” said co-author Andrew Taylor from DESY in the statement.

The research team immediately observed the source when it became visible to the H.E.S.S. telescopes.

“We could observe the afterglow for several days and to unprecedented gamma-ray energies,” Taylor added.

The rather short distance to this GRB allowed for detailed observations of the afterglow’s spectrum in the very-high-energy range. The team was able to follow the afterglow for up to three days after the explosion.

“We could determine GRB 190829A’s spectrum up to an energy of 3.3 tera-electronvolts, that’s about a trillion times as energetic as the photons of visible light,” co-author Edna Ruiz-Velasco from the Max Planck Institute for Nuclear Physics in Heidelberg said in the statement. “This is what’s so exceptional about this gamma-ray burst—it happened in our cosmic backyard where the very-high-energy photons were not absorbed in collisions with background light on their way to Earth, as it happens over larger distances in the cosmos.”

Established GRB theories generally agree that the X-ray emission originates from the synchrotron emission of ultra-relativistic electrons in the strong magnetic fields of the GRB.

However, this mechanism is very unlikely to directly produce the observed very-high-energy gamma rays, even for the most powerful explosions, according to the statement. This is due to a “burn-off limit” that is determined by the balance of acceleration and cooling of particles within the source.

However, the observations of GRB 190829A’s afterglow now show that both the X-rays and gamma rays faded in sync, and the gamma-ray spectrum matched an extrapolation of the X-ray spectrum. The statement explained that this challenges the synchrotron self-Compton origin of the very-high-energy gamma-ray emission.

“Our observations revealed curious similarities between the X-ray and very-high-energy gamma-ray emission of the burst’s afterglow,” Zhu added.

Therefore, the new results strongly indicate that the X-rays and very-high-energy gamma rays in this afterglow event were created by the same mechanism, according to the statement.

“It is rather unexpected to observe such remarkably similar spectral and temporal characteristics in the X-ray and very-high-energy gamma-ray energy bands, if the emission in these two energy ranges had different origins,” co-author Dmitry Khangulyan from Rikkyo University in Tokyo said in the statement.

The findings suggest that further study of very-high-energy GRB afterglow emission is needed, according to the statement. Earlier detections of GRBs with very high energies occurred much farther away in the universe; their afterglow could only be observed for a few hours, and not to energies over 1 tera-electronvolts.

“Looking to the future, the prospects for the detection of gamma-ray bursts by next-generation instruments like the Cherenkov Telescope Array that is currently being built in the Chilean Andes and on the Canary Island of La Palma look promising,” H.E.S.S. spokesperson Stefan Wagner from Landessternwarte Heidelberg said in the statement. “The general abundance of gamma-ray bursts leads us to expect that regular detections in the very-high-energy band will become rather common, helping us to fully understand their physics.”

The new research was reported in a paper in the journal Science.