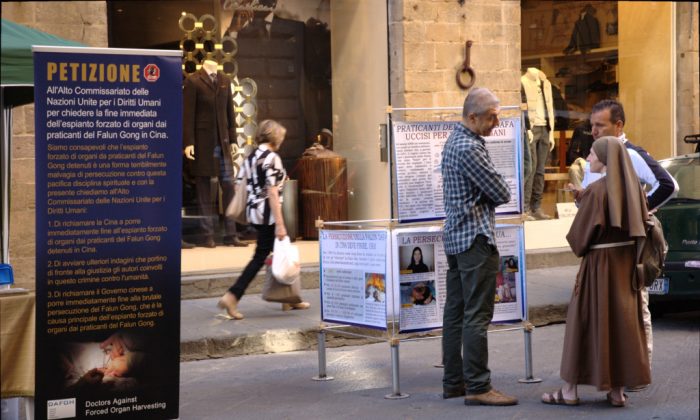 Panorama, an Italian weekly news magazine, published an article exposing China’s barbaric practice of forced organ harvesting, that is, procuring transplant organs from living, unconsenting, prisoners of conscience, and killing them in the process.

The August 24 article titled “China: When the State Wants Your Organs” triggered a typical wolf-warrior-like response from the Chinese Embassy in Italy. However, Panorama did not back down. Instead, they published a second article reiterating the solidity of their sources and the groundlessness of the Chinese embassy’s accusations.

In response to the Chinese embassy’s statement, Panorama immediately published another article, “China has violated the medical ethics rules on organ transplants.” It said, “It should be remembered that China spreads false news 24/7 about the prison camps where Uyghurs, Falun Gong members, thousands of political prisoners are being held; and hid the real facts of the pandemic from the beginning.”

“The case of illegal organ transplants taken from prisoners in China is a topic that has been discussed for many years and about which the most important international authorities have repeatedly asked the Chinese government for clarity.”

The article noted that the Chinese government violated two core values of medical ethics. First, it violated the dead donor rule, which prohibits the removal of an essential organ from a living person.

The authors quote a peer-reviewed study published in the world’s leading medical journal the American Journal of Transplantation. One of the authors is Professor Jacob Lavee, a medical advisor on risk management for Sheba Medical Center and member of the ethics board of the International Society for Heart and Lung Transplantation. He established and managed Sheba’s heart transplant unit and served as president of the Israeli Transplant Society. The peer-reviewed study found, from Chinese journal articles, 71 cases showing the organs were harvested prior to the donor’s death.

According to the same study, the second ethics rule China violated is the ban on doctors’ participation in the execution of prisoners.

“These are our sources, and these are the evidence on which the international community agrees,” the Panorama article said, “The Chinese embassy in Italy simply does its job—denouncing all these as false without giving any evidence to support its claim.”

VOC: Beijing Desperate to Deflect Attention from its Rights Abuses

In an email to The Epoch Times, Michal Harmata, spokesperson for the Victims of Communism Memorial Foundation (VOC), refuted the Chinese embassy’s accusation that “the VOC was established by U.S. intelligence agency to demonize China.”

Harmata wrote, “The false accusation and obfuscations by the Chinese Embassy in Italy are not the first such claims made by the CCP, nor will they be the last. In August of this year, The cybersecurity firm Mandiant uncovered a web of disinformation websites, social media accounts, and forged documents aimed at discrediting VOC and Dr. Adrian Zenz. Previously, Dr. Adrian Zenz was the target of Chinese lawsuits after his research into the CCP’s forced labor regime led to the United States banning cotton imports from Xinjiang.”

“The ongoing efforts by the Chinese Communist Party to discredit VOC reflect an increasing desperation by Beijing to deflect attention from its human rights abuses. As VOC’s China Studies team have documented, the CCP is guilty of brutal crimes—and the free world is starting to push back.”

Harmata mentioned VOC’s Xinjiang Police Files, a groundbreaking analysis that shows the direct involvement of the top Chinese leaders in the mass internment campaign against the Uyghurs. The analysis was done by Dr. Zenz, VOC’s Director of China Studies, and vetted by a consortium of investigative journalists from around the globe.

The Xinjiang Police Files were cited by the United Nations High Commission for Human Rights as evidence of China’s “serious human rights violations” in Xinjiang.

A body of independent UN experts followed up the report and called for the Human Rights Council to convene a special session on China.

Harmata said, “VOC will not be silenced by the Chinese Communist Parties’ campaign of disinformation and harassment. VOC is a nonpartisan, educational, research, and human rights nonprofit organization authorized in 1993 by a unanimous Act of Congress, and will continue to fight for those that the Chinese Communist Party so fervently wishes to subjugate, silence, and oppress.”

Sarah Cook, Research Director for China, Hong Kong, and Taiwan at Freedom House, told The Epoch Times that “Panorama’s response is an excellent example of journalists’ protecting local press freedom and serves to expose and rebuff the Chinese government’s pressure, as well as to remind readers of the credible facts on which the original report was based.”

A recent Freedom House report looked at Beijing’s media influence in 30 countries around the world, including Italy, and the local responses to it. Cook said, “We found that the Chinese Communist Party’s campaign to affect news coverage globally has expanded since 2019 and that the tactics used are becoming more sophisticated and aggressive.”

“We also found that journalists and others in democracies are pushing back, standing up for fact-based reporting, including on topics like the persecution of Uyghurs and Falun Gong practitioners in China.

“This incident in Italy perfectly captures those dynamics. It is part of a larger pattern of Chinese embassy representatives reaching out to local news outlets that publish reporting the CCP doesn’t like, questioning its credibility, and implicitly or explicitly asking them to reconsider its publication.”

Cook also gave examples of Chinese influence that was successful, like an incident in Kuwait when an interview with Taiwan’s foreign minister that the Arab Times removed from its website under pressure.

“But often, the reaction from local journalists is indignation and rejection of the embassy’s request, an important way of protecting local press freedom.” Cook said.