Examining the Entrails of the Singapore Summit 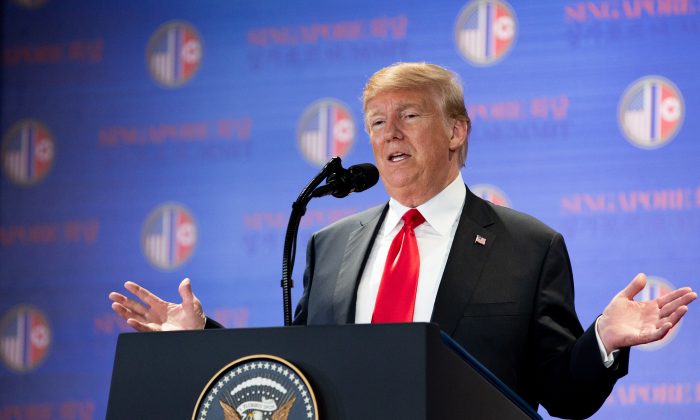 The June 12–13 Singapore Summit is over. Now the partisan analysis begins. Is the “glass” half full? A quarter full? Contains just a few drops? Is there a glass at all?

Certainly, there has been as much bloviating bombast as a hyperactive, 5,000-individual media contingent (complemented by thousands of critics/commentators/analysts around the globe) could possibly produce.

The essential problem is that they are attempting to make a 12-course dinner from a few selected crumbs. Reporters have been limited to photo-ops, brief videos, and attempts to read “body language.”

There is a reason for this: An essential element of negotiations is that one sees only the iceberg’s tip in comparison to what is actually in process. As a corollary, those who talk, don’t know; those who know, don’t talk.

We have no idea what President Donald Trump and North Korean leader Kim Jong Un discussed in their 30-minute tête-à-tête before team meetings began. Information on the full team meetings is largely unknown.

We do not know the contents of multiple meetings between national leaders in the summit runup: for instance, Kim’s two trips to Beijing; his meetings with South Korean President Moon Jae-in; Japanese Prime Minister Shinzo Abe’s meetings with Trump; U.S. Secretary State Mike Pompeo’s meetings with Kim; or any of the multiple pre-summit sessions.

So what do we have from the summit?

As the 400-word communique has been much-parsed, the following are the operative points, minus the persiflage:

And both sides commit “to implement the stipulations in this joint statement fully and expeditiously.” Follow-on negotiations led by Pompeo “at the earliest possible date” will “implement the outcomes of the … summit.”

With over-the-top rhetoric, Trump has announced the end of the nuclear threat to the United States, praised Kim (in effect given him a tabula rasa and stared past Pyongyang’s execrable human rights record), and invited Kim to the White House.

Critics are urinating (not just raining) on Trump’s parade.

They have belabored the absence of “verifiable and irreversible” in describing denuclearization. (Pompeo testily termed the question “ludicrous,” emphasizing that such commitments were subsumed under “complete.”)

They have questioned the indefinite suspension of joint military maneuvers with the South. However, one can easily hypothesize it is the “quid” for North Korea’s suspension of nuclear and missile testing.

An enormous amount remains to be done. We’ve put the flagpole atop the skyscraper and now must complete the rest of the building.

What can we expect? History says Kim will escape and evade real compliance with our objectives. On the other hand, prior to the INF Treaty, the Soviets had never adhered to an agreement with the United States.

At best, we have taken the first step in a very, very extended process of painstaking tit-for-tat negotiation that draws down Pyongyang’s nuclear, missile, and chemical capabilities. For example, Kim may return the USS Pueblo held now for 50 years. Or there may be some creative mechanism with multiple countries (China, South Korea, Switzerland, etc.) providing overwatch of facilities and weapons depots.

And it also depends on Kim’s continued primacy in Pyongyang. Some of his entourage may be less interested in playing nice, preferring confrontation.

Essentially, the Singapore summit was just the end of the beginning, and what was started there may conclude well—or badly.