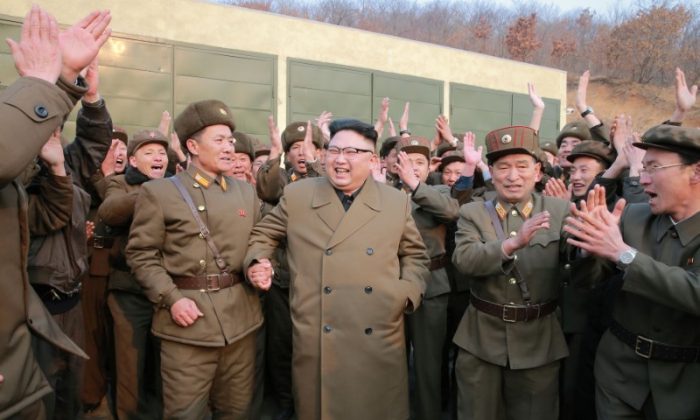 North Korean leader Kim Jong Un watched the ground jet test of a Korean-style high-thrust engine newly developed by the Academy of the National Defence Science in this undated picture provided by KCNA in Pyongyang on March 19, 2017. KCNA/via Reuters
The Dead End of Communism

Brandishing nuclear weapons and ballistic missiles, North Korea has topped news headlines for the last decade as it has menaced its more prosperous neighbors.

Unlike the Soviet Union, which collapsed and split into over a dozen non-communist nations, or China, whose leaders still follow the rule and ideology of the Communist Party but allow interaction with the outside world, North Korea has remained an isolated totalitarian state.

Some have argued that North Korea isn’t exactly communist, as the country removed all references to communism and Karl Marx from its constitution in the 2000s, and it follows a program of extreme nationalism and implicit dynastic succession. In lieu of Marxism, the official ideology is the so-called “juche,” a Chinese-derived name that is usually translated as “self-reliance.”

But in terms of its leadership, society, and strictly controlled command economy, North Korea resembles, and surpasses, the archetypal authoritarian socialist regimes that existed during the Cold War. Moreover, the state owes its ideological foundations and very existence to communism and communist powers.

In the 1940s, the Soviet Union sent specialists to help Kim Il Sung consolidate power and establish a communist regime. They also trained and sent thousands of agents to destabilize U.S.-led efforts to establish a democracy in South Korea. To gain power, Kim used the same formula as nearly every budding communist dictator: purging “counter-revolutionaries.” In North Korea, this was called the Concentrated Guidance Campaign.

Some 800,000 North Koreans fled to the south, and the state labeled the remaining family members of individuals who fled to South Korea as “counter-revolutionaries.”

We have executed all Protestant and Catholic church cadre members, and all other vicious religious elements have been sent to concentration camps.
— Kim Il Sung, North Korean communist dictator

In a style almost exactly mimicking that of Josef Stalin, Kim erected a cult of personality around himself, purging the Korean Workers’ Party of all dissent and banishing designated class enemies into a network of gulags—the infamous kwanliso.

Little scholarship can be conducted on North Korea, but the Kim regime is believed to have murdered between 710,000 and 3.5 million people, according to researchers, while experts estimate that some 150,000 to 200,000 North Koreans are currently imprisoned in a system of labor camps—of those, 50,000 to 70,000 are Christians. Hundreds of thousands of North Koreans were forced to flee the country, with most going to China.

Kim targeted Korean Christians in particular. “We have executed all Protestant and Catholic church cadre members and all other vicious religious elements have been sent to concentration camps,” he once proclaimed in 1962. Their beliefs got in the way of the regime’s propaganda campaign effectively proclaiming Kim as being a living god. In practice, North Korea’s juche ideology promotes bizarre forms of ethnic nationalism, describing the Kim family as saviors of the “Korean race.”

Under Kim, Soviet-style plans were initially implemented, including the seizure of private property as well as of national industries. By 1950, Kim was obsessed with unifying North and South Korea before he received substantial help from Soviet advisers, who helped draw up invasion plans and provided military equipment. Later, Chinese Communist Party leader Mao Zedong deployed 300,000 troops to North Korea during the Korean War.

Officially, North Korea says it isn’t communist, but it behaves as if it is. The country is an anomaly—it could be more accurately described as a communist-inspired monarchy, as some experts have said. The communist Worker’s Party is the founding and ruling political party of North Korea and uses an emblem that’s an adaptation of the communist hammer and sickle, along with a Korean writing brush. In 2012, it claimed that juche is now “the only guiding idea of the Party,” as juche can be used to keep the Kim family’s stranglehold on power.

“North Korea might be the only place on the face of the earth where these basic principles, once developed by Joseph Stalin around 1930, are still implemented consistently. Admittedly, the ‘universal truth of Marxism-Leninism’ has been replaced by the same truth of juche, and many elements of the system have been redesigned. Nonetheless, this is still the closest approximation to the once common model, a living fossil of a sort.”

The promotion of communism and Marxism-Leninism seemingly started to disappear after Kim Il Sung’s death in 1994. By 2009, references to the word “communism” had been dropped from North Korea’s constitution while pictures of Marx and Lenin were removed from public areas. Kim Il Sung and his son, Kim Jong Il, were frequently displayed next to them, while both Kims are credited with writing a huge number of books on Marxist theory.

When the Soviet Union collapsed, the juche ideology became the primary doctrine, as “the Kim dynasty is much more than just an authoritarian political regime. It holds itself to be the ultimate source of power, virtue, spiritual wisdom, and truth for its citizens,” writes DailyNK, a South Korean online newspaper.

Another deviation from typical Marxist states is the songbun system, a kind of caste system that was adopted by the communist Workers’ Party in the late 1950s. It amounted to being a massive purge of North Korea’s society that created five social classes.

The songbun system, which came into full power around 1967, “divides the population into groups, according to the actions and status of their paternal ancestor (and themselves, depending on their age) during the Japanese colonial period and the Korean War,” according to NK News. In theory, there are no classes in communist societies—but granulated class hierarchies have developed in both the Soviet Union and China. The Chinese Communist Party, for example, has a fantastically complex hierarchy, in which top-level communists enjoy the greatest privileges.

The Organisation Guidance Department of the Communist Party controlled the songbun system. Many experts believe it was the true center of power in the 1960s, when North Korean authorities began classifying every citizen as an enemy or a supporter.

But it still retains hallmarks typical of communist states, including the imagery and obsession with ideology. Propaganda pieces of the Kim family are painted in a communist “socialist realist” style. Blood red banners and interior design are commonplace. Kim Jong Un, grandson of Kim Il Sung and current leader, has sported a Mao-style suit, while the party recently granted him the title of chairman, akin to Mao. He’s also the chairman of the Central Committee of the Workers’ Party and the Central Military Commissions, which are communist in origin.

North Korea’s apparatus of repression is decidedly Stalinist in nature.

Every newspaper, book, and magazine is authorized by the government to promote the Kim family, and North Koreans are forbidden from listening to foreign broadcasters or reading foreign publications.

In North Korea’s gulag system, in which an estimated 150,000 to 200,000 people are currently held, prisoners are subjected to forced labor, starvation, forced abortions, mass executions, torture, beatings, and more. Children born to parents in the camps remain there for the rest of their lives, as part of the the lowest caste in the songbun system. In this way, North Korea has surpassed even the Soviet Union.

“Even now as I speak here today, there are still babies being born in the camps, public executions—like that of my mother and brother—happening in the camp, and dying from beatings and starvations,” camp survivor Shin Dong-Hyuk said in 2014, after the release of a report commissioned by human rights group Human Liberty on the alleged genocide.