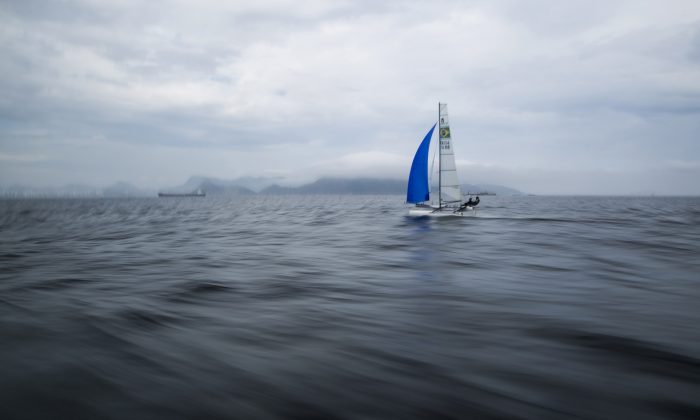 Brazilian athletes Samuel Albrecht and Isabel Swan practice in Guanabara Bay in Rio de Janeiro, Brazil, on Nov. 3, 2015. Since August, The Associated Press has expanded its testing to include offshore sampling sites inside sailing circuits in the bay and in the middle of the Rodrigo de Freitas Lagoon where rowing and canoeing lanes were located during recent test events. (AP Photo/Felipe Dana)
International

Ex-World Sailing CEO: ‘I was fired for trying to move Rio event’

RIO DE JANEIRO—The former CEO of World Sailing says he was fired for pushing to get rid of polluted Guanabara Bay as the sailing venue of the Olympics in Rio de Janeiro.

Peter Sowrey tried to change the venue, or at least have a “B plan” but says “I was told to gag myself on the subject.”

Andy Hunt took over just two weeks ago as the new CEO, and sailing is still scheduled to begin in August in the sewage-filled bay.

In interviews with The Associated Press, Sowrey and Hunt said the bay—overlooked by the famous Christ the Redeemer monument and Sugarloaf Mountain behind it—may give sailing the kind of television coverage it seldom enjoys.

It could also bring unwanted attention if sailors fall ill, or if floating rubbish—plastic bags to door frames to animal carcasses—fouls rudders and costs someone an Olympic gold medal.

Sowrey proposed moving the event to Buzios, a coastal resort about 160 kilometers (100 miles) from Rio that has been host to large sailing events. Of course, it’s too late now for that change.

Sowrey, who left in December after only five months on the job, came to the governing body from the consulting company Accenture. He acknowledged he had little experience dealing with the politics that drive international sports federations. But he brought business acumen.

“The board felt I was way too aggressive,” Sowrey said. “They basically voted me out. I didn’t resign. The board finally told me to leave.”

Sowrey said looking at Guanabara Bay on “fact-based, data-driven models we would never consider sailing in that quality of water.”

Independent testing of Guanabara Bay conducted by the AP over the last year shows disease-causing viruses linked to human sewage at levels thousands of times above what would be considered alarming in the U.S. or Europe. The tests include the venue for sailing, but also Rio’s Olympic venues for rowing, canoeing, open-water swimming and triathlon.

About 1,600 athletes will compete in these venues during the Olympics, which open on Aug. 5, and hundreds more during the subsequent Paralympics.

Experts say athletes will be competing in the viral equivalent of raw sewage with exposure to dangerous health risks almost certain. Many sailors have described the conditions as “sailing in a toilet” or an “open sewer.”

Viruses like those in Guanabara Bay can cause stomach and respiratory ailments that could knock an athlete out of the Olympics.

When he first learned of the AP analysis, Sowrey supported the same kind of independent viral testing. But he was nudged to support the position adopted by the International Olympic Committee, the World Health Organization and local organizers; that the bacteria-only testing was sufficient.

“I was just stepping on toes,” Sowrey said.

Like many of the 35 federations that participate in the Summer and Winter Olympics, World Sailing gets much of its income from the IOC. Sowrey and Hunt both said more than half of World Sailing’s annual revenue was from that source.

World Sailing’s executive board, which Sowrey said dismissed him, has two non-voting members—King Harald V of Norway and Constantine, the former king of Greece—and seven voting members. Some are former Olympians or former heads of national sailing federations.

Sowrey proposed Buzios as a replacement for Guanabara and showed the AP a 20-page dossier detailing the plans.

“I did a plan with Buzios and tried to push it through,” said Sowrey, who also lives part-time in the town. “I couldn’t win that battle, not internally at ISAF (World Sailing) and I couldn’t win it with the organizers. I was perplexed why there was no backup sailing plan. It’s only sailing after all, it’s not curing cancer.”

Buzios is no longer an option and Hunt knows the looming risks.

“There’ll be huge interest in how the (Olympic) regatta goes, and the problems that take place,” Hunt told the AP.

Hunt has been weaned on sports politics. He was the CEO of the British Olympic Association, and the BOA delegation head for the 2010 Vancouver Winter Games, and the 2012 London Olympics.

“It (Guanabara) is not ideal,” Hunt said. “For one moment I’m not saying it’s ideal, but I do think there’s a huge amount of effort and attention going into this to ensure the safety of the athletes.”

His main worry is the floating trash, which will be policed during the games by a dozen rubbish collection boats, barriers used to block fetid streams that feed the bay, and helicopters to spot flows of detritus.

A sewer pipe to keep raw sewage from reaching the Marina da Gloria, the launching point during the Olympics, is supposed to be ready by late March but is at least three months behind schedule.

Rio treats only about half of its raw sewage, so bacteria and viruses in the bay are long-term problems without short-term fixes.

“I think it’s hard to say there’s a lot more that could be done,” Hunt said. “If there were limitless resources, maybe there’s more that might be done, but it has to be realistic.”

Hunt noted the bay was the venue for the 2007 Pan American Games, and Rio has held two Olympic sailing test events in the last two years. Hunt described these as “successful,” although many sailors complained about the stench around the marina, and teams took unusual precautions to avoid unnecessary contact with the water.

“I’m completely aware of the possibility and the challenge of how this (Olympic sailing) might get portrayed,” Hunt said. “The ultimate test—if we have delivered a great regatta—will be the response from the sailors.”