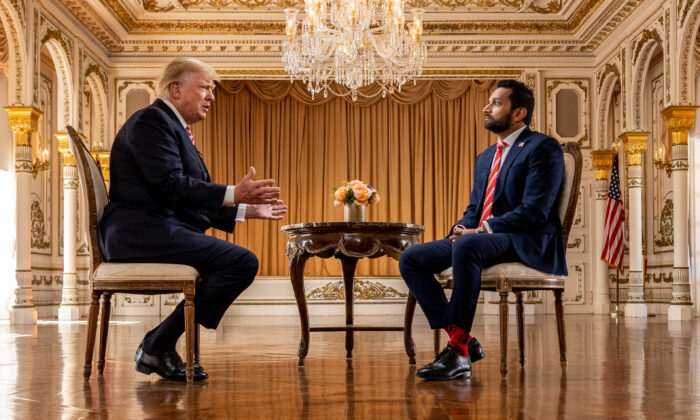 Former White House Aide: Trump’s Declassified Documents Had to Do With ‘Russiagate’

A former top Trump administration official said he thinks the FBI may have taken documents relating to the Russia–Trump collusion investigation during the raid on former President Donald Trump’s Florida home earlier this month.

Former Pentagon chief of staff Kash Patel said in a recent interview that documents that were stored at Mar-a-Lago and marked as classified were declassified when Trump left office in January 2021. He says federal officials will have a difficult time proving that those documents weren’t declassified.

“The bottom line was he said this information has to get out to the American public,” Patel told The Wall Street Journal in an interview published on Aug. 21. Patel said he didn’t know exactly what was in the boxes that FBI agents took from Trump’s home.

“It had to do with Russiagate. It had to do with the Hillary email scandal. It had to do with a whole lot of other stuff. And [Trump] said, ‘This is all declassified,’” Patel said, challenging a central claim made by the Justice Department (DOJ) that urgent action had to be taken because sensitive material was at risk.

So far, neither the DOJ nor the FBI has offered a public explanation about why the FBI agents searched a former president’s home or what they were looking for. DOJ and FBI officials didn’t respond by press time to a request by The Epoch Times for comment.

A warrant and property receipt that were unsealed more than a week ago by U.S. Magistrate Judge Bruce Reinhart show that agents took 11 boxes of allegedly classified documents, although it isn’t clear what those documents are. The warrant indicates that Trump is being probed for possible Espionage Act violations and obstruction of justice.

Republicans, Trump, and some media outlets have called for the DOJ’s affidavit—a legal document that would explain why a search warrant was sought—to be released. During a hearing last week, Reinhart ordered the DOJ to submit the affidavit with proposed redactions, which he will review before considering the release of the document to the public.

Trump posted on Truth Social, his social media platform, on Aug. 18 that he had declassified a range of documents relating to the FBI’s Crossfire Hurricane investigation. At the same time, Trump and Patel have said that the former president had a standing declassification order.

“The president is the ultimate classification authority, so if he says it or writes it, it’s declassified,” Patel, who hosts “Kash’s Corner” for EpochTV, told the WSJ.

A day before Trump left office, on Jan. 19, 2021, he issued a memo declassifying Crossfire Hurricane materials, which haven’t been made public. The former president highlighted an archived version of the memo on Truth Social last week.

“I determined that the materials in [a Crossfire Hurricane] binder should be declassified to the maximum extent possible. In response, and as part of the iterative process of the declassification review, under a cover letter dated January 17, 2021, the Federal Bureau of Investigation noted its continuing objection to any further declassification of the materials in the binder,” Trump wrote in January 2021.

The former president also said, “I hereby declassify the remaining materials in the binder. This is my final determination under the declassification review and I have directed the Attorney General to implement the redactions proposed in the FBI’s January 17 submission and return to the White House an appropriately redacted copy.”

While the Crossfire Hurricane investigation was begun in July 2016 to investigate claims of Russian interference in the election, special counsel Robert Mueller years later concluded that the investigation found no evidence showing Trump or his campaign coordinated with Moscow to sway the election.

The Crossfire Hurricane probe was based, in part, on a series of notes and memos concocted by former British intelligence officer Christopher Steele—known collectively as the “Steele dossier”—while he was performing opposition research for a third party on behalf of the Hillary Clinton presidential campaign and Democrats. A number of allegations in his dossier have since been discredited by the FBI and other groups.

Sen. Ted Cruz (R-Texas) has said the FBI raid on Trump’s Mar-a-Lago resort was a “fishing expedition” for the House Jan. 6 committee.

In remarks on his podcast on Aug. 17, Cruz said that the bureau was looking for documents related to the Capitol breach on Jan. 6, 2021. He didn’t provide any specific evidence for the statement.

“What is really distressing now looking at the warrant and what they were searching for, this was a fishing expedition,” Cruz said on his podcast “Verdict with Ted Cruz.”

“I think it had little to nothing to do with classified documents, what this was about was January 6. What this was about was the FBI and [the Department of Justice] wanting to send in a team to say ‘let’s grab every piece of paper we can find and maybe we’ll get something incriminating,'” he added.

“It’s not new for law enforcement to try to find a hook.”