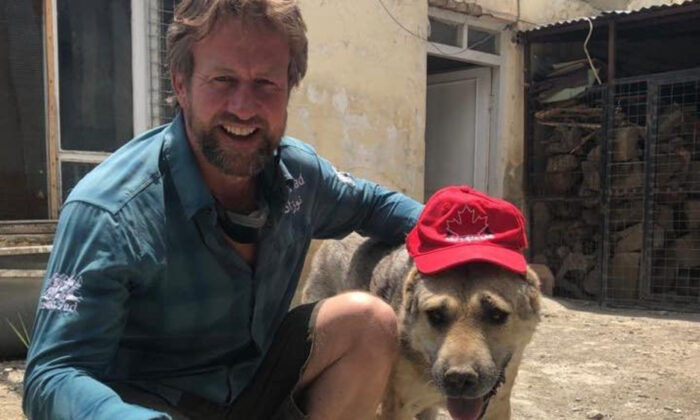 A former British marine who evacuated 163 cats and dogs out of Kabul, Afghanistan, two weeks ago is exultant after his staff and their families made it across the Afghan land border on Sept. 11.

Paul Farthing, an ex-Marine who goes by the name Pen Farthing, arrived in London from Afghanistan on Aug. 29 with 94 dogs and 69 cats from his shelter on a privately-chartered plane after waging a media battle with the British Ministry of Defence to get his flight cleared.

But “Operation Ark” was only a partial success, as his staff had to be left behind due to last-minute changes in paperwork rules.

In a Facebook livestream on the morning of Sept. 11, an elated Farthing announced that all 67 of his staff and family members had successfully made it to the Pakistani capital of Islamabad.

“The staff are out!” Farthing said, after cracking open a can of beer he’d been saving. “We’ve got them out of Afghanistan!”

Farthing confirmed that the group was alive and well and that they were handed to the British High Commission and are waiting to be processed so they can travel to the UK.

“They’re safe. … And you’ve got to see their smiles. I haven’t seen them smile in a long, long time. And I’m trying to hold it back now. I just cannot believe, I just can’t believe they’re out,” he said.

“Pleased that Nowzad’s Afghan staff, who were called for evacuation, successfully crossed the border into Pakistan today,” Raab wrote, referring to the name of Farthing’s animal charity.

“Our @ukinpakistan staff are assisting them and we look forward to welcoming them to the UK in the coming days.”

Farthing said volunteers of the Nowzad Crisis Response Team—mostly from the UK with a few from the United States—worked for 36 hours straight to get his staff safely across the border.

Farthing’s “Operation Ark” had previously sparked controversy, with many arguing that animals shouldn’t be prioritized over people, but he insisted that he had brought the animals into the airport on his own and that his evacuation didn’t occupy any public resources.

The operation also garnered a lot of support. Donations poured in, as did requests to adopt the animals, many of which belong or belonged to British service members.

Farthing said he was blown away by “the love, the compassion, the generosity” that people have shown.

Apart from the cost of getting the team and the animals out of Afghanistan, Farthing said the donations will also go toward his staff’s resettlement costs to lighten the burden on British taxpayers.