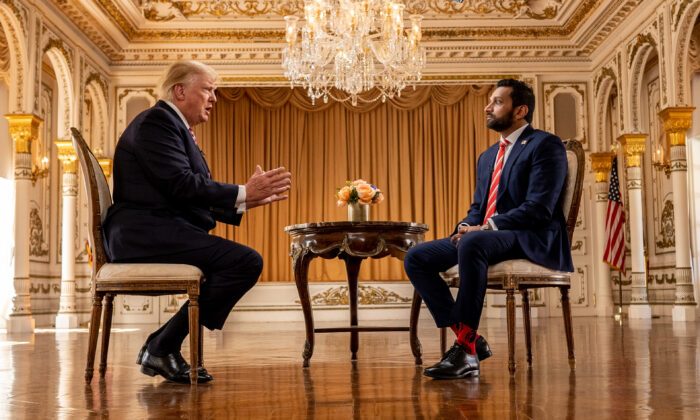 Former Trump administration official Kash Patel said that the Justice Department did not redact his name in its Mar-a-Lago affidavit for political purposes and is trying to “silence” him.

Last week, a U.S. magistrate judge ordered the release of the Department of Justice (DOJ) affidavit that was used to obtain an FBI search warrant of former President Donald Trump’s Mar-a-Lago. Much of the document and names were redacted, but Patel’s was left unredacted.

Reacting to the DOJ’s decision, Patel told Just The News that the agency “intentionally decided to politicize this affidavit for many reasons.”

“But one, which I wasn’t even expecting them to do was put my name out there, it added absolutely no value and violated every procedure at the Department of Justice in relation to protecting parties and people’s names,” he said in a recent interview.

It’s not clear why the DOJ chose not to keep Patel’s name covered up. The only other person identified by name is longtime Rep. Carolyn Maloney (D-N.Y.), the head of the House Oversight Committee who was told by the National Archives about materials that were obtained earlier this year from Mar-a-Lago. The Epoch Times has contacted the agency for comment.

That was done “for a political effect, because they wanted to try to silence me and President Trump and everybody else, and get the mainstream media to threaten me, which it has done,” said Patel, a former National Security Council and Pentagon official.

Earlier this month, DOJ officials argued against releasing the affidavit and claimed that doing so would protect the integrity of their investigation while saying it would also prevent witnesses from coming forward.

The affidavit, which redacted the reasons for the redactions, revealed few new details about what prompted the raid on Aug. 8. It also did not elaborate on what materials were taken and why it was necessary for dozens of agents to search a former president’s home.

Both Trump and Patel said that the former president had a standing order to declassify documents that left the Oval Office and went to Mar-a-Lago. And Trump has pointed to a Jan. 19, 2021, executive order that declassified some materials relating to the FBI Crossfire Hurricane investigation.