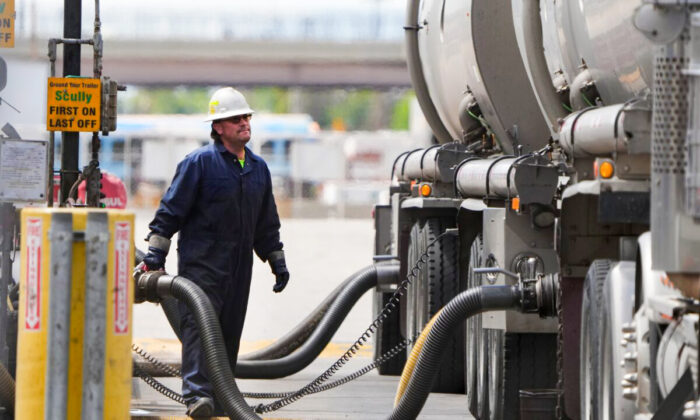 A driver unloads raw crude oil from his tanker to process into gas at Marathon Refinery in Salt Lake City, Utah, on May 24, 2022. (George Frey/Getty Images)
Economy

Tom Ozimek
Reporter
Tom Ozimek has a broad background in journalism, deposit insurance, marketing and communications, and adult education. The best writing advice he's ever heard is from Roy Peter Clark: 'Hit your target' and 'leave the best for last.'
View profile
Follow
and Paul Greaney

China and Russia are the clear winners of the the carbon-reducing provisions in the Democrats’ latest spending bill that aim to cut fossil fuel emissions by 40 percent by 2030, according to former President Donald Trump’s erstwhile economic adviser.

Stephen Moore, a Trump-era adviser and senior fellow at The Heritage Foundation, told NTD in a recent interview that the climate-related provisions of the Inflation Reduction Act—now en route to final House approval—would hamstring American energy production and benefit adversaries.

“The two big winners from this bill clearly are Russia and China,” Moore said, adding that he thinks the bill is not just bad for the U.S. economy but it’s “really bad for national security to give up our energy dominance.”

Moore pointed out that China—which is responsible for around five times more carbon emissions than the United States—is now building dozens of massive coal plants and “obviously, they don’t care about climate change.”

As a major exporter of fossil fuels, Russia also stands to gain from efforts to accelerate curbs on U.S. carbon emissions as that would keep crude prices elevated and bolster Russia’s revenue stream, Moore said.

The economist argued that the Biden administration has “basically declared a war on our fossil fuels,” while pointing to Germany’s “experiment” of going all-in on clean energy a decade or so ago that he said “basically led to a complete economic collapse.”

The measure also reinstates the superfund tax on crude and imported oil, which could lead to higher energy bills for households, and it includes a fee of up to $1,500 per ton for methane emissions.

Overall, the bill is set to more than triple power production from wind, solar, and energy storage capacity installations, according to an analysis from the American Clean Power Association (ACP).

“More simply, it means that roughly 40 percent of the country’s electricity will come from wind, solar, and energy storage by 2030,” ACP said in the analysis, which projects that the Inflation Reduction Act will, overall, deliver an estimated 525 to 550 gigawatts of new non-fossil fuel power by the end of the decade, up from the current 211 gigawatts.

The bill is also expected to generate over $900 billion in economic activity via the construction of clean energy projects between now and 2030, according to the association.

Moore said that he doesn’t object to renewable sources of energy but argued that market forces rather than government subsidies should be their key driver.

Moore also argued that, contrary to what its name implies, the bill won’t reduce inflation.

The Inflation Reduction Act “will increase inflation,” Moore said, adding that, “the reason we have 9 percent inflation today is because of the massive Biden spending spree.”

Some disagree with Moore about the bill’s impact on inflation.

Former Treasury Secretary Larry Summers said in an Aug. 9 interview in The Harvard Gazette that “the tendency of this bill will be to reduce inflation because over time it reduces demand by bringing down budget deficits.”

Summers also argued that it would bolster the supply of key commodities in the energy sector, helping push down prices.

Other backers of the bill, like Rep. Ro Khanna (D-Calif.), say the government subsidies for clean energy will have a knock-on effect and boost private investment in the sector and so accelerate cutting carbon emissions.

“This is going to be more massive than people realize,” Khanna told Politico in a recent interview.

“If the government invests $300 billion in solar, wind, batteries, and heat pumps, that has the potential to unlock trillions of dollars in private sector investment in climate,” he added.

Moore argued that the bill is less about the environment and more about money.

“This is a massive, now trillion-dollar, industry. This is about money, folks, this doesn’t have anything to do about cleaning up the environment or keeping our environment safe,” he said.

“This is massive numbers of huge companies and huge investors. They’re going to get very, very rich off of these hundreds and hundreds of billions of dollars of subsidies,” Moore added.

The group also panned the bill’s omitting of comprehensive permitting reform, which API believes is key for bolstering domestic energy production, lowering costs for consumers, and helping the country meet its emission objectives.

“Glaringly absent in the bill is permitting reform, which is required for America’s infrastructure needs and to bolster critical oil, natural gas, and renewable supplies to meet our current and future energy demand,” said Mike Sommers, API president and CEO, in a statement.