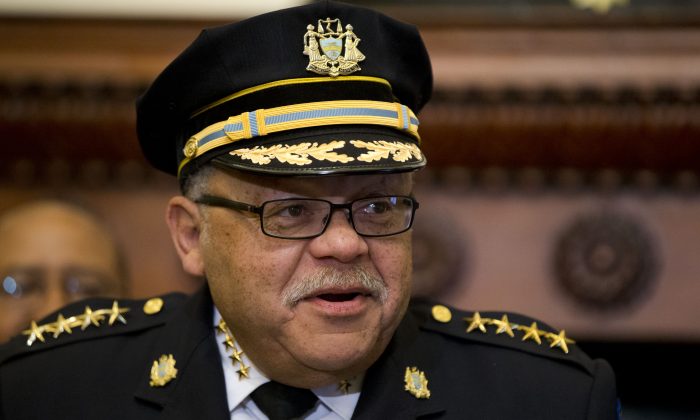 Philadelphia Police Commissioner Charles Ramsey speaks during a news conference Wednesday, Oct. 14, 2015, at City Hall in Philadelphia. Ramsey announced his retirement at the news conference as the administration that brought him to the city comes to an end. (AP Photo/Matt Rourke)
US

Charles Ramsey, the former Philadelphia Police Commissioner, likened the state of the United States to “sitting on a powder keg” following the shooting of five Dallas officers on Thursday night and protests about the police shootings of black men in Louisiana and Minnesota.

Ramsey, who was also appointed by President Barack Obama in 2014 as co-chair of the President’s Task Force on 21st Century Policing, made the comments on NBC’s “Meet the Press” on Sunday.

Ramsey says that despite the recent shootings, progress is being made. He described it as “two steps forward and one step backward.”

But, he stipulates, “You can call it a powder keg. You can say that we’re handling nitroglycerin. But obviously when you just look at what’s going on, we’re at a very critical point in the history of this country.”

“We’re going to have issues that are going to arise, but we have to keep pushing forward if we really want to see the kind of change that we need to bring these two sides together,” he tells NBC’S Chuck Todd..

“You’ve got too many people that are now with this extreme rhetoric, and that is just not good for anybody,” he says. “We need to come together, we need thoughtful people to sit down and engage in dialogue, but actually come up with solutions, not just finger-pointing and playing the blame game. That’s not helpful to anybody at all.

“But it is a very, very volatile time that we’re in right now.”

Ramsey says that while some crime rates are on the rise across America and there are around 13,000 murders per year, “these are not shootings by police.”

“These are people killing people,” he adds.

“Who do you think goes after the people responsible for these crimes? It’s the cops,” he says. “And we encounter a lot of very dangerous people out there on the street. So we can look at numbers in a variety of ways, but I think we need to keep it in context that police officers have a very challenging and often dangerous job. Now that’s not to say that we should not be mindful of the fact that we have some officers that use excessive force, that shoot people when it’s not totally justified. We’ve got to really address that and hold them accountable.

He also emphasizes the problem of a discrepancy in departmental training, procedure, and policy among the nation’s 18,000 police departments, which can vary depending on the community the cop serves.

The Democrats will gather in Philadelphia on July 25 to July 25. The Republicans will likewise gather in Cleveland on July 18.

Ramsey believes an incident will take place at either one of those events—or possibly both.