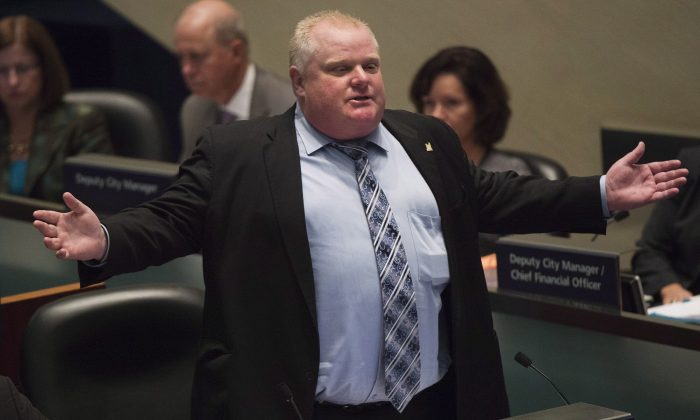 TORONTO—A court document suggests people close to Mayor Rob Ford were concerned about the mayor’s use of drugs, drunk driving and even the presence of suspected “prostitutes” in his office.

The previously redacted information comes from police interviews with former staffers of the mayor, in a document that contains allegations not proven in court.

Several of the staffers’ allegations centre around the night of St. Patrick’s Day last year, where a former staffer told police he saw Ford with another staffer, a friend, and a young, blond woman named Alana who he thought was “an escort or a prostitute.”

The same woman had been seen with Ford at a stag party, ex-staffer Isaac Ransom told police.
Ransom told police Ford was drinking from a 40-ounce bottle of Smirnoff vodka and by the time he arrived at the mayor’s office that night around 9 p.m. half of it was gone.

Another staffer, Chris Fickel, told police he was not with the mayor that night, but heard that the mayor went back to city hall with three staffers, a friend, and “two females that may have been prostitutes.”

The mayor then started “crying uncontrollably,” assaulted one staffer, pushed another and drove himself home, the documents say.

Ford’s former chief of staff Mark Towhey told police that Fickel confided in him that one time the mayor had stopped and drank a “mickey” of vodka while driving. After hearing this Towhey implemented a new rule that if a staff member was with the mayor they would be the one to drive, he told police.

The new revelations came hours after Ford admitted for the first time during a council meeting on Wednesday to buying illegal drugs while in office.

The “few isolated incidents” of substance abuse were due to “sheer stupidity” rather than an addiction, Ford said. The “mistakes” he had made were of a personal nature, he said.

Despite mounting pressure for him to resign or step aside, Ford repeated during the internationally televised council meeting that he is not going anywhere.

Councillors had voted 37-5 in favour of urging Ford to take a leave of absence.