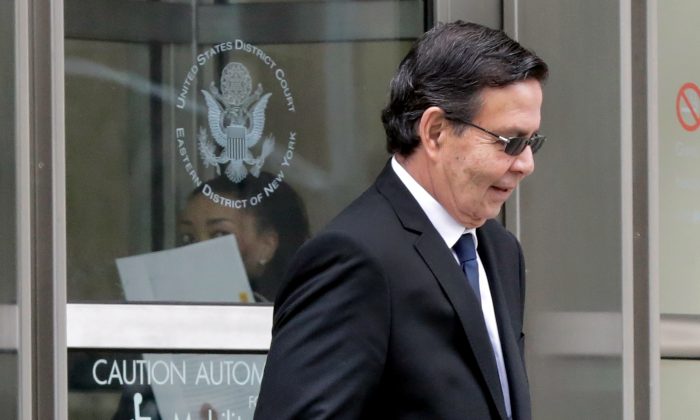 Ex-president of Honduras Admits to Bribery in FIFA Scandal

Rafael Callejas, a member of FIFA’s television and marketing committee, entered the plea to racketeering conspiracy and wire fraud conspiracy in federal court in Brooklyn. Each charge includes a maximum of 20 years in prison; he also agreed to forfeit $650,000.

He told the judge that he had accepted bribes and distributed some of the money to others. He said he knew it was wrong.

Initial arrests in the case last May resulted in charges against 14 people, including seven top FIFA officials arrested at a Swiss hotel.

His surrender came after 16 additional defendants, most from Central and South America, were charged in the fall in a second wave of the prosecution that focused on a generation of soccer leaders in South America, a bedrock of FIFA and World Cup history.

In that crackdown, five current and former members of FIFA’s ruling executive committee were arrested at the same Zurich hotel where the similar raid on FIFA officials occurred a half-year earlier.

Those arrests came just before FIFA’s executive committee met to approve reform and transparency measures that gained support after the scandal was revealed.

In all, about 20 soccer officials have been indicted on charges related to the U.S. investigation of corruption in the sport.

An indictment returned in Brooklyn in November charged Callejas for his alleged role in a bribery scheme involving lucrative broadcasting and hosting rights for the World Cup and soccer’s other biggest events.

FIFA Reduces Bans for Blatter, Platini From 8 to 6 Years

In a lengthy indictment, prosecutors allege that hundreds of millions of dollars in illegal payments made over the past quarter-century involved the use of U.S. banks and meetings in the United States.

The Justice Department has said that numerous guilty pleas in the case have resulted in agreements to forfeit over $190 million, and another $100 million has been restrained in the U.S. and abroad. The U.S. has sought to restrain assets in 13 countries.