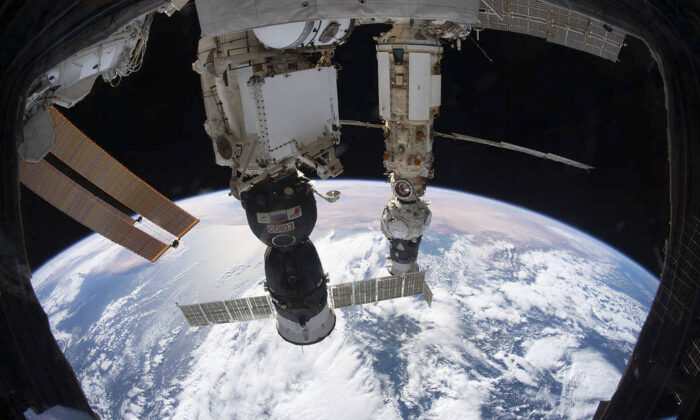 The International Space Station orbited 264 miles above the Tyrrhenian Sea with the Soyuz MS-19 crew ship docked to the Rassvet module and the Prichal module, still attached to the Progress delivery craft, docked to the Nauka multipurpose module on Dec. 6, 2021. (NASA via AP)
Space

ATLANTA—Tensions in eastern Ukraine and heightened Western fears of a Russian invasion should not have a significant impact on the International Space Station or U.S.–Russia cooperation in space, the former head of the National Space Council told The Associated Press.

Four NASA astronauts, two Russian cosmonauts and one European astronaut are currently on the space station.

Scott Pace, who served as executive secretary of the space council under President Donald Trump and is now the director of the Space Policy Institute at George Washington University, said the space station “has been largely isolated” from political events.

“It’s possible to imagine a break with Russia that would endanger the space station, but that would be at the level of a dropping diplomatic relations,” said Pace. “That would be something that would be an utterly last resort so I don’t really see that happening unless there is a wider military confrontation.”

The space station, an international partnership of five space agencies from 15 countries, including Canada, several countries in Europe, Japan, Russia, and the United States, launched in 1998 and morphed into a complex that’s almost as long as a football field, with eight miles of electrical wiring, an acre of solar panels and three high-tech labs.

It marked two decades of people continuously living and working in orbit in 2020.

The first crew—American Bill Shepherd and Russians Sergei Krikalev and Yuri Gidzenko—blasted off from Kazakhstan on Oct. 31, 2000. Two days later, they swung open the space station doors, and clasped their hands in unity.

The three astronauts got along fine but tension sometimes bubbled up with the two mission controls, in Houston and outside Moscow.

Shepherd, during a NASA panel discussion with his crewmates, said he got so frustrated with the “conflicting marching orders” that he insisted they come up with a single plan.

Russia kept station crews coming and going after NASA’s Columbia disaster in 2003 and after the space shuttles retired in 2011.

In 2020, SpaceX ended a nine-year launch drought for NASA and became the first private company to launch Americans to the space station.

“It is a way of undertaking common endeavors but that power is not infinite and terrestrial conflicts on Earth can still get in the way,” said Pace. “Space is ever more critical to our daily life and it’s something everybody should be aware of.”

Earlier this year, NATO Secretary-General Jens Stoltenberg, who chaired a meeting of the NATO–Russia Council in Brussels, said he was keen to discuss ways to prevent dangerous military incidents or accidents involving Russia and the Western allies, reducing space and cyber threats, as well as setting limits on missile deployments and other arms control initiatives.

There have been concerns raised in Congress about the impact that conflict over Ukraine could have on the International Space Station.

Lawmakers have specifically exempted space cooperation from previous sanctions and can be expected to make similar arguments against targeting it as the administration considers its next steps over Ukraine.