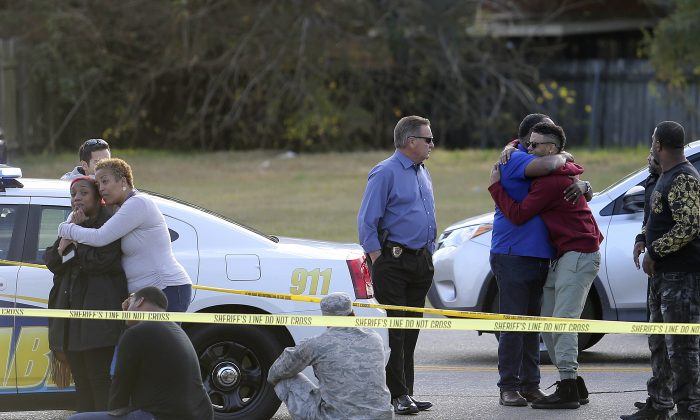 Friends and family of former NFL player Joe McKnight gather at the scene of his shooting death as the Jefferson Parish Sheriff's Office investigates in Terrytown, La., on Dec. 1, 2016. (Michael DeMocker/NOLA.com The Times-Picayune via AP)
NFL

Former NFL player Joe McKnight was shot to death following an argument at an intersection with another motorist outside New Orleans, authorities said.

The 28-year-old running back was standing outside his car when he was shot by Ronald Gasser, 54, Normand said during a news conference at the scene of the shooting.

“The only thing we know right now, everything else is conjecture, is that Mr. Gasser did in fact shoot Mr. McKnight,” Normand said.

McKnight is the second former NFL player this year to die in the New Orleans area as a result of a possible road-rage incident. Former New Orleans Saints player Will Smith was killed in April in a shooting that was sparked over a traffic altercation.

Norman said investigators have Gasser in custody and he’s being questioned, along with a number of witnesses. Col. John Fortunato, a sheriff’s office spokesman, said they anticipate charging Gasser, but with what had not yet been determined.

“We will release additional details when we get through with the interviews,” Normand said.

Normand said Gasser, whose hometown was not immediately released, stayed at the scene and relinquished his weapon to responding officers.

The sheriff said he did not know where the incident started, but noted that McKnight was standing outside his vehicle when he was shot. He did not release any details on the number of times McKnight was shot, saying the coroner’s office would do so.

Normand said no gun was found outside either vehicle.

McKnight played three seasons for the New York Jets and one with the Kansas City Chiefs. He spent this season in the Canadian Football League, playing two games for the Edmonton Eskimos and three for the Saskatchewan Roughriders. He ran for 150 yards against Toronto on Oct. 15 in his Saskatchewan debut.

“We send our deepest sympathies to Joe’s family, friends, and all those impacted by this tragedy,” Roughriders general manager and coach Chris Jones said in a statement.

McKnight was considered the No. 1 running back recruit in the country when he came out of John Curtis Christian School in Louisiana in 2006 and signed with the University of Southern California, where he played under Pete Carroll. With his running and catching skills, McKnight was often compared to do-it-all running back Reggie Bush, a USC star who was the No. 2 overall pick by New Orleans in the 2006 draft.

Bush took to Twitter to offer his condolences: “RIP my brother Joe McKnight,” he posted, “this one hurts bad.”

“For a life to be lost so senselessly is just beyond description,” said JT Curtis, McKnight’s high school coach, who’s been head coach there for nearly five decades. “Right now it’s pretty devastating.”

“He was just a good kid,” the coach added.

After a sometimes-spectacular college career in which he ran for 2,213 yards and 13 touchdowns and caught 66 passes for 542 yards and two scores in three seasons, McKnight was drafted by the Jets in the fourth round in 2010.

His NFL career got off to a shaky start, marked by his first rookie camp practice in which he dropped a few passes, had both calves cramp up and later vomited on the side of the field because of nerves and lack of conditioning. McKnight saw limited action as a rookie, but started the regular-season finale and rushed for 158 yards on 32 carries.

McKnight assumed the role as the Jets’ primary kick returner in 2011, and led the NFL with a 31.6 yard kickoff return average that season. That included a franchise-record 107-yarder in 2011 against Baltimore that also stands as the team’s longest play.

He was released by the Jets as part of their final cuts after training camp in 2013 and spent that season out of football. McKnight signed with Kansas City in January 2014 and had two touchdown catches in a game for the Chiefs early that season before tearing his Achilles tendon during a practice and missing the rest of the year.

Several of McKnight’s former teammates and friends took to social media to express shock and sadness at the news, and to offer condolences to his family.

The Jets posted a photo of McKnight with the words “Joe McKnight 1988-2016” on their official Twitter account. “Rest in peace, Joe McKnight,” the team said. “Our thoughts and condolences are with his loved ones.”

Former Jets teammate Antonio Cromartie wrote on Twitter: “Just got a message saying my former teammate Joe McKnight was killed today. This hurt to the heart. I can’t stop crying.”