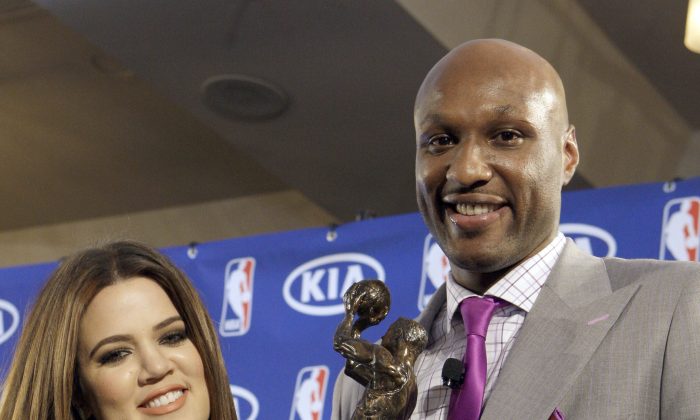 FILE - In this April 19, 2011, file photo, Los Angeles Lakers' Lamar Odom and his wife, Khloe Kardashian, pose with his trophy as the winner of the 2010-2011 NBA Sixth Man Award, as the basketball league's top reserve, at a news conference in Los Angeles. Odom, the former NBA star and reality TV personality embraced by teammates and fans alike for his humble approach to fame, was hospitalized and his estranged wife Khloe Kardashian is by his side, after being found unresponsive in a Nevada brothel where he had been staying for days. (AP Photo/Reed Saxon, File)
Entertainment

LAS VEGAS—The latest on the hospitalization of Lamar Odom, who was found unconscious in a Nevada brothel (all times local):

The Rev. Jesse Jackson says Lamar Odom is on life support but that his doctors think he’s improving.

Jackson visited the former NBA star and reality TV personality at a Las Vegas hospital Wednesday morning. He says Odom was unresponsive Tuesday but “has some responsiveness now.”

Jackson added: “Apparently from what the doctor said, he was much better off today than yesterday.”

Jackson was in town for Tuesday’s Democratic presidential debate. He stopped and spoke to the media as he was leaving the hospital Wednesday.

He says Khloe Kardashian and some of Odom’s childhood friends were by Odom’s side, and former Lakers teammate Kobe Bryant visited him last night.

Jackson says Odom’s loved ones are “just holding hands and hoping he can bounce back.”

Odom was found unconscious Tuesday afternoon at the Love Ranch brothel in Crystal, Nevada, about 70 miles from Las Vegas.

Wehrly said detectives worked until early Wednesday collecting evidence and interviewing employees at the brothel where the former NBA player and reality show star was found unconscious. She said she couldn’t immediately say what they believe caused Odom to become unconscious.

But she acknowledged that medics usually turn someone on their side, as Odom was, to relieve pressure on the chest and help them breathe.

The sheriff didn’t say whether Odom ever regained consciousness while he was stabilized and taken to hospitals.

Hof said Odom didn’t use drugs in the presence of anyone in the house.

Reality TV personality Khloe Kardashian has been by Lamar Odom’s side at a Las Vegas hospital since Tuesday evening.

That’s according to a person close to the Kardashians who spoke anonymously because she wasn’t authorized to speak to the press. Kardashian and Odom were married in 2009, but Kardashian filed for divorce in 2013, citing irreconcilable differences.

Odom was found unconscious Tuesday afternoon at the Love Ranch brothel in Crystal, Nevada, about 70 miles outside of Las Vegas.

Authorities said the 35-year-old was stabilized at the scene before being taken to a hospital. He was then transferred to Sunrise Hospital and Medical Center in Las Vegas.

Owner Dennis Hof said Odom had been at his brothel since Saturday.

LAS VEGAS—Lamar Odom, the former NBA star and reality TV personality embraced by teammates and fans alike for his humble approach to fame, was hospitalized on life support Wednesday, his estranged wife Khloe Kardashian by his side, after spending four days in a brothel. Authorities sought a warrant for blood evidence of drugs.

Hospital officials provided no immediate word on the condition of Odom, a 35-year-old former Los Angeles Laker and member-by-marriage of the Kardashian clan, who was found face down at the Love Ranch Tuesday afternoon, according to brothel owner Dennis Hof.

But the Rev. Jesse Jackson, who visited Odom at the hospital Wednesday, said doctors believe he is recovering after being totally unresponsive Tuesday.

“Apparently from what the doctor said, he was much better off today than yesterday. He at least has some responsiveness now,” Jackson said.

Kardashian and some of Odom’s childhood friends were by his side, and former Lakers teammate Kobe Bryant visited him last night, Jackson said.

“He’s got tubes in him now but we felt inspired by his presence,” he said. “We’re just holding hands and hoping he can bounce back.”

Odom started “throwing up all kinds of stuff” when the 911 operator told them to turn him on his side, Hof told The Assoicated Press in a phone interview.

Hof said Odom arrived alone Saturday and “spent time socializing with some of my girls,” but wasn’t seen taking any illegal drugs. “He was polite and reserved, and he told multiple employees that he was there to get some privacy and spend some time relaxing,” he said in a statement.

“He largely kept to himself, and at no time did he engage in any drug use in the presence of anyone in the house. He did drink alcohol from our bar, and was taking some herbal sexual enhancement capsules. At his request, he spent Monday evening alone in his suite,” the statement said.

“It’s incredibly sad,” Hof told the AP. “He just wanted to get away, have a good time and relax.”

Odom emerged as one of the most promising basketball talents of his generation after a difficult childhood in Queens, where his mother died of cancer when he was 12 and his father was addicted to heroin. He eventually won two NBA championship rings and an Olympic medal, and became a star on reality TV. But his life never seemed free of struggle and tragedy, most tragically the death of his infant son in 2006.

He spent most of his 14-year NBA career in Los Angeles with the Lakers and Clippers, becoming a fan favorite and beloved teammate. Then he took fame even farther, carrying on a whirlwind romance with Khloe Kardashian. Their huge 2009 wedding was taped for the E! network, and their marriage chronicled on the “Khloe & Lamar” show, where Odom he appeared to be a romantic partner, very much wanting more children that never came.

Odom appeared on nearly two dozen episodes of “Keeping Up with the Kardashians” and several installments of “Kourtney & Kim Take Miami” as well as the show with his wife, which aired in 2011 and 2012.

After seven years with the Lakers, he felt crushed in December 2011 when the club traded him. He played his final NBA game 18 months later, and his last years were a spiral of arrest, estrangement and widespread rumors of drug use.

Kardashian filed for divorce in 2013, citing irreconcilable differences, his behavior became more erratic. His divorce from Kardashian has not yet received final approval from a judge, and she .

Hof, who owns several legal brothels in Nevada, told the AP that his staff had picked up Odom from a home in Las Vegas on Saturday, and he seemed “happy, he was sleeping every night,” while visiting.

Two women went to check on Odom Tuesday afternoon after not hearing from him since early morning, and found him face down and unconscious, he said.

Authorities were called to the ranch in Crystal, Nevada, about 3:15 p.m. Tuesday Crystal, Nevada, the sheriff said. Odom was taken to Desert View Hospital in nearby Pahrump, where they tried to airlift him to Las Vegas, but the 6-foot-10-inch Odom was too tall for the available helicopter, so he was driven about 65 miles instead to Sunrise Hospital & Medical Center.

People have always seemed to root for Odom, whose prematurely weathered face wore the impact of his personal tragedies in a friendly way, seeming to acknowledge his lowest points even when he reached the heights of pop-culture fame.

The neighborhood he grew up in, South Jamaica in Queens, was rampant with drugs and street crime, and he never forgot where he came from, writing tributes to his mother and grandmother on his sneakers before games.

The rangy kid with a beautiful shot and exceptional ball-handling skills drew comparisons to Magic Johnson when he played on a traveling youth team alongside Ron Artest, his future Lakers teammate. Hotly recruited from high school, he spent a year at the University of Nevada, Las Vegas, where NCAA investigations kept him from playing, and then spent a year at the University of Rhode Island, winning the conference title.

Tall enough to play center and skilled enough to be a playmaking guard, Odom’s talent was so coveted that he was picked fourth in the 1999 NBA draft by the moribund Clippers. Suddenly, he was “living like a 19-year-old rock star,” he said, and was soon suspended for smoking marijuana.

Odom had two children, Destiny and Lamar Jr., with an ex-girlfriend, Liza Morales. They had another infant son, Jayden, whose crib death in 2006 was attributed to Sudden Infant Death Syndrome.

Odom spent the best years of his career with the Lakers, where his selfless play won him the NBA’s Sixth Man of the Year award. They won a second NBA final as he played alongside Artest, his childhood friend now known as Metta World Peace.

Odom loved being a Laker, and fans loved him back: They began following him down Figueroa Street from his downtown Los Angeles loft to Staples Center before playoff games. His obsessive consumption of candy endeared him even more.

Odom loved wearing the Lakers’ purple and gold, but as his life became a public spectacle, his basketball career faded. He was heartbroken in December 2011 when the Lakers attempted to trade him to New Orleans in a multiplayer trade for Chris Paul. He eventually went to Dallas, and was out of the NBA just two years later.

After basketball, Odom’s behavior increasingly worried family and friends. He was arrested in August 2013 and charged with DUI, eventually pleading no contest. Kardashian filed for divorce four months after his arrest, and she is currently dating Houston Rockets star James Harden.

Constant rumors of drug use followed; Odom was photographed repeatedly on Skid Row. He signed with the New York Knicks in April 2014 right before the season ended, but never played.

The Lakers played an exhibition game Tuesday night in Las Vegas. Bryant and Metta World Peace, Odom’s childhood friend from Queens, are his only remaining teammates on the roster.

“There’s not one word I could say that would make sense,” World Peace said, clearly distraught, after the game. Bryant left without speaking to reporters.