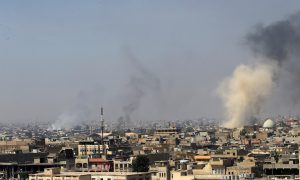 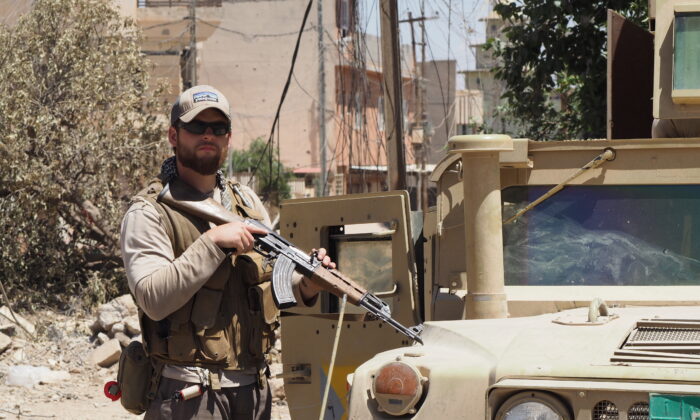 Ex-Navy SEAL Battles Evil in the City of Mosul

Ephraim Mattos, a former Navy SEAL, went to Iraq in 2017 after joining the Free Burma Rangers (FBR), a humanitarian organization that operates in war zones. He was very aware that ISIS was wreaking havoc in Iraq and Syria, but above all, he wanted to help the civilians stuck in the middle of the fighting.

“The reason I chose to go there was just it was the biggest need in the world I could see at the time,” Mattos said.

Initially, he thought he would just be doing humanitarian work. Little did he know that he would be involved in the fighting as well.

When Mattos first arrived in Iraq, he spent a month on the outskirts of Mosul. Mattos was working with an Iraqi armored unit that was clearing the villages and towns outside of Mosul, and he didn’t think at the time he would be going into the city.

However, on May 4, 2017, Mattos received word that they would be heading toward western Mosul. Initially, he thought they were just going to perform a small push toward the city, but they ended up all the way at the edge of the city. What was supposed to be a three-hour mission ultimately turned into three days of nonstop fighting. Iraqi tanks fired, and performed a cavalry charge toward Mosul. ISIS fighters opened fire, dropped mortars, and snipers shot at anyone outside of a tank.

When they arrived in Mosul, Mattos witnessed the poverty and destruction that had plagued the city. He discovered that ISIS was shooting civilians who were trying to flee. Within the first few hours of fighting, their driver had been shot six times while trying to rescue their interpreter, who had been wounded. Others took shrapnel.

“This place was just a complete meat grinder. The air was just thick with bullets,” Mattos recalled.

The very first day Mattos held the hand of a little girl who was unconscious after being shot in the head, and he wept. After he pulled himself together, he became even more motivated and committed to help civilians and fight ISIS.

The first three days consisted of treating patients all day and into the night. For the next 30 days, they pushed further and further into the city. As the days went by, Mattos witnessed countless atrocities, which became more horrific as they got closer to the city center.

“On a personal level it made it very easy to say ‘You know what? Yeah. I’ll die to end this if I have to,’ and with the level of evil that was there I feel it just hardened our hearts and made us more determined to fight them and end them because of their evil,” Mattos explained.

On June 1, 2017, Mattos, the FBR, and the Iraqi army received news that scores of civilians were being shot. They set up a medical checkpoint and started to treat patients. Mattos saw civilians who were pale, disturbed, and in shock as they approached the checkpoint. One man came to them and fell to the ground crying. ISIS had shot both of his daughters in front of him that same day.

They spent the entire night treating people, as more wounded civilians tried to flee under the cover of darkness.

The Killing Fields of Mosul

The following morning, Mattos saw what used to be a six-lane highway that was covered in rubble and strewn with burned vehicles. As they approached the road, they began seeing bodies in the street. They went into a building to get a better view, and from there they could see dozens of bodies scattered throughout the street.

“I saw it and my first thought was killing fields,” Mattos remembered. “It was hard to fathom that stuff like that still happens today.”

One elderly man was slumped over dead in his wheelchair. Two little girls lay dead next to each other, and they realized they were probably the daughters of the man they had spoken with the day before. They also saw kids and two men who were alive amongst the bodies. Some kids walked from body to body looking for food and water.

“The kids had no concept of what was going on. They’re just stone-faced, clearly in shock … they didn’t know what to do,” Mattos recalled.

Mattos and the others knew they had to go save them. However, there was a strategic problem. These civilians were deep in ISIS-controlled territory. Eventually, the Iraqi army provided Mattos and the other volunteers with a tank. They were able to call in a smoke screen from the American military, which provided them with a bit of cover as they pushed forward in the middle of the street to rescue the survivors.

As soon as Mattos and other volunteers got behind the tank, ISIS immediately started shooting and dropping mortars. By the time they reached the bodies, many of the kids had died. But there were one little girl and two elderly men who they knew were still alive.

Mattos was trying to pick up one of the elderly men and get him to cover behind an Iraqi tank. However, the elderly man was too injured to be picked up and would have bled out if Mattos had tried to carry him. Mattos and his team came across a table top on the street, and turned it into a makeshift stretcher.

They tried to secure the man on the table top, but they didn’t have time as the Iraqi tank began to back up. The man began to slip off the table top as ISIS continued shooting, and Mattos returned fire before trying to move the man back onto the stretcher. As Mattos stepped behind the tank, he was immediately shot through his right calf and fell. The tank was about to run him over.

“I had no choice. It was either get up and hopefully your leg doesn’t snap in half when you put weight on it, or die. Those are my two options,” Mattos said.

Mattos got up, and his bone held. They continued moving backward toward Iraqi armor position, and Mattos applied a tourniquet to his leg. Amidst all this, he tripped over what he believed was the body of one of the daughters of the man they had encountered at the medical checkpoint the day before.

His leg, meanwhile, was not faring well.

“Now I can see that there’s two holes in my leg, and they’re just gushing blood. Bright red oxygenated blood, so I thought there was a small chance maybe I’d hit an artery or something. So I knew that I’ve only got maybe four or five minutes to live max if I did hit an artery, and I could feel the blood gushing down and getting in my boot and everything,” Mattos recalled.

Once they reached the Iraqi army lines, they still had to run across a street to safety. However, they needed cover to get across the street without getting shot. Mattos was lightheaded and had lost a lot of blood. He didn’t have time to wait. He hobbled across the street on his wounded leg. ISIS opened fire but missed. Medics began to work on his leg, and a French journalist who had embedded with them drove a Humvee into the street to retrieve the others under fire. Ultimately, they were able to save the little girl and one of the elderly men.

Mattos was taken to a bombed-out mosque that was being used as a makeshift field hospital. After he was treated there, he was taken to a Kurdish hospital in Erbil. At night, the patients’ pain killers would wear off and he could hear them screaming and crying in the darkness. He was able to leave the next day, and after healing for a couple of weeks, Mattos flew back to the United States.

“I was just glad to be alive,” Mattos said.

After his experience, Mattos decided to write a book entitled “City of Death: Humanitarian Warriors in the Battle of Mosul.” He had always had a passion for writing, and he had kept a journal while he was fighting in Mosul. He knew he and the others had been part of something historic, and he felt compelled to tell the world about what had taken place.

As he wrote, the memory of the little girl he had tripped over guided him. He didn’t want her to be forgotten.

Not only did he want to tell the story of the battle and the evil of ISIS, but he also wanted to draw attention to the Iraqis who had fought and died to liberate the city from ISIS. In fact, the book is dedicated to the Iraqi army’s ninth armored division. Together, they had liberated Mosul from the rule of ISIS.

“Their courage, their bravery, their sacrifice was something like I had never seen before,” Mattos said.