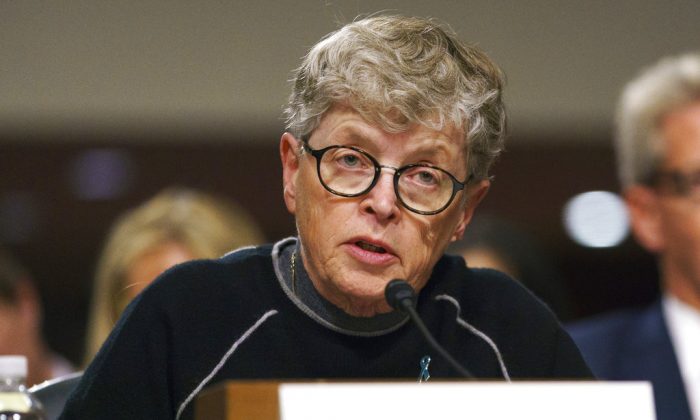 Ex-MSU President Charged With Lying to Police About Nassar

LANSING, Mich.—Ex-Michigan State University President Lou Anna Simon was charged on Nov. 20 with lying to police during an investigation of the handling of serial sexual abuser Larry Nassar—the third current or former campus official other than Nassar to face criminal charges in the scandal.

Simon, who stepped down under pressure in January, spoke with state police investigators on May 1. She is accused of making two false and misleading statements—that she was unaware of the nature of a sexual misconduct complaint that sparked the school’s 2014 Title IX probe of Nassar, and that she only knew a sports medicine doctor, not Nassar himself, was under investigation at that time.

If convicted of two felony and two misdemeanor counts of lying to a peace officer, the 71-year-old Simon faces up to four years in prison. The Mason resident is scheduled to be arraigned on Monday in Eaton County near Lansing.

One of her attorneys, Lee Silver, called the charges “completely baseless” and said he had not seen a “shred of evidence” to support them.

“In my opinion, the real crime here is that these charges are even being brought,” he said. “We are confident that when we have our day in court, Dr. Simon will be exonerated and these charges will be proven to have no merit.”

University spokeswoman Emily Guerrant said Simon, who stayed on at MSU to do research while preparing for a return to teaching, is taking an immediate unpaid leave of absence from her $750,000-a-year job “to focus on her legal situation.”

Simon is the fifth person to be criminally charged in the wake of Nassar’s convictions for molesting young female athletes under the guise of treatment. Numerous other people have lost their jobs or have been sued.

In June, Simon told a congressional committee that she was “horrified” that Nassar’s crimes occurred during her tenure and had she known he was sexually abusing young women, “I would have taken immediate action to prevent him from preying on additional victims.” She also told senators that when she was informed of the Title IX probe in 2014, she knew it involved a “sports medicine physician” but did not know Nassar was the one under review.

In August, Schuette charged former MSU gymnastics head coach Kathie Klages with lying to an investigator when she denied that witnesses told her years ago about being sexually assaulted by Nassar. In March, the ex-dean of the osteopathic medicine school, William Strampel, was charged with neglecting his duty to enforce examining-room restrictions imposed on Nassar after the 2014 Title IX investigation.

That probe, initiated by a patient, resulted in the school clearing Nassar. He was fired in 2016 after another victim went public and filed Title IX and police complaints.

In Texas, former USA Gymnastics President Steve Penny was charged last month with tampering with evidence while a former sports medicine trainer, Debra Van Horn, was charged in June with “acting as a party” with Nassar in the sexual assault of a child.

Hundreds of girls and women have said Nassar molested them when he was a physician, including while he worked at Michigan State and Indianapolis-based USA Gymnastics, which trains U.S. Olympians. Nassar, 55, last year pleaded guilty to sexually assaulting nine victims and possessing child pornography, and his sentences equate to life in prison.

The Michigan State scandal has been likened to the one at Penn State University, where former president Graham Spanier and two other ex-administrators were prosecuted for child endangerment for not reporting a 2001 complaint about a sexual abuse allegation involving former assistant football coach Jerry Sandusky.