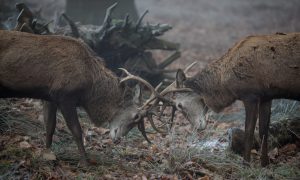 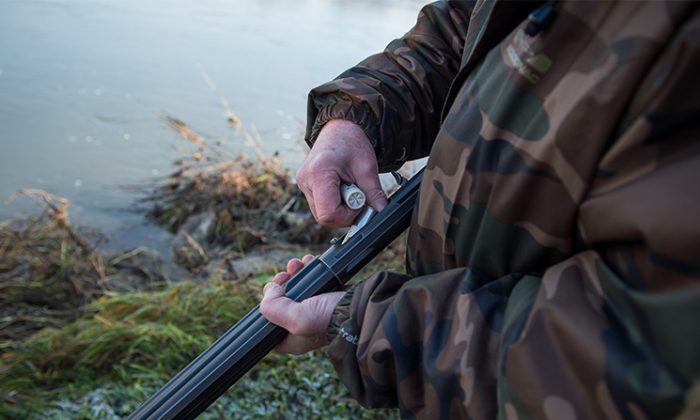 A gun in a file photo. (Guillaume Souvant/AFP/Getty Images)
Crime and Incidents

A former college football player had to get his leg amputated after a dog pulled the trigger of a gun during a hunting trip.

Micah Heckford of Baton Rouge was with a group of friends on an annual hunting trip in Mississippi on Dec. 28, 2018, on the land of Matt Branch, a former offensive lineman for Louisiana State University.

The morning of the shooting started out normal as the group discussed their hunting plans and drank coffee.

Heckford, Branch, Branch’s cousin David Joe Branch, Branch’s younger brother Connor Branch, and their friend, David Lamonte, planned to spread out and hunt along a slough before regrouping later in the morning and hunting together.

“The gun shot. Everybody looked up. The first thing I saw was Matt and within two to three seconds he realized he was hit,” Heckford told the Mississippi Clarion-Ledger.

“In the midst of the chaos at this point, I ran over to Matt to assess what had happened,” Heckford added, noting that Branch was screaming. “We had no clue what the damage was at this point in time.”

The group rushed Branch to a road where first responders could meet them and firefighters soon arrived. They cut off Branch’s waders and pants.

'His pants were just soaked in blood.' Hunter's leg amputated in Miss. after dog shoots him https://t.co/KY2mRTJIN6 pic.twitter.com/bENYzDEoAl

“I think that’s when it hit me how serious it was,” Heckford said. “It was at that point in time I realized how much he had bled. His pants were just soaked in blood.”

A family friend, Kirsten Herbert,  who launched a GoFundMe fundraiser for the Branch family said that Branch was rushed to the hospital and underwent several hours of surgery and “massive blood transfusions” before doctors decided to amputate part of his left leg in order to save his life.

“Normally, sustaining these injuries while in such a remote geographic area would be life ending for most any human being, but miraculously Matt has survived,” Kristin Herbert wrote.

“He currently remains in critical condition in ICU and is fighting to recover. However, the recovery process will take a very long time, an abundance of love, support, and encouragement for Matt and his family to overcome this life-changing accident.”

“Ultimately, we are so appreciative of the extraordinary care he has received to get him this far as well as each person involved in saving his life including the hunting party, the paramedics, the staff at River Regional and certainly Dr. Baldwin, and the incredible staff at University of Mississippi Medical Center,” Herbert added.

“On behalf of Matt, Liana, and Barrett Branch, we would like to extend our most sincere appreciation for the outpouring of love and these donated gifts. Your generosity will directly help to offset expenses incurred during this tragic time and could never be repaid.”

The fundraiser has raised more than $73,000 over eight days. Branch has a wife and a 1-year-old son.