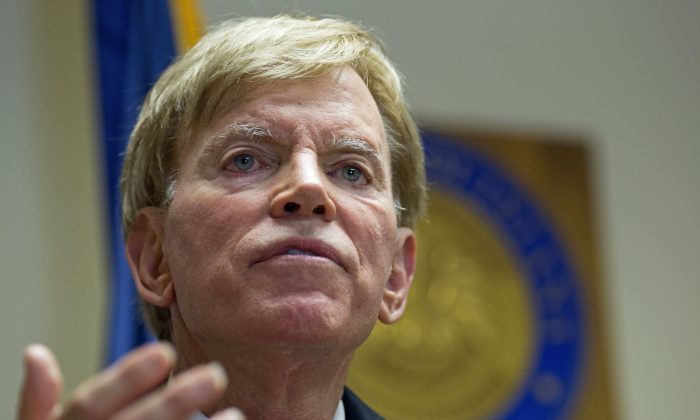 Former KKK leader David Duke talks to the media at the Louisiana Secretary of State's office in Baton Rouge, La., on July 22, 2016, after registering to run for the U.S. (AP Photo/Max Becherer)
US

BATON ROUGE, La.—A quarter century after his credible run for governor of Louisiana rattled the national political establishment, white supremacist David Duke has jumped into the crowded competition for a U.S. Senate seat in his home state, receiving rebuke from Republicans who don’t want him running on a ballot as a member of their party.

Duke—once an avowed Nazi sympathizer who headed a Ku Klux Klan group—fell back into relative obscurity after losing a 1991 runoff to scandal-scarred Democrat Edwin Edwards.

A follow-up presidential run from Duke went nowhere, and 10 years later, he pleaded guilty to bilking supporters in 2002 and spent a year in federal prison, although he later declared he did nothing wrong. He had occasional run-ins with authorities in Europe, such as the time he was detained by Czech authorities in 2009 on suspicion of denying the Holocaust.

On Friday, however, he declared “the climate of this country has moved in my direction,” as he registered to run on the Nov. 8 ballot as a Republican for the Senate seat being vacated by David Vitter. Duke said he was partially spurred by the recent shooting deaths of three law enforcement officers by a black man.

Duke said he’s espoused principles for years that are similar to the themes Republicans are now supporting in Donald Trump’s campaign, on issues such as immigration and trade.

He said Americans are “embracing the core issues I have fought for my entire life.”

Earlier, his announcement had appeared on his website, nudging down links to pages decrying “Zionist terror” and the “Jewish Supremacist Role in anti-European Movements.”

Duke, 66, was associated with neo-Nazi groups as a student at LSU. He was grand wizard of the Knights of the Ku Klux Klan in the 1970s and headed a “white unity group”—the National Association for the Advancement of White People—in the 1980s. He is registered with the GOP, but Republicans at the state and federal level quickly denounced his Senate bid.

Roger Villere, chairman of the Republican Party of Louisiana, said in a statement the party “will play an active role in opposing” him, calling Duke a “hate-filled fraud who does not embody the values of the Republican Party.” Ward Baker, with the National Republican Senatorial Committee, said Duke will not have the support of his organization “under any circumstance.”

The launch of Duke’s campaign comes as Louisiana grapples with deep racial tensions after the shooting death of a black man by white police officers and the killing of three law enforcement officers. Duke said he was “shattered” by the slayings of police.

In a lengthy speech, Duke talked of the “massive racial discrimination going on right now against European Americans,” and what he called a biased media working against him. He called the Black Lives Matter movement a “terrorist organization” and said he wanted equal rights for everyone.

Duke is among two dozen candidates seeking the open Senate seat. Republican and Democratic opponents sought to distance themselves from Duke’s campaign, with many offering critical statements of his candidacy.

Duke reacted angrily Friday to a question about whether he remained involved with the KKK. He said he was active with the organization for four years in the mid-1970s. He described it as “four decades ago in a nonviolent group.”

The man who beat him in that historic 1991 governor’s race, Edwards said Duke would have a “hard row to hoe” in the upcoming election but there might be a “niche” for him.

“There’s a great deal of racial unrest in the country, and he may capitalize on it,” Edwards said.

Raymond Jetson, an African-American pastor in Baton Rouge who was a state lawmaker during Duke’s tenure, said Duke can potentially thrive with the national political scene currently so divided.

“You have a climate that … highlights and stresses the divisions within us, a climate that in so many ways has a strong racial overtone and challenge to it,” Jetson said.