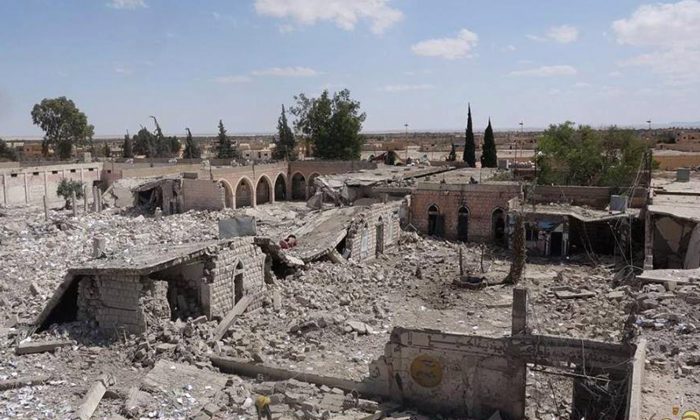 This photo released on Saturday May 30, 2015 by a militant website, which has been verified and is consistent with other AP reporting, shows Tadmur prison, blown up and destroyed by the Islamic State group in Palmyra (Tadmur in Arabic), Homs province, Syria. The prison was where government opponents were held and reports over the years said it was the site of beatings and torture. (Militant website via AP, File)
Middle East

BEIRUT—For decades, just mentioning the name Tadmur Prison was enough to send chills down the spine of Syrians.

The notorious facility in the desert of central Syria was where thousands of dissidents were reported to have been beaten, humiliated, and systematically tortured for opposing the Assad family’s rule.

This weekend, it was demolished by the Islamic State in Iraq and Syria (ISIS) group, which took over the site near the ancient town of Palmyra last month, bringing mixed emotions from many Syrians who wanted it to remain standing so future generations would know its horrors.

“They destroyed our memories, our catastrophe, and the walls that we leaned on and told our stories to,” said Ali Aboudehn, a Lebanese who spent four harrowing years in Tadmur. “They destroyed the land that absorbed our blood because of torture.”

The sprawling prison—once one of Syria’s darkest secrets—is located a few miles east of Palmyra, a desert oasis famous for its Roman-era colonnades, temples, and artifacts. There were fears that the ISIS group might destroy the 2,000-year-old heritage site.

Instead, over the weekend, they focused their destructive efforts on Tadmur Prison.

The extremists released photos that showed men carrying plastic containers apparently filled with explosives. A video showed parts of the prison in rubble.

Osama al-Khatib, a Syrian opposition activist who fled Palmyra for Turkey three weeks ago, said the extremists destroyed only the part of the prison that held members of the military, including army defectors. He said the facility where political prisoners were held is still intact. His report could not be independently verified.

Located about 250 kilometers (155 miles) northeast of Damascus, Tadmur Prison is part of a walled-off military complex that includes military and civilian units as well as an air base. Former prisoners say it could hold up to 7,000 inmates, although the number fell in recent years. By the time ISIS swept into Palmyra last month, the inmates had been moved elsewhere and the prison was empty.

The bloodiest incident in Tadmur’s history came in June 1980, a day after members of the Muslim Brotherhood staged a failed assassination attempt against Hafez Assad. In retaliation, troops belonging to Assad’s brother Rifaat reportedly entered the prison and shot up to 1,000 prisoners who belonged to the Brotherhood.

Al-Khatib, who was not born at the time, said his parents told him about the incident, recalling that they heard shooting for much of that night. Afterward, the government took bulldozers from Palmyra to dig mass graves in the nearby Oweimer Mountain just north of the town, he said.

People would pass by the prison, but no one dared look inside.
— Osama al-Khatib, a Syrian opposition activist

“People would pass by the prison, but no one dared look inside,” al-Khatib said.

Aboudehn recalls the first day he entered Tadmur in 1988, nearly a year after he was detained in Damascus for allegedly having contacts with Israel, Syria’s archenemy.

He had to walk blindfolded and handcuffed between two rows of men who kicked, pushed, and beat him with clubs and metal rods. His nose was broken and he bled profusely.

Aboudehn showed the torture marks on both his legs, as well as his permanently dislocated right arm.

He recalls the warden telling a gathering of detainees shortly after they arrived: “You have come to your end, there is no mercy here. God is prohibited from entering the jail. We are God. We decide if you live or die.”

Aboudehn said he was regularly beaten and humiliated during the four years and eight months he spent there. The jailers never referred to him by his real name, calling him “No. 13” instead.

He was held in a cell with about 150 inmates who all shared one bathroom. For food, each prisoner received three loaves of Arabic bread, an olive, and a teaspoon of marmalade a day, as well as one egg that was shared among five inmates.

Prisoners were completely cut off from the outside world, Aboudehn said, recalling that the first time he knew the Berlin Wall fell and the Soviet Union collapsed was in 1993, well after those events happened.

Aboudehn broke down when he recalled looking through a keyhole and seeing a soldier urinating in the food that he and those in his cell were about to eat. He refused to eat but didn’t have the courage to tell the others what he had seen for fear of being killed by his jailers. Instead, he told his fellow inmates that he wasn’t feeling well.

“I decided I will not say anything then, but one day I will go out and tell what the regime used to do with us,” said Aboudehn, bursting into tears. “May God curse this regime and those people who despised humanity!”

When he was moved to Sadnaya Prison, a facility near Damascus where dissidents also were known to have suffered mistreatment, he said it was like “a five-star hotel” in comparison.

Aboudehn, who heads the Committee of Lebanese in Syrian Prisons, regretted the destruction of Tadmur by the ISIS extremists.

“They demolished a historic symbol that should have stayed, because in every room there were people who were killed,” he said.

Blowing up the facility may have been part of attempts by the extremists to gain popularity among those who suffered at the hands of the Syrian government.

A 2001 report by Amnesty International titled “Syria: Torture, Despair and Dehumanization in Tadmur Military Prison” cataloged routine abuses against prisoners, including the use of iron bars, whips, and cables.

“Tadmur Prison appears to have been designed to inflict the maximum suffering, humiliation and fear on prisoners and to keep them under the strictest control by breaking their spirit,” it said.

Blowing up the facility may have been part of attempts by the extremists to gain popularity among those who suffered at the hands of the Syrian government. But residents and former prisoners called it a huge mistake.

Yassin Al Haj Saleh, who spent 16 years in Syrian prisons and wrote a book about his experiences, said he was saddened by the news, “as if they have destroyed my home.”

“I dreamt that I would visit it someday. … I had imagined that visiting the prisons where I spent time would serve as closure,” he wrote on his Facebook page.

Al-Khatib said he and his friends used to dream of entering the prison one day and documenting what happened inside.

Now that Daesh [ISIS] destroyed the crime scene, it is more difficult to know what happened.
— Osama al-Khatib, a Syrian opposition activist

“Now that Daesh destroyed the crime scene, it is more difficult to know what happened,” he said, using an Arabic acronym for ISIS. “I am totally against destroying it, although it represents a dark page of Palmyra and Syria’s history. It should have stayed as a witness to this dark period.”

Syrian opposition figure Radwan Ziadeh wrote on his Facebook page that Tadmur Prison “should have been kept as a museum for future generations as evidence of degradation of human beings during the Assad rule.”

“Daesh turned it into rubble today.”