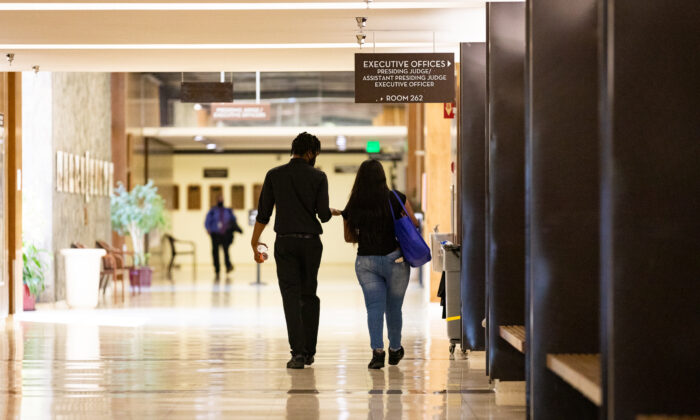 LOS ANGELES—A former Industry city manager charged along with three other people in an alleged corruption scheme pleaded not guilty today to a felony count of misappropriation of public funds.

Paul Jule Philips, 70, is due back in a downtown Los Angeles courtroom Sept. 22 for the start of what could be a two-month hearing to determine whether there is sufficient evidence to allow the case against him to proceed to trial.

Philips has “left his position” as the city manager of Bell, effective Thursday, based on “mutual agreement,” according to a statement issued by the city, which noted that the criminal case does not involve his service with the City of Bell or that city in any way.

“The city has no evidence of any wrongdoing by Mr. Philips in the City of Bell. Nevertheless, it was concluded that it is in the best interest of both parties for Mr. Philips to be separated from the city so he may focus on conducting a vigorous defense of the charge. Accordingly, the council approved a separation agreement and waiver of claims,” according to the city.

Bell Mayor Alicia Romero said in the statement that “the [city] council feels this action is in the best interest of the city and its residents.”

“… We were generally happy with Mr. Philips’s services but his legal situation is a distraction and creates distrust and controversy in the community which is disruptive to the things we are trying to accomplish,” the mayor said.

Hill, who also served in the state Assembly, and Barkett made their first court appearances Tuesday, but their arraignment was postponed until Oct. 27.

Hill is charged with two counts of having a financial interest in a contract or purchase made in an official capacity, while Barkett is charged with one count each of misappropriation of public funds, embezzlement, money laundering, and grand theft.

Bouza is charged with one count of misappropriation of public funds and eight counts of having a financial interest in a contract or purchase made in an official capacity. His arraignment is still pending.

The case stems from the alleged embezzlement and misappropriation of millions of dollars that was to be used to study whether a solar farm was suitable on land to be bought by the City of Industry, according to the Los Angeles County District Attorney’s office.

“Public corruption erodes the trust of our citizenry and hampers progress. There is no place for it in Los Angeles County,” District Attorney George Gascon said in a statement last week announcing the charges.

The City of Industry entered into a land lease agreement between 2016 and 2018 with San Gabriel Valley Water and Power LLC—which was owned by Barkett—to examine a potential solar farm and agreed to advance certain costs that had to be repaid if construction began.

Phillips and Bouza, an attorney hired by the city and a private contractor who allegedly helped draft an agreement, handled the funds, according to the District Attorney’s office.

Roughly $20 million in public funds was allegedly routed to an account controlled by Barkett during that time, in which some of the money was paid to other vendors and about $8.3 million was allegedly spent by Barkett on personal items, according to prosecutors.

Bouza and Hill are accused of having a financial conflict of interest when they allegedly drafted or influenced contracts with the city, according to the District Attorney’s Office, which noted that the case remains under investigation.

In a statement obtained by the San Gabriel Valley Tribune, Mayor Cory Moss said, “For years, the city has alleged that [San Gabriel Valley Water and Power] and related parties submitted false and fraudulent invoices to the city for work that was never performed. It is my hope that the matter moves swiftly and that those who are responsible for this misuse of taxpayer funds are brought to justice.”

Hill served a 46-month prison sentence for his 1994 conviction on federal extortion and money laundering charges stemming from a $2,500 payment he took from federal undercover agents in an FBI sting operation.