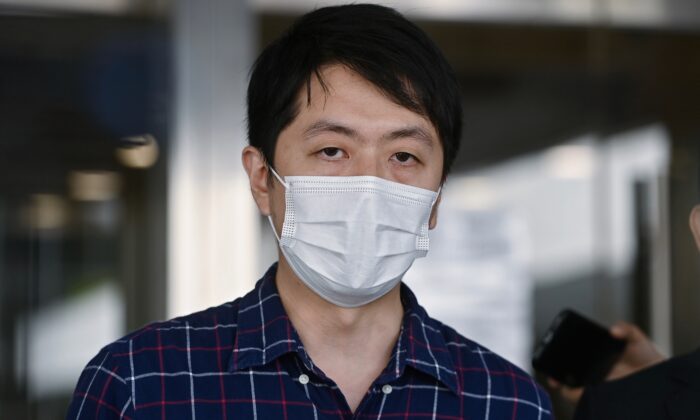 Former Hong Kong Legislative Councillor in exile Ted Hui Chi-fung was doused with water and verbally threatened at a restaurant in Sydney, Australia on Aug 7. He posted on Facebook on Aug. 9 that he received a lot of sympathy and support from Hongkongers after the incident, and he thanked them for their care.

He also revealed that he had called the police and urged the Australian government to conduct an investigation, protect the freedom of speech and personal safety of Hongkongers in Australia, and prevent the infiltration of the Chinese Communist Party (CCP).

Australia-Hong Kong Link issued a statement on Aug. 8 saying that Ted Hui was doused with water and verbally threatened by a Chinese man in a Sydney restaurant on Aug. 7. The man said that if it was not for many people there, he would have beaten  Ted. He also told Ted that he would hit him the next time he sees him.

Ted Hui posted on Facebook on Aug. 9 that he has received a lot of sympathy and support from Hongkongers for this incident. And he thanked them very much for their concern and love.

He said that as a politician, he had encountered people with different political stances abusing him verbally in public, and in general he would respect and listen to their opinions because he believes that they have the right to express their views, but he usually would refrain from responding in order to avoid escalating the conflict. In addition, he did not call the police immediately when the incident happened, as the man’s appearance had been photographed.

However, Ted Hui also said that considering that the incident involved physical attacks and threats of violence, and since he is a public figure, his personal safety involved the public interests of Hongkongers. Therefore he had already reported the incident to the Australian Federal Police and provided information such as a photo of the man, his name, and so on to them.

He revealed that he had been called by the local police (NSW Police) and the Australian Security Intelligence Organization (ASIO) on the morning of Aug. 9.

He said that he had a clear conscience and he did not worry about his personal safety, and he would not abstain from going to any Chinese restaurant or premises, but he would remain alert.

Many netizens expressed their support for Hui by leaving a message under the post. A netizen said, “Well done, calling the police is the correct way to deal with it, and it also protects the safety of other overseas Hongkongers. You must be careful, take care, and stay safe.”

“In fact, it is not only your business, Mr. Hui. If you tolerate them, such people will have no fear, and they will attack other ordinary people with different political stances,” another netizen posted.