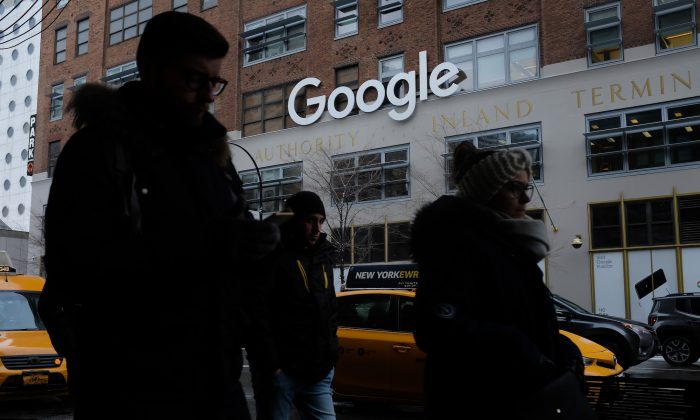 NEW YORK, NY - DECEMBER 30: People walk past a Google office building on 9th Avenue in Chelsea district on December 30, 2017 in New York City. The building, known officially by its address of 111 8th Avenue, is among the city's biggest office buildings and is wholly owned by Google. (Sean Gallup/Getty Images)
US News

James Damore, who was fired in 2017 in the aftermath of the scathing memo, brought forward the class action lawsuit on Jan. 8, the Guardian reported. Appended to the suit are nearly 100 pages of screenshots of internal communications in which employees discuss sensitive political issues.

According to the lawsuit, “Google employees who expressed views deviating from the majority view at Google on political subjects raised in the workplace and relevant to Google’s employment policies and its business, such as ‘diversity’ hiring policies, ‘bias sensitivity,’ or ‘social justice’ were/are singled out, mistreated, and systematically punished and terminated from Google, in violation of their legal rights.”

Damore and lawyer Harmeet Dhillon held a news conference in San Francisco and said the company discriminated against white men who held political views different from those of Google executives.

“Google’s open hostility for conservative thought is paired with invidious discrimination on the basis of race and gender, barred by law,” the lawsuit says. “Google’s management goes to extreme—and illegal—lengths to encourage hiring managers to take protected categories such as race and/or gender into consideration as determinative hiring factors, to the detriment of Caucasian and male employees and potential employees at Google.”

Another former Google engineer, David Gudeman, is also a member of the suit, according to the complaint filed in Santa Clara Superior Court in northern California.

“Damore, Gudeman, and other class members were ostracized, belittled, and punished for their heterodox political views, and for the added sin of their birth circumstances of being Caucasians and/or males,” the suit says.

Damore was sacked last August in the wake of his contentious 10-page memo, published in full on Gizmodo, and has been unemployed ever since.

Widely reported as controversial is his assertion that biological differences are why there are fewer woman engineers.

Google Chief Executive Sundar Pichai denounced the memo for “advancing harmful gender stereotypes.” The company told the Los Angeles Times that it fired Damore for violating its code of conduct.

“We look forward to defending against Mr. Damore’s lawsuit in court,” a Google spokesperson stated in an e-mail.

Google’s workforce, akin to the entire the tech industry, is overwhelmingly white, Asian, and male.

Of its workers, 56% are white and 35% are Asian, while Hispanic and black employees make up 4% and 2%, respectively, according to the company’s latest diversity report.

In 2017, the U.S. Department of Labor accused Google of “extreme pay discrimination” against women, and a group of women have filed a class-action lawsuit alleging systemic wage discrimination.

But the Damore suit says it’s exposing a cultural bias toward promoting diversity and “social justice” that, according to the suit, has created a “protected, distorted bubble of groupthink.”

It charges that efforts to increase representation of women and minorities amount to illegal discrimination against the majority.

Appended to the lawsuit are many examples of internal Google communications that allegedly support the claims.

One of these is a 2014 email from former vice-president of PR at Google Rachel Whetstone:

“It seems like we believe in free expression except when people disagree with the majority view … I have lost count of the times at Google, for example, people tell me privately that they cannot admit their voting choice if they are Republican because they fear how other Googlers react.”

The suit also reveals internal backlash Damore allegedly faced after his memo went viral, including a mass email in which a Google director called the memo “repulsive and intellectually dishonest.”

There’s also reference to an email to Damore from a fellow engineer, the Guardian reported, calling him a “misogynist and a terrible human,” and they would “keep hounding you until one of us is fired.”

According to legal experts cited by the Washington Post, Google the right to fire employees it deems incompatible with the company’s values.

Companies based in the United States—some of which are global entities with employees numbering in the hundreds of thousands—are exempt from the First Amendment’s free-speech guarantees, which are only aimed at the government.