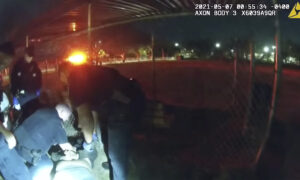 ‘Ex-Girlfriend’ Target Taken Down by Amazon

“Ex-girlfriend” target removed: Online retailer Amazon took down shooting targets designed to look like an “ex-girlfriend,” which bleed when they are shot.

ThinkProgress reported that the target, called “Alexa” and also known as “The Ex,” was produced by Zombie Industries, the same firm that has come under fire for selling a target that looks similar to President Barack Obama. The targets are life-sized mannequins that have the appearance of zombies.

There were a number of petitions for Amazon to remove the “Alexa” products, including one posted on Weareultraviolet.org.

“We are thrilled to see Amazon’s fast response in removing the bleeding ex-girlfriend shooting target from their website,” Nita Chaudhary, with women’s group UltraViolet, stated in press release, according to Business Insider. “The fact that it exists is yet another reminder of what is at stake for women with gun safety legislation. The very presence of a gun in a domestic violence situation increases the chance that the woman will be murdered by 500%. We are fed up, and we demand better.”

Over the weekend, the NRA reportedly told Zombie Industries to remove the Obama-esque zombie target–named “Rocky” from Detroit–from its convention in Houston.

“Someone from the NRA came by and asked us to remove it,” an employee with the company told BuzzFeed.