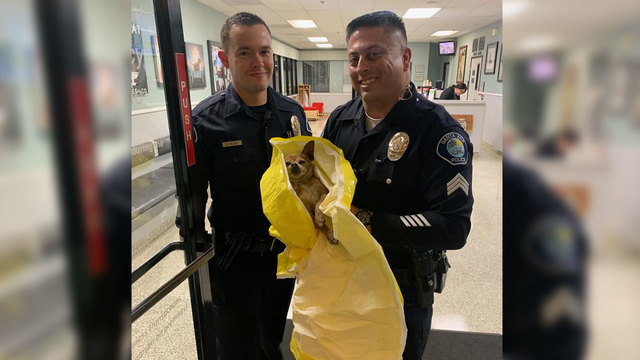 Officers pose with Max, the 10-year-old runaway Chihuahua that had been allegedly bound and beaten by a suspect now in custody in Santa Ana, Calif., on March 3, 2019. (Santa Ana Police Department)
Crime and Incidents

An ex-felon was arrested in California for allegedly beating a tiny Chihuahua named Max, after first binding the animal with cords and wire.

Jose Manuel Pantoja—a homeless man on probation—is suspected of wrapping a bungee cord around the dog’s throat and chest and binding his legs with electrical wires, according to the police.

Santa Ana police Cpl. Anthony Bertagna told CBSLA that at around 10:20 p.m. on Sunday, March 3, an unidentified woman saw Pantoja kicking the tiny Chihuahua behind a WaBa Grill. She called 911.

“The calling party reported a male Hispanic adult had used wires to tie the dog’s legs and was kicking him repeatedly,” the Santa Ana Police Department said in a news release.

“She yells at him to stop but realizes he’s probably on drugs and shouldn’t do this so she calls us and gives us details,” Bertagna told CBSLA. “When we got there, he’s standing over the dog.”

The police said Pantoja told them the dog wasn’t his and had been following him around.

He was booked into the Santa Ana Police Department jail and remains remanded without bond.

Bertagna was cited by KTLA5 as saying that Pantoja has a long criminal record and law enforcement officials had “dealt with him numerous times.”

Court records seen by CBSLA show Pantoja received a sentence of three years probation and one year in jail on a felony. He pleaded guilty to a charge of assault with force likely to produce great bodily injury on Nov. 16, 2018.

Max the Chihuahua suffered a number of visible injuries in the attack and was taken by the responding officers to the Orange County Emergency Pet Clinic for treatment.

Vets cited by KABC said that the dog was expected to make a full recovery.

The police sergeant who responded to the call was a longtime K-9 handler, KABC reported and took a special interest in Max’s case. Officers following up on the investigation were able to locate the dog’s owners.

On Tuesday, Max was reunited with his owners.

“He’s not the same,” said the dog’s owner, according to CBSLA’s Michele Gile, who posted a video of Max’s owners coming to pick him up after the ordeal.

“He basically used the dog as a soccer ball,” Bertagna said of the treatment Max endured at the hands of the suspect.

“He’s not the same”, says his owner- Max the #chihuahua, who was abused, sees family for the first time in a few days- Man is in custody per @SantaAnaPD @cbsla #cbsla pic.twitter.com/dGr2fDdOlu

“I didn’t think I would see him again, but here he is,” said Stephany Chavez, the dog’s owner, according to KABC. “And I’m just glad he’s OK and he’s not any worse than this.”

#UPDATE – After going thru a traumatic event Max🐾 is on the mend and has been reunited with his family! #SantaAnaPD #SAPDK9 #happyending pic.twitter.com/eMkFDeuSJz

Police said the small dog ran away from the family’s yard after someone left the gate open. They were unable to locate Max despite “looking for their dog throughout the night.”

Animal cruelty charges in California—which fall under animal abuse laws, Penal Code 597 PC—can be either a misdemeanor or a felony.

Suspects convicted of PC 597 animal cruelty as a misdemeanor face up to one year in a county jail and a maximum $20,000 fine.

Felony animal abuse in California could result in up to three years in a state prison and the same maximum fine.