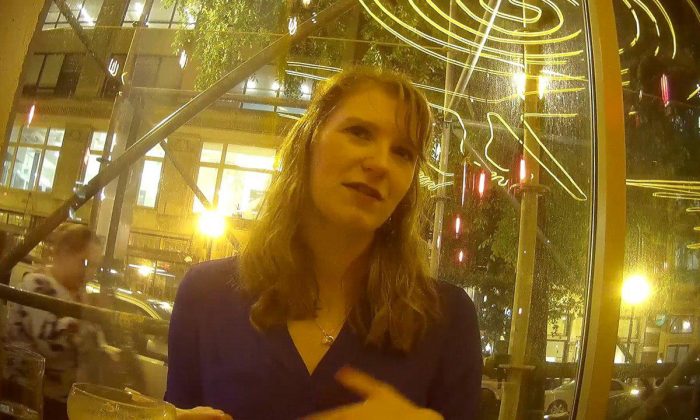 A former federal employee told an undercover reporter that there’s a “resistance movement” inside the federal establishment that’s trying to undermine the administration of President Donald Trump.

To that end, Jessica Schubel says former colleagues were providing her with insider information, including confidential documents, which she acknowledges is probably illegal.

Schubel was a senior policy adviser at the Department of Health and Human Services (HHS) during the Obama administration. She had joined the department’s Centers for Medicare and Medicaid Services in July 2010, according to her LinkedIn profile, and including a year-long pause, she remained at the agency until Jan. 19, 2017, the day before Trump’s inauguration.

Speaking to an undercover reporter with Project Veritas, she said she had “a few” friends who still work at HHS.

“Can they, like, [expletive] him [Trump] over?” the reporter asked.

“No, but they give me information,” she replied.

When her friends write policies for the HHS, they sometimes gave her a heads-up, she said.

Receiving insider information is important to Schubel professionally. After leaving the government, she landed a job as a senior policy analyst at the Center on Budget and Policy Priorities (CBPP), a progressive think-tank, where she serves as an expert on issues related to Medicaid.

“It’s kind of like the Nixon ‘Deep Throat’ type of thing,” she said.

Deep Throat was the code name used by reporters for late FBI Associate Director Mark Felt, who fed them insider details from the Nixon administration that helped reveal the Watergate scandal.

In a different sort of heads-up than Watergate, Schubel’s friend sent her an internal version of an HHS policy that allows states to require that Medicaid beneficiaries work. That policy wasn’t yet public at the time.

Schubel described how a friend of hers working for the federal government provided her confidential documents and tried to avoid detection by using snail mail.

“I had another friend that was actually still there and she would print things and then mail me a copy,” she said.

She explained the friend “definitely wasn’t supposed to” because “it was confidential.”

“So your friend mailed you confidential government information that is illegal to mail,” the reporter asked.

“And then you were able to write about that,” the reporter asked.

It’s the advance knowledge that helps her and others to more effectively counter Trump’s agenda, she said.

“I actually was talking to someone before, like, I left my house. And he was just telling me what’s going on and what they were thinking and policy stuff,” she told the reporter.

“It helps me because then I can tell other people. And then we’re all prepared for when it happens, and then we can do something about it.”

Based on Schubel’s description, her sources likely violated the Basic Obligation of Public Service statute, which says that federal employees “shall act impartially and not give preferential treatment to any private organization or individual.”

“These allegations are deeply concerning,” an HHS spokesperson told The Epoch Times via email. “Individuals who share sensitive information for their own personal gain or motives, hinder our mission at the department to enhance and protect the health and well-being of all Americans. These alleged actions are not only unacceptable, but possibly illegal, and warrant a swift and thorough investigation.”

Project Veritas released clips from their undercover videos with Schubel on Sept. 19. The video also featured Justice Department employee Alison Hrabar, who told an undercover reporter that she and other federal employees have been plotting resistance against the Trump administration from within. She also described what appeared to be an illegal use of government resources for her political activities.

Hrabar is a member of the DC Metro chapter of Democratic Socialist of America (DSA). Project Veritas infiltrated the organization and secretly filmed some of its members.

On Sept. 18, Veritas released a video showing State Department employee Stuart Karaffa boasting about how he routinely conducts political work for DSA during his work hours. The State Department responded by saying that it’s looking into the matter.

Veritas promised more exposés of this sort in the near future as part of its series on the Deep State—holdovers in the federal government from previous administrations who try to undermine the current one.

“The lack of accountability has led to these federal ‘workers’ not being afraid to be fired for anything and certainly not for their illegal and unethical behavior,” Veritas President James O’Keefe said in the latest video.