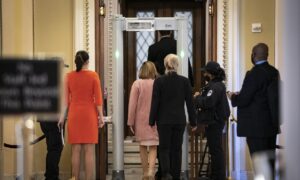 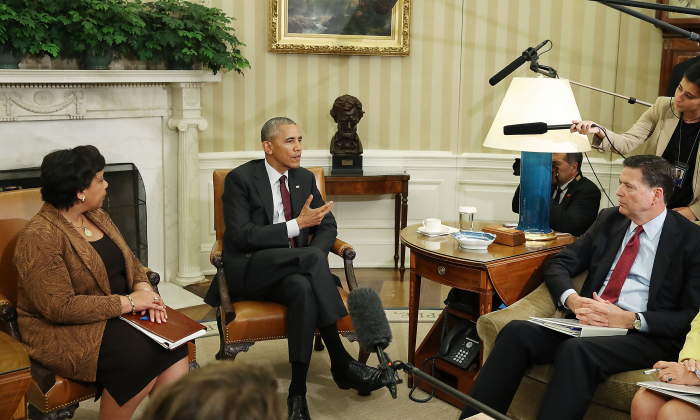 Then President Barack Obama (C) speaks to the media after meeting with then Attorney General Loretta Lynch (L) and then FBI Director James Comey in the Oval Office at the White House in Washington, on July 19, 2016. (Mark Wilson/Getty Images)
Politics

A controversial and classified document, alleging potential misconduct by former Attorney General Loretta Lynch, resurfaced on Dec. 7, suggesting lawmakers may press Lynch about the memo during her own deposition.

While the contents of the document remain classified, media leaks suggest it includes an email from then-chair of the Democratic National Committee Debbie Wasserman Schultz to Leonard Benardo of the Open Society Foundations, the nonprofit organization run by billionaire Democratic fundraiser George Soros. The email shows Lynch assured Clinton-campaign staffer Amanda Renteria that the FBI’s investigation into Hillary Clinton’s unauthorized access to the private email server would not “go too far.”

U.S. intelligence agencies obtained the email from stolen material stored on Russian networks and handed it to the FBI, according to The New York Times.

Lynch denied knowing Renteria or ever discussing the Clinton-email investigation with her. Renteria likewise denied the claim made in the supposed email.

In a series of bipartisan letters in June 2017, Senate Judiciary Committee Chairman Chuck Grassley (R-Iowa) and Ranking Member Dianne Feinstein (D-Calif.) asked Benardo, Renteria, and Lynch about the supposed email. Grassley also requested a (pdf) copy of the document from the Justice Department.

Comey said the document was one of the factors that led him to break from established protocol and announce the exoneration of Clinton in a press conference. During his transcribed deposition (pdf) on Capitol Hill on Dec. 9, Comey answered questions about the document to both a Democrat and a Republican.

“[I’ve] tried to be very careful in public comments about this. There was material that had not been verified that I believed, if it became public, would be used to cast doubt on whether the Attorney General had acted appropriately with respect to the investigation,” Comey said in response to a question from Rep. John Ratcliffe (R-Texas) about the document on Dec. 9. “I don’t think I’m allowed to go beyond that in characterizing that material.”

“So far as I knew at the time, and still think, the material itself was genuine, which is a separate question, though, from whether it was what it said was accurate,” Comey added in response to a question from Rep. Steve Cohen (D-Tenn.).

Comey had previously written about the document in his book, explaining that he made the exoneration announcement because of a “development still unknown to the American public” that “cast serious doubt” on Lynch.

During his testimony, Comey agreed disclosing information in the document to the public would “have caused some to question the objectivity of the Department of Justice (DOJ).”

According to Comey, Lynch and then-Deputy Attorney General Sally Yates were briefed on the contents of the document. The FBI then interviewed Lynch about the matter, although he was not present, Comey said.

If, since last year, the FBI or lawmakers had of found a way to verify the accuracy of the document, it would prove that Obama administration officials at the highest level were using their power to further a political agenda. The finding could be especially devastating since it could implicate the head of the Justice Department, an entity traditionally independent of The White House and politics.

Lynch’s actions are behind three of the main reasons that Comey cites for announcing that no charges will be brought against Clinton. The usual protocol is for the Justice Department, not the FBI, to make a determination about bringing charges. Neither the FBI nor the DOJ announce details of investigations that do not result in prosecution.

Comey said he decided to make the announcement because of the way Lynch’s tarmac meeting with Bill Clinton could be perceived. Lynch had also told Comey to refer to the Clinton investigation as a matter.

FBI Special Agent Peter Strzok, one of the officials who interviewed Clinton, said in notorious messages with his FBI mistress in the months before the interview that then-candidate Trump was a “loathsome human” and that Clinton should win the election “100 million to zero.”

According to questions Rep. Trey Gowdy (R-S.C.) directed to Comey, a second unnamed FBI agent wrote to an FBI colleague after interviewing Clinton that “I’m done interviewing the President.” When the employee asked, “you interviewed the president?” The agent wrote back, spelling the initials for Hillary Rodham Clinton, “you know, HRC.”

Comey confirmed for the first time on Dec. 7 that Strzok and his FBI mistress, Lisa Page, helped him draft the statement to exonerate Clinton. Text messages between Strzok and Page show they spoke about stopping Trump from becoming president and discussed an insurance policy in the event he does.