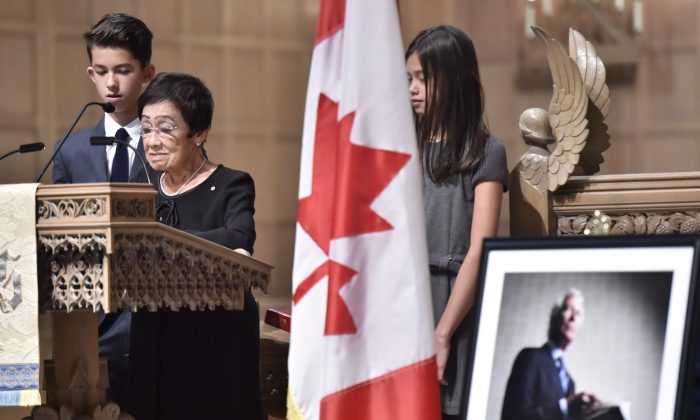 Flanked by her grandchildren, Pat Taylor, Ken Taylor’s widow, speaks at the funeral of the former diplomat in Toronto on Oct. 27, 2015. Taylor was Canada’s ambassador to Iran in 1979 when he helped six Americans escape the country during the hostage crisis. (The Canadian Press/Nathan Denette)
Canada

TORONTO—Family, friends, and dignitaries that included prime minister-designate Justin Trudeau and one of his predecessors, Joe Clark, paid tribute on Oct. 27 to Ken Taylor, Canada’s former ambassador to Iran who garnered international fame for helping six Americans escape the country during the 1979 hostage crisis.

The ceremony, kept light in accordance with Taylor’s wishes, heard him described as a fun-loving, generous man with a taste for fine brandy and a fierce loyalty to his friends.

“My grandfather was simply a legend,” granddaughter Kassia told those gathered in the large mid-town Timothy Eaton Memorial Church.

Taylor, 81, died on Oct. 15 in New York after being diagnosed in August with colon cancer, his wife Pat by his side.

Clark, who authorized the November 1979 mission that saved the Americans from an Iranian mob that had stormed the U.S. embassy in Tehran, said Taylor’s courage earned the admiration of people around the world.

“Yet, it was a very Canadian thing to do,” Clark said, adding that Taylor had an “instinct to be gracious.”

Taylor hid the Americans at his residence and at the home of his deputy in Tehran for three months. He persuaded Ottawa to issue them Canadian passports and arranged their plane tickets.

While Taylor’s Iran exploits are well known, it was his more personal side that family, friends, and colleagues recalled with such fondness.

What became known as the “Canadian Caper” was the subject of a book and more recently the Hollywood blockbuster “Argo.” Taylor criticized the movie for failing to give proper due to Canada’s role in the crisis.

“Sure, it could have gone wrong,” Clark said before the service. “Nonetheless they took the risks that had to be taken.”

While Taylor’s Iran exploits are well known, it was his more personal side that family, friends, and colleagues recalled with such fondness during the celebration of his life, for which several hundred people turned out.

They praised him as someone with a brilliant mind and near photographic memory—someone who was “magically charming” and yet had a complete absence of self-importance.

Pat Taylor, his scientist wife of 55 years, called him her best friend, confidante, and adviser.
“He took everyone at face value and made many friends,” Taylor said.

In a clear, strong voice, she described him as compassionate and caring, someone who felt badly for his oncologists because they had been unable to do more for him.

Other speakers offered humorous anecdotes of their long friendships, while Rev. Andrew Stirling, who presided over the service, recited Psalm 100, which is normally reserved for weddings but was fitting in its “joy and praise.”

Long-time colleague Malcolm McKechnie said Taylor, who had also served in places such as Afghanistan, Guatemala, London, and Detroit, seemed to know everyone. He was a valuable, fun-loving mentor who had dignity and class, McKechnie said.

After leaving Iran, the Calgary-born Taylor, moved to New York as Canada’s consul general. He was later invested as an Officer of the Order of Canada.

Son Douglas said his father lived for the moment and had no time for regrets.

“I miss you so much, it is heartbreaking,” Douglas said “But every time I think of you, I smile.”

After Taylor’s death, American ambassador to Canada Bruce Heyman hailed his “valour and ingenuity” that earned him the Congressional Gold Medal.