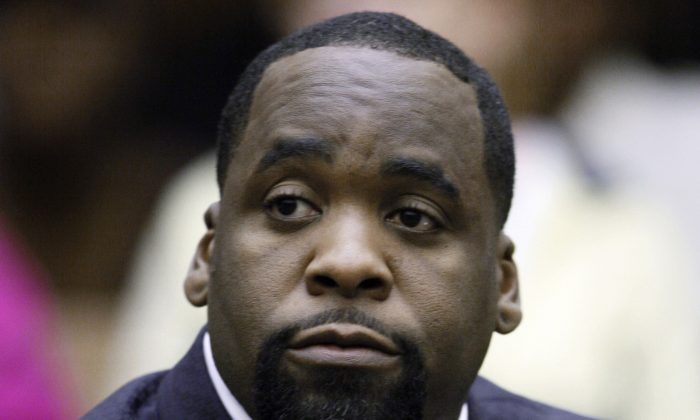 Kilpatrick claims that the situation has been common knowledge among government officials since 2004, and that Snyder has been aware of it for years.

“When the current Governor of Michigan says that he ‘only recently was made aware of this issue,’ he is being misleading at best. But more than likely, he is being viciously, aggressively, and deliberately untruthful. I pray that the truth comes out. That’s what everyone in Michigan wants right? The Truth! Well, my prayer is that you all will have an opportunity to warm yourselves at the fire of Truth,” Kilpatrick wrote in a letter that was posted on a friend’s Facebook page.

Kilpatrick also said that the former Michigan governor “was well aware of the issues with the Flint Water Department, and their inability to produce contaminant free water moving forward, nor afford the equipment & technology to do so.”

Kilpatrick is currently serving a 28-year prison sentence after being found guilty of two dozen crimes in 2013, including tax evasion and bribery.

“I am here in prison, with a 28-year sentence, for a case where there is NO EMBEZZLEMENT, NO MISUSE OF PUBLIC FUNDS, NO BRIBERY, NO STEALING OF ANY MONEY, as a matter of fact, NO PUBLIC MONEY AT ALL. And NO CHARGES THEREOF! 99% of Detroiters have NO idea why I’m here. They don’t know the charges, nor what I’m sentenced for. They sure do know the rumors,” Kilpatrick added.

“I wonder how much time you get for knowingly & actually delivering unsafe, dangerous, and poisonous drinking water to the people you represent? Which in-turn causes deaths, permanent illnesses, and disabilities. Can you actually be hated, hurt, and imprisoned for ridiculous rumors about murder…and not be for actually killing people? I pray for justice for the people of Flint!”

Snyder recently addressed the Flint crisis during his State of the State, saying: “I’m sorry and I will fix it,” according to the Detroit Free Press.

“You did not create this crisis, and you do not deserve this,” he added.

“Government failed you at the federal, state and local level. We need to make sure this never happens again in any Michigan city.”