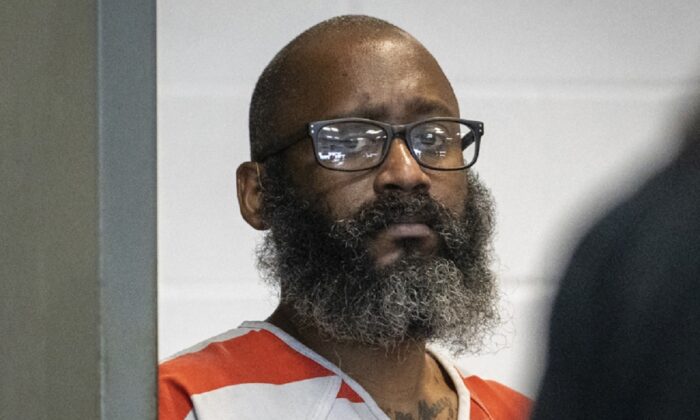 Stephen Broderick enters the 299th District Courtroom to plead guilty and receive a sentence for the 2021 murder of his ex-wife, Amanda Broderick, teenage stepdaughter Alyssa Broderick and his stepdaughter's boyfriend, Willie Simmons III, in Austin, Texas, on Sept. 13, 2022. (Sara Diggins/Austin American-Statesman via AP)
Crime and Incidents

Ex-deputy Gets Life in Prison for Killing Ex-Wife, Stepdaughter, Man

AUSTIN, Texas—A former Texas sheriff’s deputy has been sentenced to life imprisonment without parole for killing his ex-wife, teenage stepdaughter and the stepdaughter’s boyfriend.

Prosecutors set aside a possible death penalty in exchange for the guilty plea.

The ex-deputy killed the three during a custody visit with his son, whom he didn’t shoot. Stephen Broderick was free on bond at the time of the shooting after being charged the year before with the sexual assault of a child and losing his job as a result.

Stephen Broderick was ordered to wear a GPS tracking device, but state District Judge Karen Sage ordered the removal of the device five months after his release, the Austin American–Statesman reported. Prosecutors dropped the sexual assault charge as part of Broderick’s plea deal. Amanda and Alyssa Broderick’s family said the dismissal denied justice to Alyssa, who was the victim of the sexual assault.

But prosecutors said they doubted they could obtain a conviction on the charge because the victim was dead.

Sage, who passed the sentence on Broderick, expressed sympathy with their anger.

“I wish I could bring you justice,” Sage said. “But the truth is, the loss you’re suffering, there’s nothing I can do to make that loss go away. It’s the best we can do in the system we have, and it’s never enough. My heart goes out to you. Three beautiful, wonderful people—I see their lives shine on through all of you. I hope that at some point you can find some peace.”