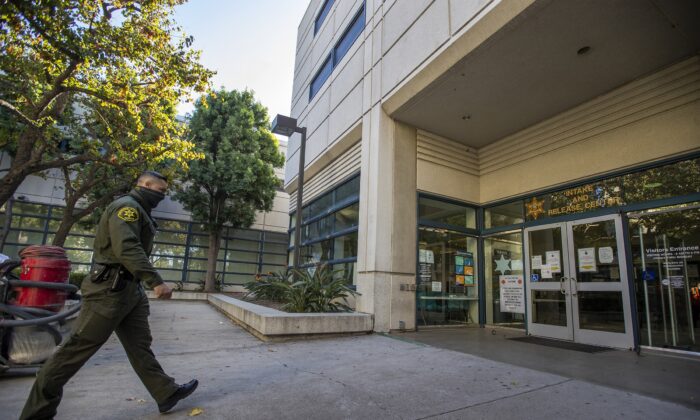 Guadalupe Ortiz, 47, faces one count each of felony assault or battery by a public officer, and felony battery with serious bodily injury, the Orange County district attorney’s office said Monday. Ortiz faces as many as four years in state prison if convicted on both counts.

“The law imputes a special duty of care on custodial personnel, and in this case the sheriff’s deputy completely breached that duty and crossed the line into criminal conduct,” said Orange County District Attorney Todd Spitzer. “As district attorney it is my responsibility to hold sheriff’s deputies and other jail staff accountable when they fail to properly protect those in their care. And now a deputy is throwing away a 22-year-career for inflicting unnecessary harm on a mentally ill inmate out of frustration.”

A different deputy was trying to get the incarcerated man to move his hands out of the way so that he could close the door to the man’s cell, prosecutors said. Ortiz and a third deputy offered to help.

Around 12:28 p.m., Ortiz used a hot water dispenser to fill a cup with scalding water, prosecutors said. When the man didn’t move his hands, Ortiz allegedly poured the water on the man’s hands, causing him to immediately retreat into the cell.

One of the deputies closed the door and the trio left, prosecutors said.

The incarcerated man was left alone without medical care until 7 p.m., about 6 1/2 hours later, when another deputy spoke with him during a standard security check and requested medical attention, prosecutors said.

One of the incarcerated man’s arms was red and his skin was peeling, prosecutors said. He suffered first- and second-degree burns to his hands.

Ortiz was an Orange County sheriff’s deputy for 19 years and previously served as a sheriff’s special officer for three years, prosecutors said. He was fired Friday.

After investigating the incident, the Sheriff’s Department submitted a case for filing consideration to the district attorney’s office, said Carrie Braun, the department’s public affairs director.

“The actions of former Deputy Ortiz were an isolated occurrence and are not indicative of the high level of care provided to inmates in O.C. Jail custody,” Braun said in a statement.

The former deputy is scheduled to be arraigned Jan. 11.