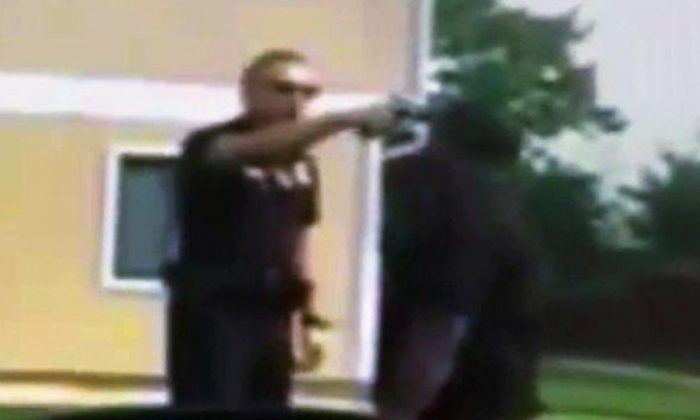 UPPER MARLBORO, Md.  — A former police officer who held a gun to a man’s head over alleged illegal parking was sentenced to five years in prison Friday.

Officer Jenchesky (jin-CHEHS’-kee) Santiago was convicted by a judge of two counts of assault, a handgun offense and misconduct in office.

Last month, Prince George’s County Police released cellphone video of the incident showing Santiago holding a gun to a man’s head and ordering him to get back inside a car. Prosecutors say Santiago had accused the man of parking illegally when he had not.

No one was injured in the May 2014 incident in Bowie, a Maryland suburb of Washington.

Prosecutors say William Cunningham was in a car with his cousin when Santiago repeatedly asked the men what they were doing and insisted that they were illegally parked, which prosecutors said was not true.

The cellphone video shows Santiago holding a gun to a man’s head and ordering him to get back inside a car.

“He’s not the guy you see in the video,” Santiago’s fiancee Ashley Armstead told the judge. “Everyone is making him seem like he is some sort of monster and he is not that person.”

Cunningham said in court Friday that he was pleased with how county authorities handled his complaint, The Washington Post reports. He said he is working with lawyers on a civil case.

Santiago did not speak at his hearing. He was suspended without pay when he was indicted in March. Police spokeswoman Julie Parker says Santiago was fired last month.