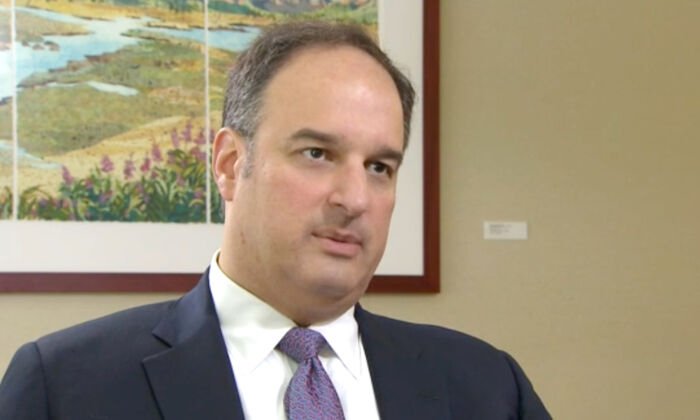 A lawyer who worked on Hillary Clinton’s 2016 presidential campaign and is set to go on trial for allegedly lying to the FBI about not representing the campaign when he passed allegations about Donald Trump to federal officials is objecting to jurors being asked if they have links to the campaign’s promotion of the Trump–Russia collusion narrative.

The lawyer, Michael Sussmann, 59, and special counsel John Durham’s team have agreed on some juror questions, including asking about their hobbies, whether they’ve ever been involved in politics beyond voting in elections, and whether they have worked or volunteered for, or contributed to, any of the 2016 presidential campaigns.

However, the parties each have other questions they want asked of jurors that the other side doesn’t want included, Sussmann told the judge overseeing the case through his lawyers.

Sussmann wants to ask jurors to be specific about any education or training they’ve completed past high school, whether they voted in the 2016 election, whether they considered working in law enforcement, and whether they currently hold or have ever applied for security clearance.

Jurors will already be asked if they, a family member, or a close personal friend knows or has connections to certain individuals or entities. That list, according to the agreed-upon questions, includes Alfa Bank, about which Sussmann gave an FBI official information that alleged Trump’s company and the Russia-based bank had been secretly communicating. That claim was debunked by the Department of Justice’s inspector general, and former special counsel Robert Mueller, among others. The bank has consistently denied collusion allegations.

Durham’s team wants to append three more entities onto the list: the Georgia Institute of Technology, whose researchers allegedly helped spy on the Trump White House, and Zetalytics and Packet Forensics, who some believe are companies earlier said by prosecutors to have searched for derogatory information on Trump.

The special counsel’s office also wants to ask jurors whether they, relatives, or close friends participated or had any link with “any other government agency, group, organization, committee or subcommittee, public or private group or organization, including any media group or organization that has investigated or made inquiry into” the Clinton campaign’s and/or the Democratic National Committee’s (DNC’s) promotion of allegations that Trump and his campaign colluded with Russian actors.

Clinton’s campaign and the DNC helped pay for the dossier compiled by ex-British spy Christopher Steele that contained salacious but unsubstantiated allegations against Trump. The dossier has since been largely debunked, with other components remaining unproven.

Durham’s team is investigating the origins of the U.S. government’s investigation of the collusion allegations. Mueller’s team found no evidence of conspiracy or coordination between Trump’s campaign and Russian actors.

Sussmann’s lawyers didn’t say why the attorney objects to the proposed questions, nor did the filing indicate why Durham’s team is protesting against some of the queries he wants jurors asked.

The next hearing in the case is scheduled for March 31 at 10 a.m.; Sussmann has pleaded not guilty.