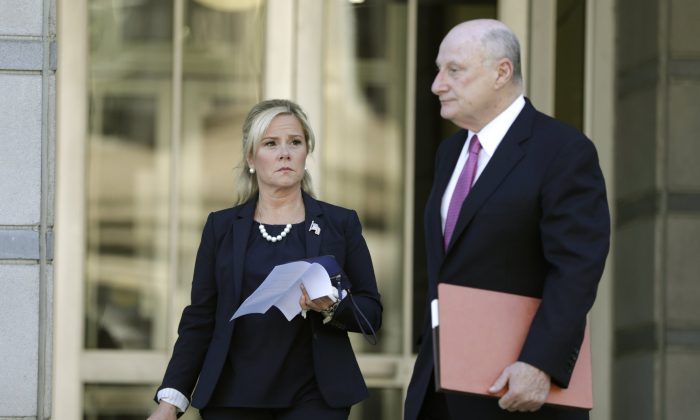 NEWARK, N.J.—A onetime aide to former New Jersey Gov. Chris Christie was resentenced on April 24, to 13 months—down from 18—for her role in the George Washington Bridge lane-closing scandal.

Bridget Kelly, dabbing her eyes with a tissue at points during the resentencing hearing in federal court in Newark, cried as she asked the judge to consider the impact on her children and impose a sentence of home confinement.

“I do ask you today to consider what my four children have been through over the past five years,” Kelly said in court.

She and co-defendant Bill Baroni were convicted in 2016 in what prosecutors and a co-conspirator said was a plot to cause traffic jams near the bridge to punish a mayor who wouldn’t endorse Christie’s reelection.

Kelly’s attorney Michael Critchley asked the court to consider the emotional and psychological effects the trial had on Kelly and her family, saying that that amounted to punishment.

“The shrapnel of Bridgegate that affects the Kelly family is embedded. It’s gonna be there forever,” he said.

He also questioned why Christie, Wildstein and two other former officials, whose names came up during the trial but who went unindicted, seemed to face no punishment.

Assistant United States Attorney Vikas Khanna argued that a sentence of 13 to 18 months was necessary to send a message to the public that the wrongdoing Kelly was convicted of is unacceptable.

U.S. District Judge Susan Wigenton, who presided over the trial, opened Wednesday’s proceedings by noting that she was “extremely familiar” with the facts and added later that the underlying facts before the court had not changed.

Last fall, a federal appeals court threw out some of the counts against Kelly and Baroni but upheld the most serious ones.

Baroni had his sentence reduced from 24 months to 18 months in February and has begun serving his term.

Kelly was initially sentenced to 18 months. She and Baroni both have petitioned the U.S. Supreme Court to hear their appeal of their convictions.

Kelly was Christie’s deputy chief of staff in 2013 when, prosecutors alleged, she, Baroni and David Wildstein conspired to close access lanes to the bridge over four days to create gridlock in the town of Fort Lee, whose Democratic mayor had declined to endorse Christie, a Republican.

Kelly authored the infamous “Time for some traffic problems in Fort Lee” email the month before the lane realignment went into effect.

Baroni, a former New Jersey state senator, was appointed by Christie as deputy executive director of the Port Authority of New York and New Jersey, which operates the bridge as well as tunnels, airports, ports and the World Trade Center.

Wildstein, a high school acquaintance of Christie’s who worked for Baroni at the Port Authority, pleaded guilty and testified for the prosecution. He was sentenced to probation and currently publishes a website on New Jersey politics.

Kelly and Baroni were convicted of wire fraud, conspiracy and civil rights counts. The 3rd U.S. Circuit Court of Appeals threw out the civil rights counts in November, ruling that a right to intrastate travel is not guaranteed under current federal law.

Though Christie wasn’t charged, he was contradicted by several witnesses who testified during the trial. The ensuing publicity helped derail Christie’s efforts to be the GOP’s 2016 presidential nominee.

Kelly’s attorneys have argued in court filings that while the actions of their client and Baroni may have been ethically questionable, they weren’t illegal because neither derived personal benefit and the bridge was still being used for a public purpose.

They’ve also contended the trial judge erred when she ruled jurors didn’t have to believe the lane realignment was for a political purpose in order to find the defendants guilty.