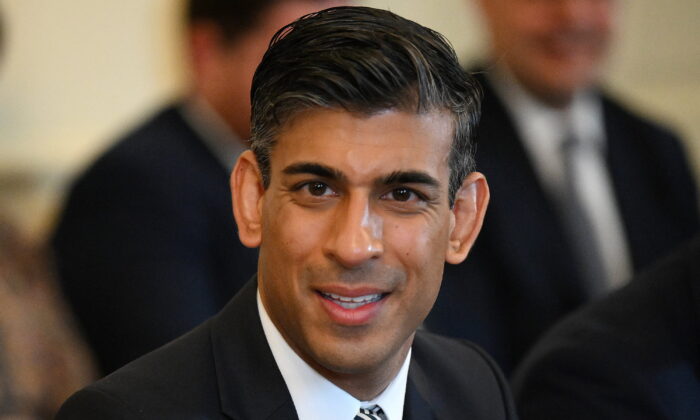 Chancellor of the Exchequer Rishi Sunak during a Cabinet meeting at 10 Downing Street, London, on May 24, 2022. (Daniel Leal/PA Media)
UK

Britain’s former Chancellor of the Exchequer Rishi Sunak has announced he will stand in the Conservative Party leadership contest, promising to “rebuild trust” following Boris Johnson’s scandal-laden term in office.

Sunak, whose resignation as chancellor on July 5 helped to trigger an avalanche of ministerial resignations, announced his decision on Twitter saying: “Let’s restore trust, rebuild the economy, and reunite the country.”

In a three-minute video launching his campaign to be leader of the Conservative Party, Sunak said Britain has given his family “the chance of a better future.”

I’m standing to be the next leader of the Conservative Party and your Prime Minister.

“I got into politics because I want everyone in this country to have those same opportunities, to be able to give their children a better future,” he said.

“Our country faces huge challenges, the most serious for a generation. And the decisions we make today will decide whether the next generation of British people will also have the chance of a better future.”

He said: “Someone has to grip this moment and make the right decisions. That’s why I’m standing to be the next leader of the Conservative Party and your prime minister.”

Sunak stressed his experience during the CCP (Chinese Communist Party) virus pandemic, saying that he “ran the toughest department in government during the toughest times.”

In an effort to keep the economy afloat during lockdowns, Sunak turned on the spending taps to protect jobs through the furlough scheme. Though it went against his instinct as a low-tax Thatcherite Conservative, it did boost his popularity.

But his legacy has proved controversial within Conservative circles. Even before he made his formal announcement, Sunak had come under fire from Johnson loyalists, with Brexit Opportunities Minister Jacob Rees-Mogg denouncing him as a “high tax chancellor” who failed to curb inflation.

Sunak had resisted pressure from Number 10 to cut taxes, arguing it would simply fuel rising prices. In his video, he said the government could not afford to lull voters about the difficulties ahead with “comforting fairy tales.”

“Do we confront this moment with honesty, seriousness, and determination, or do we tell ourselves comforting fairy tales that might make us feel better in the moment but will leave our children worse off tomorrow?” he said.

Sunak suffers from a number of other vulnerabilities. His reputation was dented in recent months following disclosures that his wife Akshata Murty, who is the daughter of an Indian billionaire, had a non-domiciled status for tax purposes.

He was also implicated in the “partygate” scandal and was fined, along with Boris Johnson and his wife Carrie, by the Metropolitan Police for attending the prime minister’s birthday party which was held in violation of COVID-19 lockdown regulations.